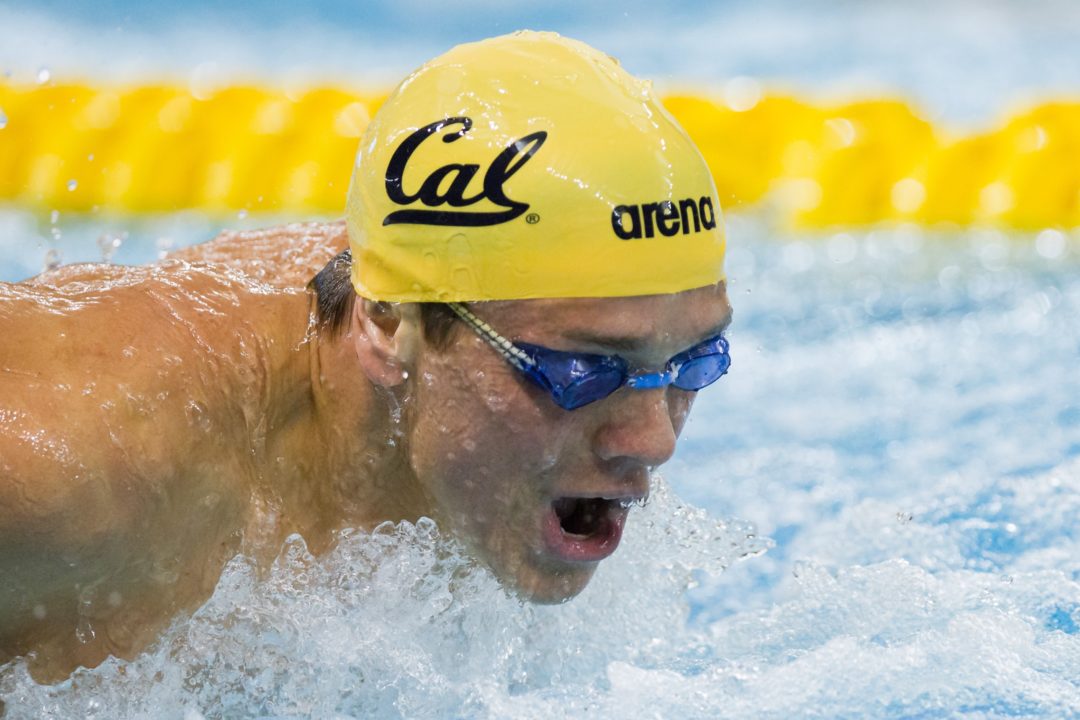 Tom Shields has won the 100 fly title, and the 100 back title, but never in the same year. Will he take either this year? (Photo Courtesy: ©Tim Binning/TheSwimPictures.com

Day 2 of the Men’s NCAA Championships will lack a whole lot of suspense. There isn’t really a race where there’s more than one or two contenders for the title, and in many cases there’s a clear favorite. Of course, there’s always big surprises at meets of this level, so we’ll see who emerges at this meet.

Arizona is really the only complete 200 medley relay in this field, so it’s another wide-open field for competition. Stanford and Texasall lack a sprint breaststroker, though they have outstanding 200 breaststrokers. Auburn lacks a sprint butterflier, though if Marcelo Chierighini repeats what he did in the SEC’s, they could certainly be in that top 2. Just because Arizona is “complete” doesn’t mean that they’ll run away with this relay. Texas has the big hammer Jimmy Feigen at the end of this relay. I think Feigen could split an 18.3 or better on this anchor, and that can make up for a lot.

This 400 IM field is frankly not very good this year. It wasn’t great last year, and 5 swimmers from the A-Final either graduated or chose not to swim the race at this year’s meet (Cal’s Martin Liivamagi). I’m pretty confident that the top two will be Thompson and Whitaker. I don’t know if Thompson will be as fast as he was mid-season, but I think he’s still made enough progress this year to win.  Gemmell was a B-Finalist in this race at his last NCAA Championship meet in 2010. He’s a much better swimmer now than he was then, so I don’t think that top-5 is out of the realm of reason for him.

Someone is going to surprise and finish in the top 6 this year, much like Florida’s Michael Joyce did last season.

Shields is way ahead of the rest of the country in the 100 fly this year. This event will be between him and the record. Madwed is best known for his 200 fly, but he’s really gotten some great quickness overall this year. Cody Roberts from UNLV is the number-3 seed, but he usually struggles to hold his speed at this meet. To round out the top 5, I was torn between Fletcher and his teammate Wojchiechowski, but Fletcher has the better history of the two. USC’s women nailed their taper, and based on what we saw from Cristian Quintero at last week’s South American Championships, the men are too. Bloch is a huge key to their relays, especially that 400 medley.

I also like Virginia Tech’s Greg Mahon and Kentucky’s Lucas Gerotto in this race.

This race is scary-thin. There are literally only three scorers from last year’s NCAA Championships who are back at the meet this year. 8 graduated as seniors, 1 was not given more eligibility, 1 is redshirting for the Olympics, 1 is suspended, and 2 are kind of mysteriously gone. Karasek returns, but was only 16that last year’s NCAA’s. He’s swimming well though, and should be in the 1:34 range. There’s going to be a chance for a ton of swimmers to make names for themselves in this race. Hill versus Colupaev could be the mano-e-mano race of this meet. USC could have a second swimmer in the top 8 as well in Cristian Quintero.

Clay Youngquist is only a freshman, but in this field has a huge opportunity. He hasn’t been close to the time he went as a senior in high school. A big drop is in store for him. John Dalton of A&M was in the top 20 in this race last year. Though he’s made a bigger impact in the 100 this year, he should also be a very good 200 freestyler. It didn’t look like it at Big 12’s, but that 200 may show up at this meet.

Same team, different winner. I think that Cal takes their 5th-consecutive NCAA Title in the 100 breaststroke. This will be the most competitive final of the meet, however. Mickelson has looked really strong this year. Almerida is the only member of the Louisville program that didn’t seem to taper pretty fully for the Big East Championships, and he posted huge drops at NCAA’s last season. Cordes is the top seed and broke Koon’s NAG Record mid-season, but it’s going to be tough for him to repeat that in this race.

Don’t miss Lovelace buried down in the psych sheets. He’ll be swimming out of the 2nd heat in this race, but if he can overcome that into the A-Final, he could be top 5.

Shields is the defending National Champion in this 100 back, but on his second race of the finals session, it’s unlikely that he’ll be able to hold off the super-freshman David Nolan. Cole Cragin has great underwaters, and we saw in the women’s meet how important that can be in yards swimming. Either Arizona backstroker (Friedemann or Chitwood) could place in the top 5 in this race, but this has always been Chitwood’s toughest race at NCAA’s.

Texas may have to freshmen on this relay, but they also have one of the best two 200 freestylers in the country (Hill), and a senior in Caskey who’s swimming extremely well. Those two freshmen also happen to be dynamite. The only catch here is that they bombed this relay last year, for no reason in particular (Hill split a 1:35.3). USC’s two freshman (Bobrosky and Quintero) are both swimming well enough to replace the Trojans’ losses, but this relay would be really awesome if they would scratch Feigen from the individual 200 and swim 5 relays instead.

Stanford wouldn’t use Nolan on this relay if they didn’t intend on being top 3 at a bare minimum, and Virginia and Michigan are a pair of conference champions who pride themselves on exceeding in this event.

If you told someone at any time in the history of the A&M program that this 800 free relay would be their best, you would have been laughed at. But as it turns out, this season it seems to be. For the same reasons as mentioned with Dalton above, they could move up off of their 9th seed.

Auburn is definitely lacking sprint butterfly. The fastest 50 fly split in the country could spell trouble for them.