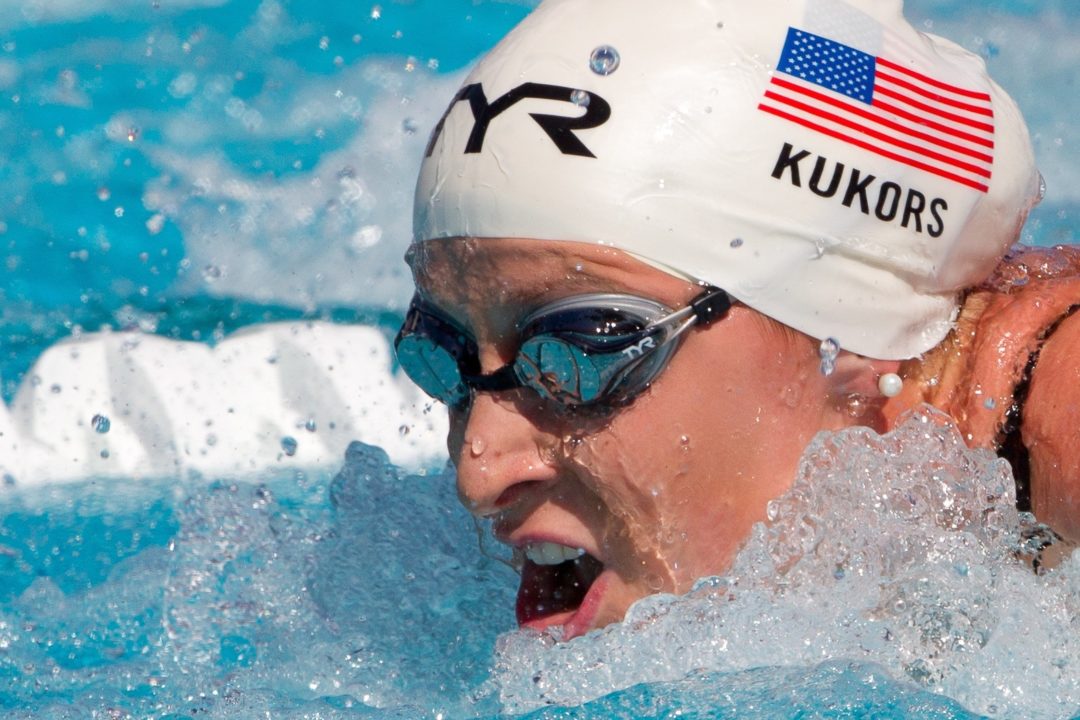 Whenever a meet in the Speedo Championship Series lands in a region like North Carolina, Florida, Texas or anywhere on the West Coast, where post-grads congregate for their swimming, the meets become much more than the high school championships that they are in some areas. The pros love to take advantage of the opportunity to have decent races at well-run meets without having to take big trips and lose a lot of training time.

The Orlando Sectional Championship Meet is one of those big events, and this year’s was no different.

The big headline is that this is the debut of Ariana Kukors training under the flag of the Bolles School in Jacksonville, Florida. We haven’t seen much of her since last year’s World Championships, and presumably her move was part of that, but in this first meet she looked pretty good. She first won the 200 IM in 2:12.26, which is the 8th-ranked time in the world this year and the best by an American. Despite the lofty ranking – some temperance would serve well. She usually swims about this speed (or better) this early in the season. We should get a better feel for her if she enters the Indianapolis Grand Prix at the end of this month (that’s as of yet unconfirmed – though Charlotte would be a good bet based on geography). This was her only swim of the meet, so it truly seemed as just a quick test for her.

There were a ton of other names in this meet as well. The Gator Swim Club postgrads did what we’ve seen from a lot of the college-campus post-grad groups around the country this weekend and gone to race while their coaches are occupied by the NCAA Championships. As is per their usual, they were nowhere near a rest for this meet (if they did less than 50,000 meters in that week before the meet started, I’d be shocked).

The Gator post-grads took the top 4 spots in the men’s 200 free on the first day of the meet, led by strong 1:49.09 from Ryan Lochte and Conor Dwyer in 2nd in 1:49.17. That’s a really good swim for Dwyer, and he’s looking a lot better for the Olympics after that swim. In an interesting development, Dwyer and Peter Vanderkaay (3rd in this race in a 1:51) have both now been listed as “Unattached Gator Swim Club.” Coach Gregg Troy has historically allowed his swimmers to maintain affiliation with their hometown clubs to develop good national relationships, but in the Olympic year it looks like he’s consolidating under the Gator Swim Club banner. (Lochte is still listed as a part of the Daytona Beach team, where his dad is the coach, and I wouldn’t expect that to change).

Lochte outdueled another teammate, Sebastien Rousseau, in the 100 fly 54.12-54.17; but he also lost a very tight race in the 100 backstroke against Arkady Vyatchanin. Vyatchanin took that 100 back 54.79-54.89. Also in that 100 back, it looks like the Gator Swim Club has added another face to their post-grad group: former Indiana star Ben Hesen. The 26-year old is a former NCAA Champion in the 100 back, and also a former American Record holder in the 50 back. He has actually been competing since graduating from Indiana (though he’s new to Gainesville). He took 3rd here in 56.05.

Both Brett and Shaune Fraser, former Gators representing the Cayman Islands internationally, are very good freestylers. Shaune was arguably the better collegian, but the younger Brett has really taken off in the last year, and thus far has been bettering his brother in the long course pool. That held up again in this meet, as Brett won the 100 free in 50.26, with Shaune 2nd in 50.41.

14-year old Becca Mann of the Clearwater Aquatic Team, who is an 11-12 National Age Group Record holder, but in this meet she made a huge leap forward. Like we’ve seen with a lot of the crop of great young women’s distance swimmers (Gillian Ryan, for example), she’s really starting to add some speed. She won the women’s 400 free in 4:10.72 (a 5-second victory over Cal commit Lauren Driscoll) is her best time by five seconds. But she hasn’t sacrificed her endurance – she also won the 800 in 8:33.39 (a 19-second victory), which puts her among the top-15 in the world this year. Add on her 16:16.82 in the 800 free, and she was within 3-4 seconds of all three distance National Age Group Records, which is not a lot at this age. She’s got until the end of the summer to try and take those down.

While his teammates in Brazil were competing at the South American Championships, Felipe Lima stayed home and trained in Florida. He won the 100 breast in 1:01.35 to top Russia’s Roman Sludnov, who was the 2000 Olympic bronze medalist in the event. Sludnov finished 2nd in 1:01.56.

There were also a ton of impressive times by young swimmers, including:

A 4:51.74 from Bolles 16-year old Ashley Neidigh to place 2nd in the 400 IM. Her older sister Lauren swims for Florida.
A 22.65 from Bradl Tandy in the 50 free – Tandy broke three Junior College Records at the JuCo National Championship meet just a week ago for Indian River State College, including a 19.0 in the 50 free. He’s going to be the biggest Junior College piece that’s in years for whichever D-I program picks him up.