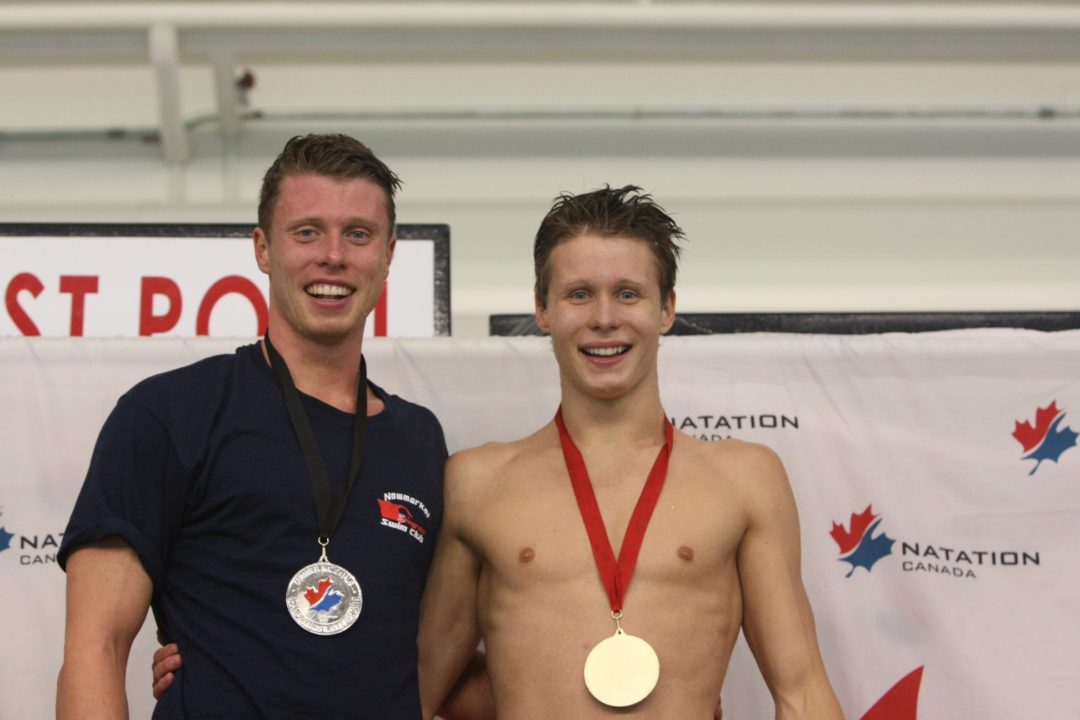 Day two of the Speedo Eastern Canadian Championships commenced today with a meet record being broken early in the prelims session; the young Canadian swimmers continued their domination of the meet in the finals, which gave way to some new meet records as well.

Fourteen year old Danika Huizinga backed up her strong multi-medal performance from last night with her second gold of the meet, this time in the 15&under 100m freestyle. The Ajax swimmer swam a 56.35 to trump the field. Rachel Rode from the Windsor Essex Swim Team finished just behind her in 56.58. Caroline Lapierre-Lemire won the 16&over version of the event in 54.57, beating her closest competitor by over a second and a half. Lapierre-Lemire was just half a second away from Victoria Poon’s Eastern record of 54.07.

Javier Acevedo gave the Ajax Aquatic Club their second victory of the night with a big win in the 100m freestyle. Acevedo, 16, swam a 50.41 to absolutely obliterate Owen Dayley’s previous 100m freestyle record of 51.33. Acevedo won by over a full second. The top two 17&over swimmers were faster than Acevedo, but not by much. Adrian VanderHelm won the final in 50.06. The fastest swim of the night however came from B final winner Cameron Kidd who threw down a 49.91 to be the only swimmer to break the 50 second barrier tonight.

Etobicoke Swim Club’s Sofia Carnevale won the women’s 15&under 100m breaststroke tonight.  Carnevale’s time of 1:11.43 was just over a half second shy of the Eastern record. Last night Carnevale earned herself the silver in the 200m breaststroke final.

Genevieve Robertson won the 16&over 100m breaststroke final in 1:09.54. The win gives her the chance to sweep the breaststroke events. She’ll swim the 50 tomorrow, and is going into the prelim session as the top seed.

Danielle Hanus from the Newmarket Stingrays swam an incredible 400m IM to break the previous 15&under Eastern record in the event. Hanus’ time of 4:44.63 beat Marni Oldershaw’s record by approximately eight-tenths of a second. The win gave Hanus her second gold of the meet. Laura Massicotte won the 16&over version in 4:47.41, a time that would have placed second among the 15&under girls.

Osvald Nitski, winner of the 200m breaststroke last night, picked up another gold, this time in the 400m IM. Nitski swam a 4:24.50 en route to becoming the new record holder in the event. The previous record of 4:25.66 held by Oakville’s Mack Darragh was eradicated by Nitski due to his swift breaststroke and freestyle splits. Austin Smith picked up the gold in the 17&over category coming close to Olympian Keith Beavers’ Eastern record with a time of 4:18.04.

The women’s 15&under 50m backstroke final proved to be one of the tightest of the night, having the top three swimmers all finish under the previous meet record. The previous meet record was however, set during this morning’s prelims by Emma Ball with a time of 28.44. Ball didn’t hold back at all in finals and blasted the field with a 27.65. Danielle Hanus grabbed her second medal of the night with a 28.00 followed by Danika Huizinga who also picked up her second medal of the night in 28.19.

None of the 16&over girls would have even medalled in the 15&under race. Vanessa Charron won gold in 28.27, a time that would have placed fourth in the previous final.

The Etobicoke ladies stepped up to grab a big win in the 4x200m freestyle relay. The team swam a collective 8:19.08 to take down both Windsor and Oakville in the process.

The Elite men added another gold following their relay win last night with a win in the 4x200m freestyle relay. The team threw down an impressive 7:31.64 to beat second place Point-Claire Swim Club by over six full seconds.