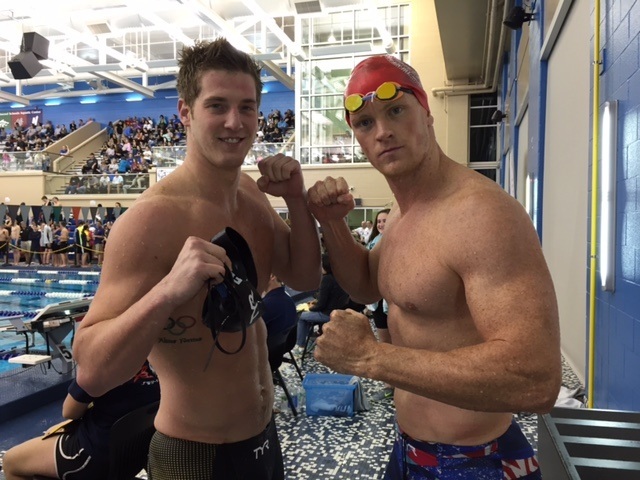 Both Madison Kennedy and Josh Schneider will take home the $1,200 purse for winning the 2015 AESC 50 Freestyle Shoot-out. Current photo via Josh Davis

The 50 freestyle shootout in Edmond Oklahoma City saw incredible performances on both the men’s and women’s side.

On the women’s side, Madison Kennedy threw down four sub-22 second 50 freestyles to win the shootout, finishing nearly two seconds ahead of anyone else. Her best time of the day was 21.68. That is her best time by .01 and the 19th fastest American performer in history.

The men’s shootout was much closer between the top four; Jimmy Feigen, Josh Schneider, Derek Toomey, and Michael Andrew. The four swimmers at 19.41 or better to advance to the semi-final round. The final came down to Josh Schneider and Jimmy Feigen. Schneider muscled through the final to win with a 19.03, finishing just ahead of Feigen’s 19.25.

Both Madison Kennedy and Josh Schneider will take home the $1,200 purse for winning the 2015 AESC 50 Freestyle Shoot-out.

During the semi-final round of the men’s shootout, 16 year old Michael Andrew posted the third fastest time in the semi-final of 19.24, breaking Ryan Hoffer‘s National Age Group record of 19.38.