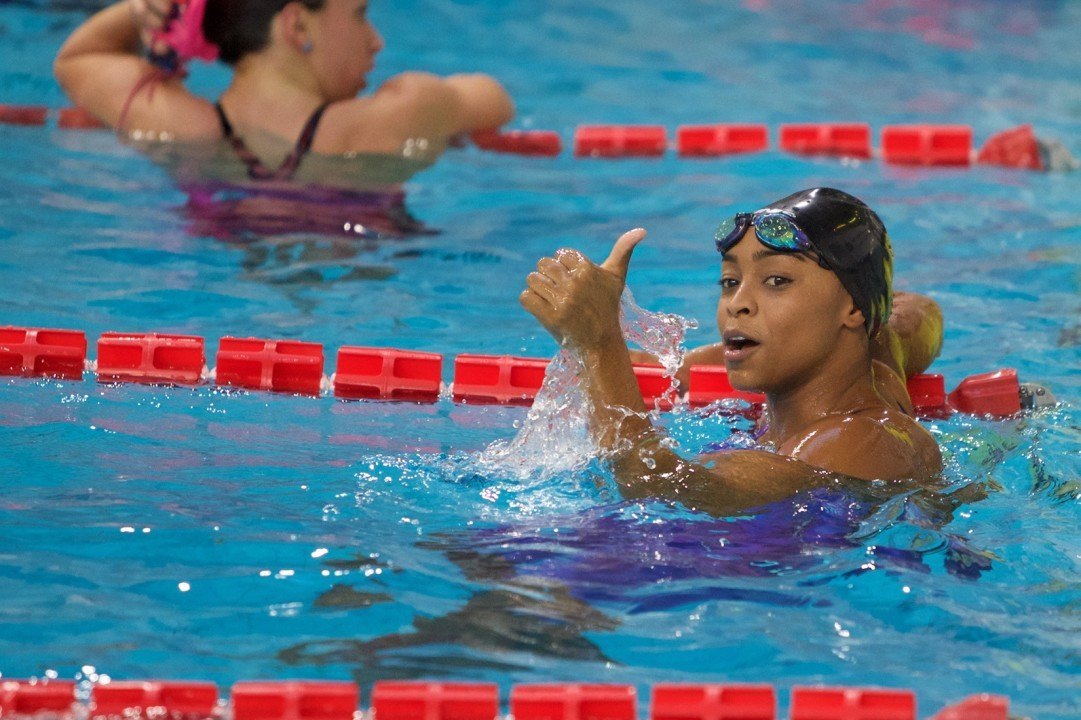 Arianna Vanderpool-Wallace was one of three meet record breakers at the Saturday finals session of the 2015 KMSC Pro-Am Classic. Current photo via Rafael Domeyko/Domeyko Photography

Day three at the King Marlin Pro-Am Classic saw three meet records, with one of them as the culmination of an exciting tournament-bracket style 50 free shootout that gave swim fans in Lewisville, Texas a show they won’t soon forget.  Prize money for this meet is awarded to professionals based on their “absolute finish” in the top three, meaning that amateurs who take podium positions decrease the number of cash awards given.  This makes the King Marlin meet a very interesting mix of seasoned professionals and top athletes from clubs around the country.  Each event can give $600 for a first place finish, $300 for second, and $100 for third, with prize money doubled for the 50 freestyle shoot-out and the 1650 freestyle.

Katie Meili is on a roll this weekend.  Her 1:54.15 for the 200 IM is her second record for the meet this weekend, improving upon the 1:54.43 she turned in last year at the Oklahoma Community College Pool.  That time is also a personal best for Meili, topping the 1:54.20 she turned in at Greensboro last December.  Karlee Bispo took the second place prize money with 1:57.84, with Springfield Aquatics’ Bailee Nunn taking the third podium spot at 2:00.54.  Fourth and fifth place were taken by two from Mission Viejo, with Jessica Epps touching at 2:02.15 and Samantha Shelton at 2:03.03.  Houston Swim Club’s Hannah Sumbera was sixth with 2:05.82 and Tri Aquatics’ Mallory Underwood followed with 2:06.62.

Amateur athletes filled the A-final of the men’s 200 IM, with Mission Viejo star Grant Shoults taking the event at 1:48.05.  Justin Wu, swimming unattached while home for Christmas from Harvard, took the second place spot on the podium with 1:50.56.  The third podium spot went to Mansfield Aquatic Club’s Michael Thibert at 1:50.83.  Felix Van Cauwelaert from Dallas Mustangs took fourth in 1:51.66 while Carlos Hunnicutt from TCU was close behind at 1:51.85.  Mission Viejo’s Daniel Kim (1:52.30,) JCKW’s Jacob Schultz (1:53.19,) and MVN’s Trent Pellini (2:01.54) rounded out the top eight.

An impressive field of women earned the chance to brawl in the bracket, and seemed to get faster every round:

When the dust settled from the quarter-final and semi-final rounds, the women left standing faced off in two final heats.  Samantha Shelton and Lauren Pitzer raced a nail-biter for the third and fourth place round, with Shelton sneaking her fingertip to the touchpad with a well-timed final stroke to steal the podium spot away by .02, touching at 22.87 to Pitzer’s 22.89.

The final heat featured Arianna Vanderpool-Wallace crushing her own meet record set in 2013, reducing it from 21.85 to 21.58, leaving Karlee Bispo with the second place prize money at 22.80.

The men’s 50 free was dominated by a field of professional athletes all wanting their chance to take advantage of the double bounty.

The final round saw Hornikel and Weber battling for the $200 prize for third place.  Hornikel managed to take the prize, and the podium spot, out-touching Weber 19.64 to 19.83.  The top prizes went to David Williams who blasted a 19.38 for second and Roland Schoeman who rocked a 19.19.

Overheard in the pro room, Schoeman was asked by Arianna Vanderpool-Wallace what he thinks about for his start, because anyone watching could tell that Schoeman clearly was the best off the blocks in the field for every round.  His reply…  “Rainbows and unicorns and stuff.”  Seriously, kids.  There is some advice for you from one of the best in the world.

Katie Meile again dominated the 200 breaststroke field, taking the top prize money with 2:08.88.  Behind her, Fort Worth Area’s Rayann Jaryszak (2:18.58,) and Mission Viejo’s Jessica Epps (2:19.04) claimed the second and third place podium positions.  Houston Swim Club’s Kylie Powers was fourth with 2:19.12, followed by Tri Aquatics Mallory Underwood at 2:20.96.  Houston had another A-finalist in the mix with Hannah Sumbera taking sixth place at 2:21.33, followed by Ashley Pales from Lincoln Select at 2:25.91.

Brendan McHugh got out like he meant business, splitting 53.43 for the first half of the 200 breast on the way to his second meet record of the weekend.  McHugh turned in 1:52.46 to take down the 1:53.04 mark set by BJ Johnson in 2013.  Taking the second place prize money was Eastern Michigan alum Ryan Fisher from Austin Swim Club at 1:58.16, followed by Lakeside’s Tristen Disibio at 2:01.81 for third.  Christopher Heye was fourth in 2:03.11.  Houston’s Davis Bryan was fifth at 2:04.36.  North Texas Nadadores’ Evan Kolde took sixth, followed by Lakeside’s Brendan Feehery at 2:05.72.  The Screaming Viking was back again as well, unable to match the preliminary performance that got him into the unlikely a-final because it was past his bedtime.  He finished in 2:07.67.

Schroeder YMCA’s Ashlyn Schoof broke away from the rest of the field, turning in 53.94 for the win in the women’s 100 back.  Behind her for second was Sefilina Maile from LOBO at 55.30.  Third on the podium was claimed by Lakeside’s Kara Eisenmann with 55.66.  Fort Worth Area’s Carla Gonzalez was fourth in 56.37, followed by Wichita NW YMCA’s Mia Gibson at 56.60.  Mollie Wright from City of Midland (57.80,) Clovis’ Stephanie Bartel (57.90,) and Wichita Swim Club’s Astrid Dirkzwager (58.49) rounded out the top eight.

Eugene Godsoe showed off his world-class underwater skills to win the men’s 100 back, taking it out in 21.78 and returning with 23.68 to distance himself from the pack at 45.46.  Drury alum Sean Feher added a little from the lifetime best 46.84 he turned in during the preliminary round, taking the second place prize money at 47.43.  The third spot on the podium went to DADS Club’s George Wozencraft, whose 50.12 just edged Thomas Heye from Little Rock Dolphins at 50.14.  King Marlin’s Kade Knoch was fifth in 50.56, also just out-touching MVN’s Daniel Kim at 50.58.  Lakeside’s Alvin Jiang (50.91,) and TCU’s Chris Hearl (51.05) were seventh and eighth.

Ashlyn Schoof, Gwendolyn Worlton, Hannah Saiz and Lindsey Bjornstad combined to bring Schroeder YMCA a convincing win for the 400 medley relay.  Their time of 3:44.79 was over five seconds ahead of the second place Mission Viejo Nadadores who touched at 3:50.01.  Houston Swim Club was third at 3:53.33.

The Texas Christian University squad of Chris Hearl, John Story, Garrett Hills, and John Smith turned in 3:19.84 to win the 400 medley relay by over five seconds.  Lakeside took second with 3:25.14, followed by Mission Viejo at 3:27.86.