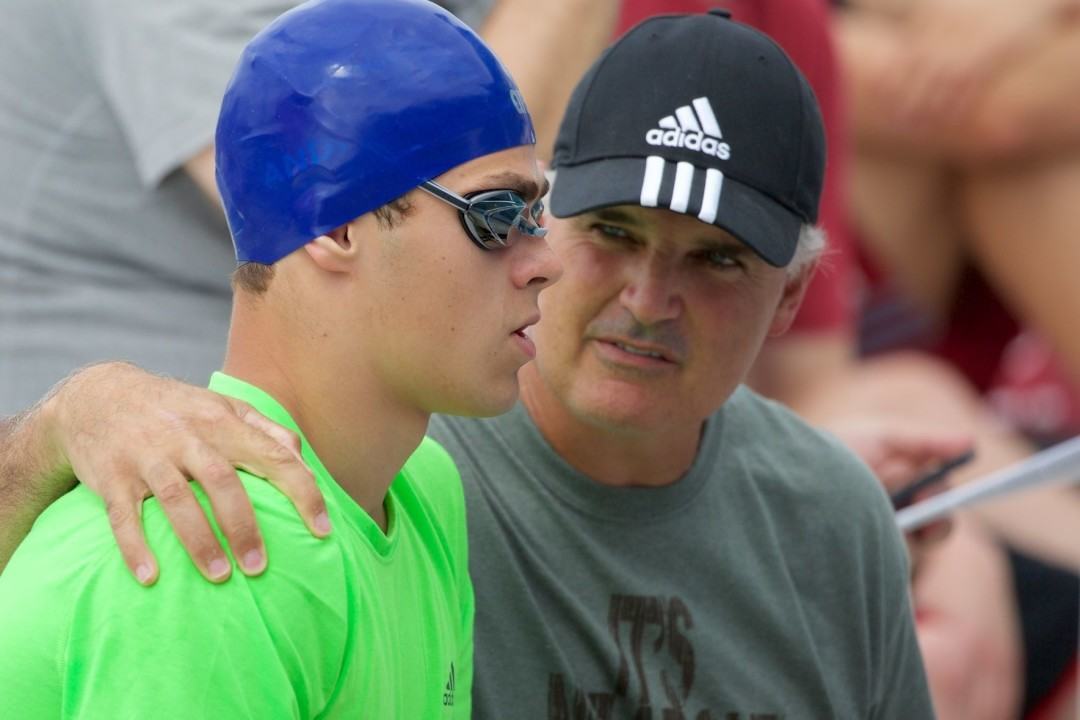 Michael Andrew, posing with his father and coach Peter Andrew, after becoming the fastest 16-year old ever in the 50 yard freestyle. Current photo via Josh Davis

After breaking the 15-16 National Age Group Record in the 100 yard breaststroke for the third time in a week on Friday, Michael Andrew of Indie Swimming has gotten another record at this weekend’s AESC Pro-Am in Oklahoma City: that of the 50 yard free.

Andrew swam a 19.24 on Saturday evening, which bettered the mark done last year by Ryan Hoffer of 19.38. Hoffer made headlines of his own in Austin last weekend when he obliterated the 17-18 National Age Group Record in the 100 yard free.

Andrew’s new 15-16 record ranks as the 3rd-fastest swim ever by any USA Swimming junior (18 & under) swimmer.

Andrew is faster at the same age than either Hoffer or Caeleb Dressel, who are currently the two fastest 17-18’s of all-time.

Andrew’s previous best time was a 19.76, done in March of 2014 at the NASA Junior National Cup in Florida.

Even faster than Hoffer who is himself a superstar.

too bad he will never be at NCAA’s…

Victor P, Hoffer is only a SCY superstar so far.

Don’t get me wrong. Hoffer and Andrew’s performances are great.
But let’s always put things in perspective.
MP was olympic finalist and world record holder at 15 and world champion at 16.
Ian Thorpe was world champion at 15 and world record holder at 16.
Daniel Gyurta was olympic medalist at 15.
Aaron Peirsol or Kosuke Hagino olympic medalists at 17.
And I could mention other people.
MA still has first to qualify for an A-Final at US long course nationals.
MA is doing great things in yards and at the junior level in long course.
He continues to develop month after month and it’s fun to watch.
But right… Read more »

Bobo – your perspective is wrong. Gyrta, Phelps, et al had zero success at the 50 m distance and marginal success in the 100 distance while MA’s age. MA isn’t trying/training for any 200 of stroke world records.

I hate the Phelps comparisons because they are different types of swimmers. Everyone knows that it’s more likely for a teen to excel on a world stage in longer events. The youngest swimmer to make the US Olympic team in an individual 100 event in modern times is Ian Crocker as an 18 year old in the 100 fly.

I don’t like when people bring up the fact that Phelps was a world record holder and world champion by the age of 16. Did you know that by 2001 standards, Michael Andrew would also be a World Champion? By the time MA turns 17 he may have times below the winning 01 world champs times in as many as… Read more »

Two observations to make about comparing MA to MP. First of all, not a fair comparison. There were several factors to attribute to some of that success. To set a WR today. The 200 fly WR was done in a partial polyurethane suit, if I’m not mistaken. I think the same suit the women’s 200 fly WR was set in (you know 2:01.81). So, 1:51.5 is significantly faster than 1:54.9, but rest assured I can see MA doing that in a couple years. The same can be said about the 200 free WR. 1:46 and change is a good distance away from 1:43 low (Agnel). Also, the competition is deeper.

However, I can with confidence say that MP was never… Read more »

(ps. this kid is a serious talent, just give him time)

I would bet good money that he will do both. He’s already been within .05 of the LC junior world record in the 50 Breast. I think he’ll crush it by spring. Also, he’ll be sub 60 in the 100 LC by spring. The kid makes best times practically several times a year and you know they’re going to be laser focused over the next 7 months.

We are witnessing the (near) future of swimming. Something special is happening here. I don’t want to put pressure on the kid but you can see where this is going.

You can’t add any more pressure…be sure of that. It’s fun watching him, but Katie has my “swim heart” all the way right now. She is my Hera and Zeus and Aphrodite and Ares all rolled up. 🙂 But this article, sadly, isn’t about her. LOL

What’s even more nuts is that he went 19.24 TWICE in the span of what, 45 minutes? Unclear who he raced through the rounds of the shootout, but it looks like he was beaten out by Josh Schneider (19.10) in the for a spot in the final.