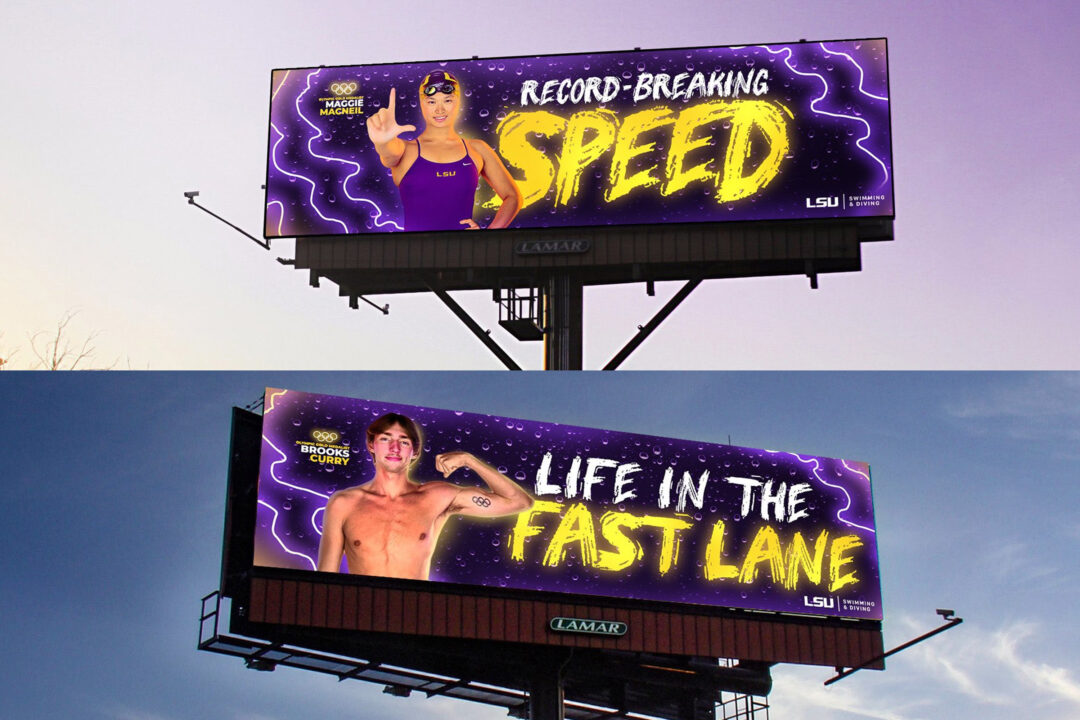 LSU hung up these billboards on the I-10 highway next to LSU's campus and on a road near Perkins Rowe, a popular shopping mall and social gathering location. Current photo via LSU Athletics

Billboards of Louisiana State University’s two biggest swim stars, NCAA champions Maggie MacNeil and Brooks Curry, are being put up around the city of Baton Rouge, according to a Twitter post from LSU Swimming and Diving. Baton Rouge, which holds a population of approximately 200,000 people, is the capital city of Louisiana and also where LSU’s campus is located.

These billboards are located in two locations: on the interstate-10 highway next to LSU’s campus and on a local road near Perkins Rowe, a popular shopping mall and social gathering location for Baton Rouge residents.

“The decision to create these billboards reflected our desire to promote our programs and student-athletes who epitomize excellence,” LSU told SwimSwam. “Maggie and Brooks are household names in the swimming community, and we want to enhance their brands within our broader fanbase.”

Be on the lookout 👀

In fact, LSU is one out of the three Division I programs to currently have individual NCAA swimming champions on both their men’s and women’s teams, with NC State (Katharine Berkoff and Kacper Stokowski) and Stanford (Taylor Ruck and Andrei Minakov) being the other two. Curry and MacNeil combine for four individual NCAA titles, which is more than Minakov and Ruck (two NCAA titles) and Stokowski and Berkoff’s (three NCAA titles) combined total, so they are certainly the best male-female swimming duo in the country when looking solely at NCAA success.

Due to their successes in the pool, Curry and MacNeil have single-handedly lifted the standing of their respective programs. LSU finished 15th overall at last year’s NCAA Men’s Championships largely due to Curry—who scored 53 points out of the team’s 85 total (the other 32 points were scored by now-graduated diver Juan Hernandez). The LSU women are seeing similar success after MacNeil’s arrival, as her 20.59 split on her team’s 200 free relay at the Art Adamson Invitational helped qualify an LSU’s women’s relay for the NCAA Championships for the first time since 2016.

Would’ve loved to see one named ‘Wicked’ and the other ‘Speed’. Then again, I am a marvel nerd.

Baton ROGUE is a much cooler name anyway

Dude, this is fucking dope

This is epic. The brooks curry billboard giving seeliger nightmares

Hope LSU paid these athletes for NIL! Isn’t this what NIL is all about?

Great way to promote the sport. More schools should be doing this. Can you imagine I75 outside of Gainesville with billboards of Caleb Dressel, Katy Ledecky, Bobby Finke, and Kieran Smith.

By my count, they also have 2 of the 4 Olympic Gold medals currently swimming in the NCAA. Jacoby and Hafnaoui (if he even counts this year) have the other 2.