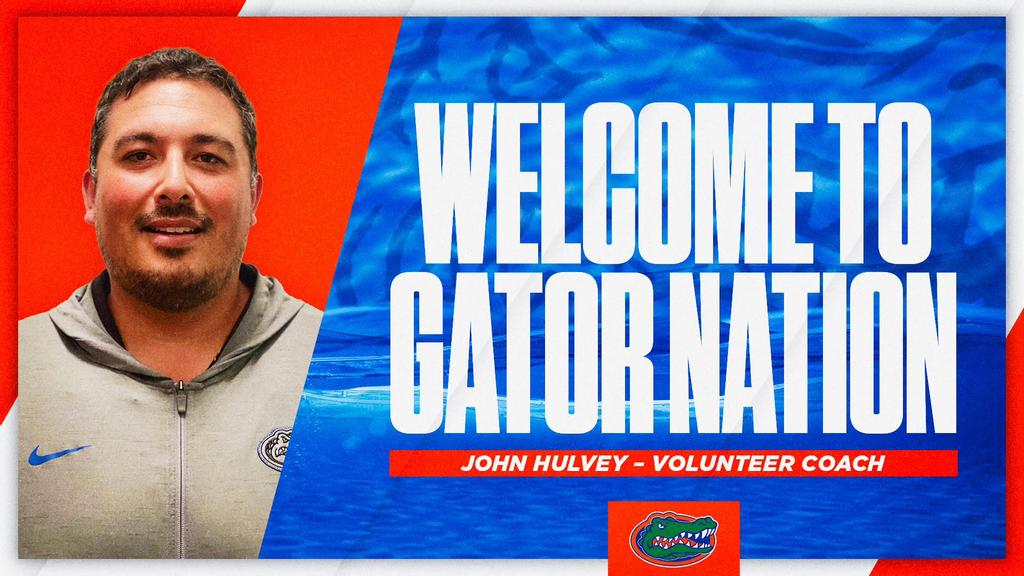 Hulvey, a UF alum, joins the Gators as a volunteer coach, marking the first addition to the team’s staff since the departure of associate head coach Steve Jungbluth in early October.

Hulvey is currently the head coach of Gator Swim Club (GSC), a position he’s held since June 2021, and is a 2006 graduate of the University of Florida.

“John has tremendous experience throughout many different levels of swimming,” Nesty said. “Paired with his local ties and dedication to the University of Florida, we’re excited for the impact he will have this season.”

A native of Gainesville, Hulvey has been coaching swimming for the past 15 years, including serving as the head coach of Loggerhead Aquatics, the Storm Swim Club and the Spartan Aquatic Club. He also served on the University of North Florida staff as a volunteer assistant.

Hulvey got his coaching start at Coral Gables High School in Miami, where he was the both the swim & dive and water polo coach immediately after graduating from UF.

“I’m excited to be a part of the Florida staff and to help the Gators excel into the 2023 championships!,” Hulvey said.

The Florida men’s and women’s teams are coming off strong showings at the UGA Fall Invite in mid-November and will return to collegiate action on Jan. 13 against FAU.

UF needs to try and snag Brett Arckey from Sarasota for the paid Assistant Coach position vacated by Jungbluth. SYS swimmers have been very successful at UF, Arckey is a UF alum who has done fantastic things at Sarasota, and Summer would likely follow him to train with him. Can you imagine having Ledecky, McIntosh, Weyant, and Sims in the same training group?

Really?!? You think the Head Coach and CEO of one of the strongest club teams in the nation will leave to become an Asst. Coach at UF?

He should stay put in Sarasota. It isn’t even close.

During the pandemic, a lot of people in more restrictive areas moved to SYS to train because they were open and operating. Are they still one of the strongest clubs in the nation with high school level and younger? Not a dig, just a question.

Potential hot-take: I don’t think that training with your competitors is for everyone. Sometimes an ultra-competitive environment will actually do more harm than good.

Edit: I understand that programs like Texas and Cal might say otherwise. But in reality, it is tough to compare college athletes and professional athletes.

Congratulations John! Extremely well deserved …one the bright minds in our sport today!

hope runs eternal when somebody is inked to a deal….

Do we know if Weyant is gonna be able to compete this year?

Congratulations, John! Great move by Nesty to bring a loyal Gator and excellent coach on board!

Gator Swim Club has quite a crew of excellent coaches! Very impressed…