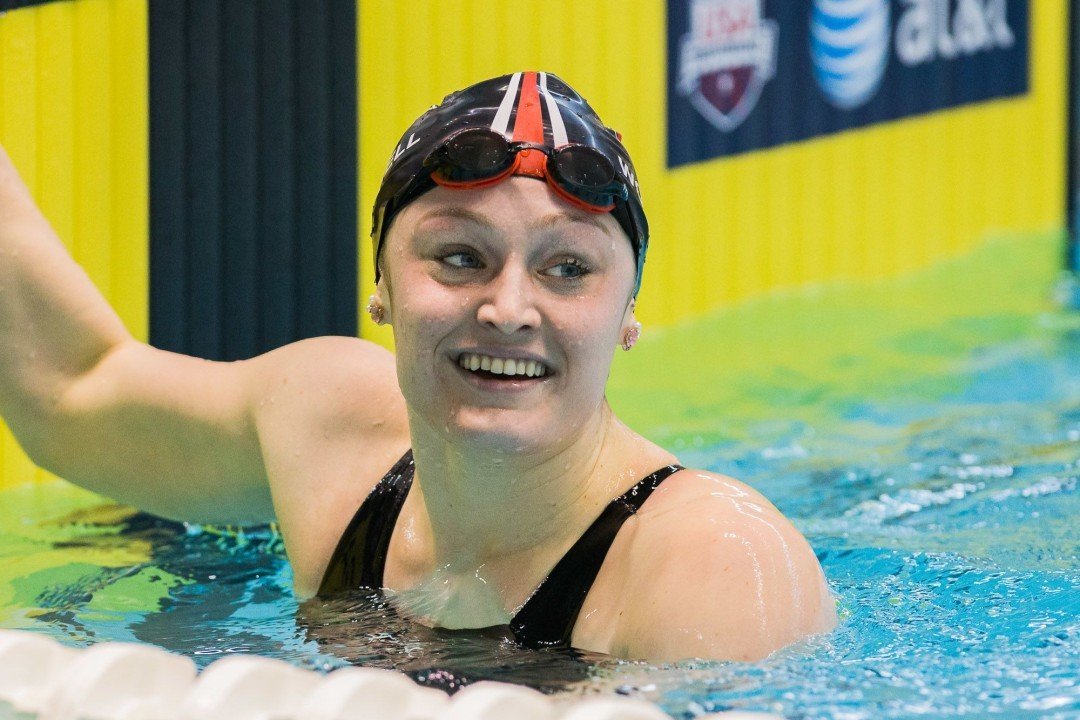 Louisville junior Kelsi Worrell swam one of the fastest 100 flys in history on Friday morning at the 2015 ACC Championships. Archive photo via Tim Binning/TheSwimPictures.com

Louisville junior Kelsi Worrell has swum the 5th-fastest 100 yard butterfly in the history of swimming, at any level, on Friday morning at the 2015 ACC Swimming & Diving Championships.

Her 50.38 ranks her as the third-best swimmer and as the fifth-fastest swim in history, behind only two of the heavyweights in history.

The new top 10 performances of all-time:

There’s some very interesting connections among these swims. The Georgia Tech pool, built for the 1996 Summer Olympic Games, still shows how incredibly fast it is as it approaches its 20th birthday. Now, among the top five swims of all-time, all but Coughlin’s 50.01 U.S. Open Record was done in the Atlanta pool.

Worrell is also chasing the times of Rachel Komisarz, who was named the new head coach at Ohio before this season, but had been an assistant at Louisville for Worrell’s freshmen and sophomore seasons when Worrell went from being a 54.5 butterflier out of high school to a 51.5 at the end of her freshman season.

Always has always will. That’s my cousin. And Taylor is swimming her butt off for the Gamecocks.

I coached Kelsey when she was an age group swimmer. I knew from the first time I saw her practice she would be great. She has a work ethic like I’ve never seen, never complained about a workout or not wanting to do something, and always had a smile on her face. She was one of the sweetest girls I had the pleasure of coaching. As far as her going that fast in prelims… That’s her style. She doesn’t hold back. She gives her all every swim. To Kelsey: Go get’em!!

Maybe even an American record? Sub 50?

You need to swim fast in the morning to get into finals. Swim too slow, you may not make the cut.

I think it’s great she went what looks like “all out” in prelims. It’s not as if she sprinted a 400 IM – it’s a 100 fly, with many hours to recover. Perhaps she felt great and didn’t know how fast she was going?

Thank you! After all these years, Bobo still doesn’t seem to understand that champion swimmers need to go fast. They’re used to swimming 10,000+ yards a day. They can recover in 5 hours from a hundred after putting the work in.

Why not go fast in prelims? Is giving 90-95% effort in prelims instead of going 100% really going to make a difference for your final swim–come on. Maybe she felt really good. Often times there is a lot less pressure during a prelim swim, and you swim faster because you’re more relaxed. 50.3 is moving regardless of how much effort she put forth or how fast she goes tonight.

Impressive performance.
But why she goes so fast in prelims?
Either she gave everything this morning and that’s weird or she still has something else in the tank and we can see a new NCAA record tonight.
Answer in few hours.
Anyway, that’s cool to see the overall women’s 100 fly level wake up this season in college. We now have a lot of girls able to swim under 51.

I agree with these sentiments! It’s a funny thing that two years ago 51.5 would have almost been the winning time.
It’s also strange to me that she would be fully tapered for this meet when she clearly has obvious potential to win this event at the big meet (and had already qualified)…unless she isn’t fully tapered and we’re going to see the first women’s 100 fly under 50 seconds!

She is not fully tapered or shaven