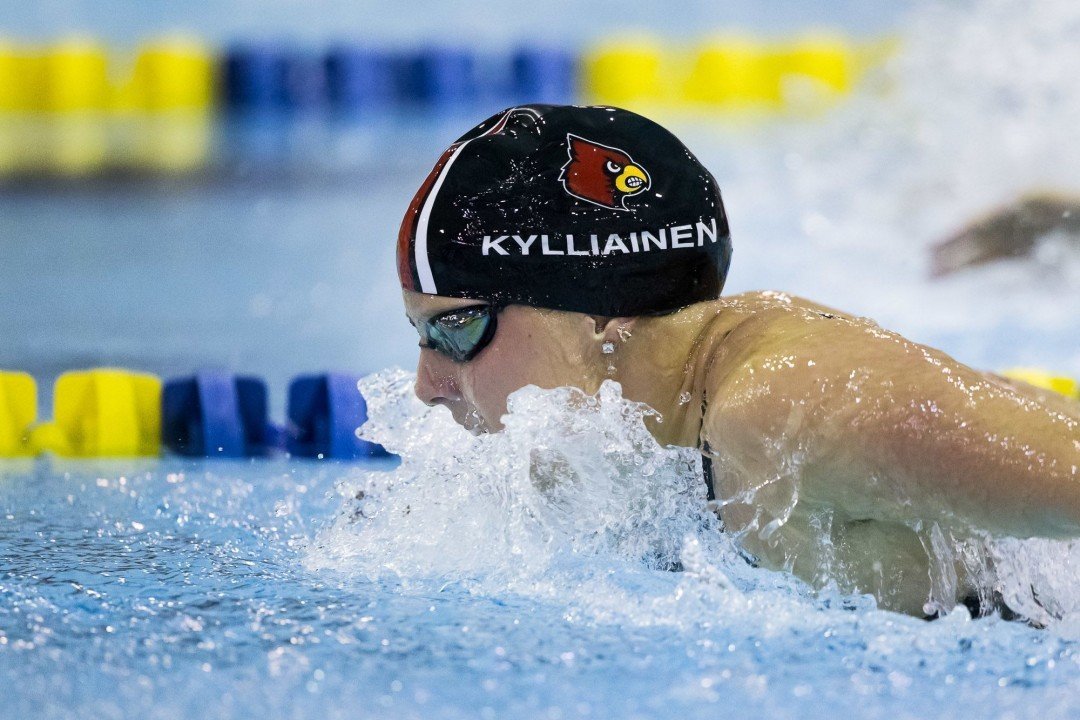 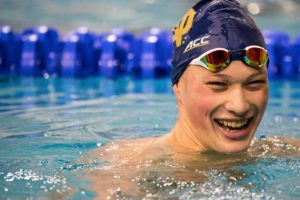 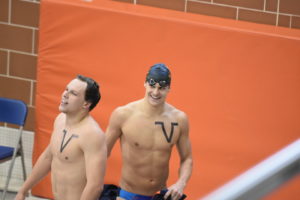 Virginia’s Justin Grender (right) was the standout swim of the time trial session on Wednesday at the ACC Men’s Swimming Championships.

The Louisville Cardinals, however, also are expected to have a very good day, especially early with the top seeds in the 400 IM (Tanja Kylliainen) and 100 fly (Kelsi Worrell). The Cardinals are in a tight battle with NC State for 3rd right now. With no diving event, there’s an outside shot that they could even start to creep up on 2nd-ranked North Carolina.

Louisville’s Tanja Kylliainen, with her NCAA berth effectively secured, Louisville senior Tanja Kylliainen worked her way into a top-seeded 4:09.29 in the women’s 400 IM, and will hold the center lane headed into Friday night’s finals.

The 2nd seed goes to North Carolina’s Emma Nunn, who made a big move to drop almost five seconds and secure a middle lane for the final in 4:10.72.

As compared to seeds, this was a good start to the day for the Tar Heels. They earned two swims in the A-final to just one for Virginia, despite the Cavaliers having three of the top five seeds. 3rd-seeded Shaun Casey slid to 16th in prelims.

Kelsi Worrell, who has been sharp all season long, swam a 50.38 on Friday morning to take the top seed in the women’s 100 fly – a time that breaks her own Louisville record and is the 5th-best performance ever recorded in yards.

She’s not the only one to have done so (A&M freshman Beryl Gastaldello did it at the SEC Championships), but that swim by Worrell is also faster than the time it took to win NCAA’s last season.

On either side of her in finals will be UNC’s Hellen Moffitt, who swam 51.98 in prelims, and Florida States’ Chelsea Britt, who was 52.17. It’s unlikely that anyone will challenge Worrell in finals so long as she holds serve, but with Ellen Williamson (52.21), Maggie Gruber (52.63), and Leah Goldman (52.82) all going sub-53, the race for 2nd should be exciting and competitive.

That swim for Moffitt is a new North Carolina school record in the event.

Virginia’s Leah Smith, with a 500 free title already under her belt from this meet, has taken the top seed in the 200 free with a 1:44.63 in prelims. This race should be more competitive than the longer ones are/will be, with Florida State’s Kaitlyn Dressel (1:45.15) and UNC’s Danielle Siverling (1:45.53) both swimming season bests for the 2nd and 3rd seeds.

While NC State still isn’t deep enough to take the team title, they’ve been swimming as well as anyone this week, including Rachel Muller, who dropped three seconds to move up into 5th in the 200 free prelims with a 1:45.89: a three-second improvement.

Ally Hardesty gave UNC a second A-finalist with a 5th-qualifying 1:46.08, which Hanne Borgersen would also do for the Virginia women in 1:46.35 as the 8th seed.

In between them was a tie for 6th-fastest times in the heat, with Andrea Kneppers and Jessica Hespeler swimming equal 1:46.09’s.

Notre Dame senior Emma Reaney, chasing her own Meet Record from last year, is already sub-59 in prelims with a 58.87. That’s about two-tenths faster than she was last season.

Louisville’s Andrea Cotrell (59.49) and Virginia’s Laura Simon (59.51) took the 2nd and 3rd seeds, respectively. Simon has also been under 59 in her career, and was the runner-up last season.

Virginia Tech put two into the A-Final with the 4th qualifier Mackenzie Stewart (1:00.52) and the 5th qualifier Weronika Paluszek (1:00.54).

Virginia’s Courtney Bartholomew will challenge the record for the all-time fastest 100 yard backstroke at NCAA’s, and while there’s little motivation for her to go full-bore after that time here, she was still well out in front of the field in prelims with a 51.21.

UNC’s Hellen Moffitt will once again be locked in a battle for 2nd, as she swam a 52.16 in prelims to break another North Carolina School Record: her second of the day.

That fight will be primarily with NC State’s Alexia Zevnik (52.18), the 3rd qualifier.

UNC’s Megan Bestor once again gives the Tar Heels two swimmers into the A-Final, qualifying 8th in 53.21. That finish was a potentially-big point swing, as she out-touched Virginia’s Emily Dicus (53.25) for the last spot in the championship heat.

very impressive time – she could be going for the American record tonight – would be great to have an American record broken at the ACC meet again this year – (Reaney of ND did so last year in the 200 breast) – the ACC women’s meet is getting to a level where it rivals the SEC and PAC12 championships.

WahooSwimFan – I think you are stretching it a bit to say that the ACC is rivaling the SEC and PAC12 – One or two great swims or swimmers does not equal conferences with the depth of SEC or PAC12s. Lets just wait for the Big Dance to see how the ACC fares. The addition of ND and Louisville as well as the surge in NC State over the past 3 years has helped, but the ACC still has a long way to go.

I agree with you on the depth aspect and don’t want to nickle and dime you on the ‘one or two great swims’, but the ACC could realistically see 4 or 5 individual NCAA winners this year with Worrell, Bartholomew, Smith, and Reaney (x2), and American records by all (except Smith – she’d have to settle for the NCAA record because of some high schooler named Katie)

contacted GT aquatic staff for non-updating live results. They responded right back that they are working on the problem and should have it fixed within the hour.

Shaun Casey is not rested shaved or tapered