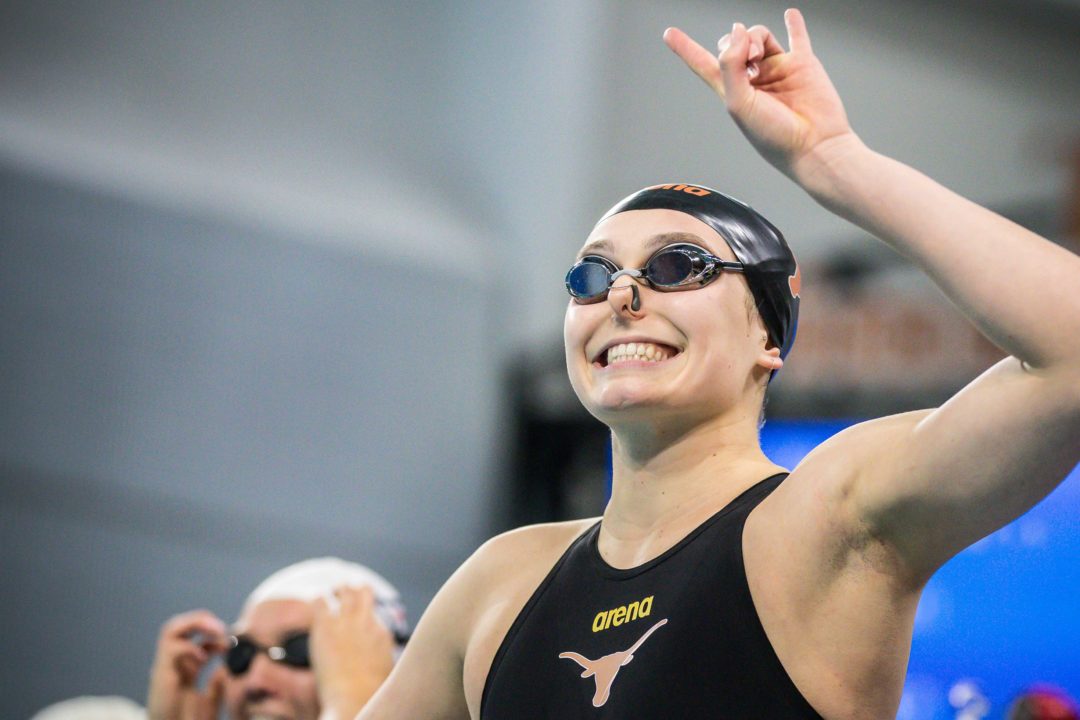 Texas senior Claire Adams was named Big 12 Women's Swimmer of the Year for the third straight time, matching the most in conference history. Archive photo via Jack Spitser/Spitser Photography

Representatives from the Texas men’s and women’s programs have swept the 2019-20 Big 12 Swimming and Diving Of the Year Awards, as voted on by the league’s head coaches.

For the Longhorn men it was their sixth consecutive sweep of the awards and 14th in program history, while the women accomplished the feat for the fourth straight year and fifth time in school history.

Daniel Krueger was named the Men’s Swimmer of the Year. The sophomore won 12 individual races this season, including a pair in the Big 12 Championship. His 41.26 time in the 100 freestyle in Morgantown, West Virginia was the top time nationally, making him the only swimmer from the Big 12 to hold a top time in any individual race when the season ended. Krueger also assisted Texas in four relay titles as he was named the Swimmer of the Meet at the Big 12 Championship.

Claire Adams earned Women’s Swimmer of the Year honors for the third consecutive year, matching the most in Big 12 history. She holds a pair of top-5 national times in the 100-yard backstroke (50.51) and the 50-yard backstroke (23.84). The senior finished her career with 23 Conference titles, including six this season as she was named the Swimmer of the Meet at the Big 12 Championship.

Jordan Windle tied the Big 12 record for most Diver of the Year honors as the junior secured his third title. He won 16 diving competitions throughout the season, including the platform (927.15), 3-meter (820.85) and the 1-meter (771.90) at the Zone D Championships. His 3-meter score (491.50) at the Big 12 Championship set a NCAA record as he was crowned the Diver of the Meet. Windle will represent Team USA at the World Cup.

Alison Gibson was named the Diver of the Year for the second time in her career and first since 2017. She won nine events all season, competing in only the 1 and 3-meter. The senior took first on the 3-meter (687.15) and second on the 1-meter (603.85) at the Zone D Championships which served as the highest finish by a Big 12 diver. Gibson was also named the Co-Diver of the Meet at the Big 12 Championship.

After winning nine individual races, including a pair at the Big 12 Championship, Caspar Corbeau earned Men’s Newcomer of the Year honors. The freshman holds the Conference’s top time this season in the 100-yard breaststroke (51.46) and the 200-yard breaststroke (1:52.06).

Kelly Pash was named the Women’s Newcomer of the Year following a freshman campaign that featured four national top-25 times. She took first in every dual race she competed in and also won the 200-yard butterfly at the Minnesota Invite (1:54.41). Pash’s outstanding performance at the Big 12 Championship included six titles as she was named the Newcomer of the Meet.

For the 18th-time in his career Eddie Reese has been named the Men’s Swimming Coach of the Year. The 42nd-year head coach has won 41 consecutive conference titles, while this year alone he guided the Longhorns to an undefeated season and a No. 1 ranking in the CSCAA poll. A record setting 24 members of this year’s squad qualified for the NCAA Championship.

Carol Capitani was named the Women’s Swimming Coach of the Year for the sixth-time in her career. She guided the Longhorns to their eighth-straight Big 12 title as she was named the Coach of the Meet. Texas finished the season ranked No. 10 nationally.

Matt Scoggin swept the Diving Coach of the Year awards. His divers won a combined National Championship at the 2019 USA Diving Winter Championship, while 10 total qualified for the NCAA Championship. At the Big 12 Championship his competitors won three men’s titles and a pair on the women’s side.

Would’ve been shocked at any other outcome!!

typical post where if you’re not texas you get pushed under the rug!
WVU SHARED the diving coach of the meet

These are not “of the meet” awards, these are “of the year” awards.

Gee, they edged out West Virginia?