Longhorn Legacy Continues As Texas Snags 2nd, 3rd, and 5th In The 200 Freestyle 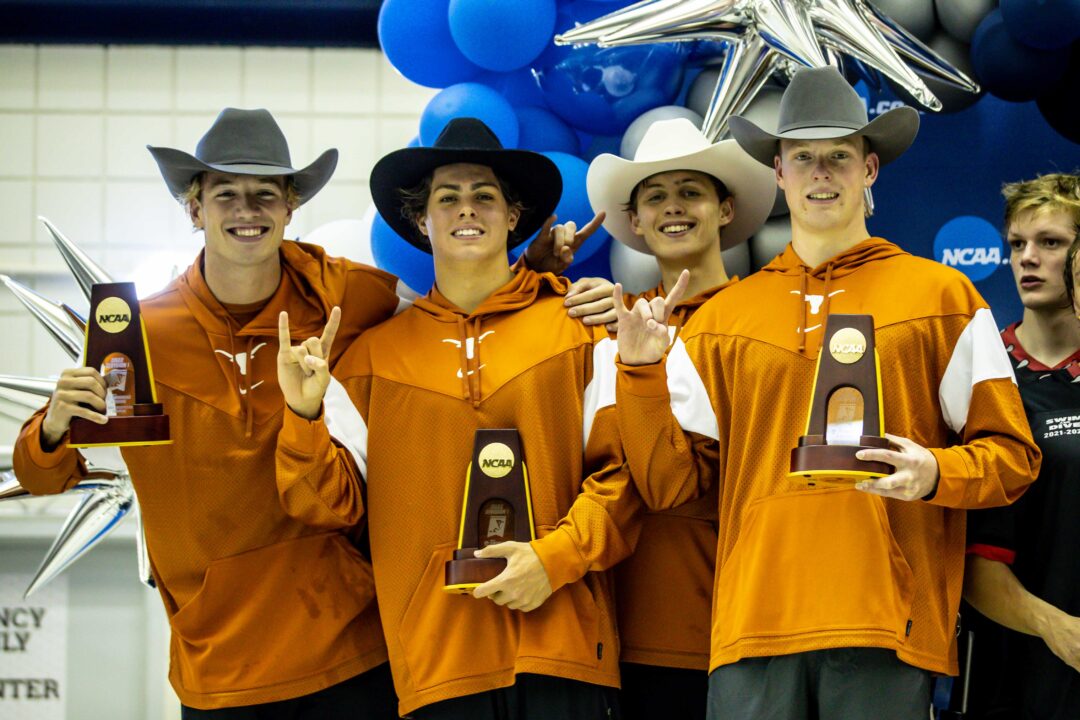 The Texas men remain dominant in the 200 freestyle as the Longhorns likely get 3 men onto the World's team in the 4x200. Archive photo via Jack Spitser/Spitser Photography

The Texas men came just shy of winning the NCAA title in 2022, but at World Championships Trials, they displayed their dominance by getting 3 men onto the team in the 4×200 freestyle relay. Texas’ NCAA Champion from earlier this year Drew Kibler was the quickest Longhorn in the final with a 1:45.32, closely followed by Carson Foster who swam a 1:45.66 for third place.

While Carroza’s 5th place finish doesn’t guarantee him a spot on the team yet, it’s likely that his placement will be good enough to get him into the relay in Budapest. That means that if it works out that all 6 top finishers get selected for the team, the Texas men will occupy 3/6 spots in the event.

Kibler, Foster, and Carroza were joined in the top 6 by victor Kieran Smith (1:45.25), 4th place finisher Trenton Julian (1:46.69), and 6th place finisher Trey Freeman (1:46.93). The top 6 looks pretty different from the squad that the USA sent to Tokyo wherein Kibler and Smith swam the 4×200 relay along with Zach Apple and Townley Haas in the final and Andrew Seliskar, Patrick Callan, and Blake Pieroni raced in the prelims.

So while this will be a changing of the guard in terms of the USA’s leading pack of 200 freestylers, the Texas dominance is nothing new for the Texas men. In addition to Kibler’s presence on the Tokyo, Townley Haas raced individually in the event and placed 12th in a 1:46.07.

Texas has a long history of getting men onto Olympic and World Championships teams in the individual 200 freestyle and 4×200 relay including Kibler, Haas, Jack Conger, Ricky Berens, Michael Klueh, Dave Walters, Clark Smith, and many more. In fact, Texas has put men onto the Olympic team in the 4×200 freestyle relay at every Games since 1988 (and many times before that):

Note: Gary Hall Jr. only swam at Texas for one season, and didn’t compete for any other NCAA team.

Note: Thanks to Robert Gibbs for putting together this chart

Foster, Carroza, Kibler, and Hobson won NCAA gold in the 4×200 freestyle relay earlier this year at NCAAs and have all made the transition to long course to wind up in the top 8 at this meet. When Townley Haas retired after his 2021 Olympic bid, the eternal question was raised if Eddie Reese and his Texas men would continue to uphold the 200 freestyle legacy in the long course pool. With 4/8 men in the final and 3/6 men onto the World Championships team, it seems like the legacy is safe for now.

I will say, the drop off from #3 to #4 only increases the chance that Dressel swims this in finals in Budapest

Jake was so close in the 2 breast. That was likely his best shot to make the team though he still has a few unlikely chances in other events like the 2 IM, 4 IM, and 1 breast.

He has the skills for a great 4 IM. Maybe not this year, but could see the Fosters going 1-2 in this event for the US after the Georgia duo moves on

I know their secret:

Lovely article!
The Longhorns will, indeed, be well represented in Budapest — and I expect some really fast times!

And the Foster legacy of choking in big meets also continues

He’s making the team in the 4×2 relay. Choke? Must be salty about something…

Couch critics have saltwater in their veins. 🧂 🌊

He made the team and added 0.09 in a final. How is that choking?

Him being 1:45 mid is great for the relay prospects

“In a world where you can be anything, be kind.”

He swam the two fastest times in his career. WTF are you talking about

You must be fun at parties

He didn’t choke, two guys were just better. Smith has been 1:44 and Kibler was better than him in yards too

Did you know Eddie Reese is the best coach ever?

Is this even up for debate anymore?