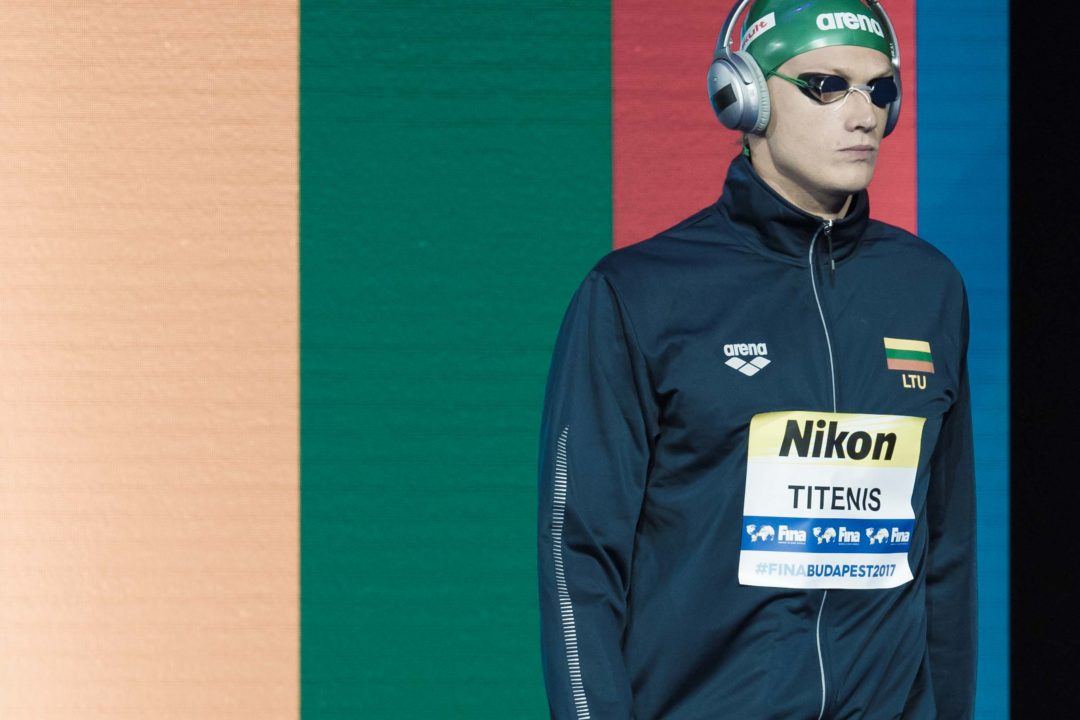 While the name of the athlete who tested positive has not been revealed, only one member of the Lithuanian swim team fits the description given by officials. Archive photo via Mike Lewis/Ola Vista Photography

A Lithuanian swimmer had a COVID-19 scare upon arrival in Tokyo last week ahead of the Tokyo Olympic Games, initially testing positive for the virus that has spun the world into a pandemic over the last 18 months. Multiple follow-up tests, however, came back negative, leading to the conclusion of a false positive on the first test.

An initial PCR test on July 9 came back positive, but a second test came up negative. After a third test on Saturday, he was determined to be negative.

This is due to be the 31-year old Titenis’ 4th Olympic Games. In 2012, he finished 8th in the 100 breaststroke, he became the second Lithuanian swimmer ever to reach an Olympic final after Vytautas Janušaitis did so in 2004.

The Lithuanian team will include 6 athletes: 5 men and 1 woman. The country has qualified to swim the men’s 400 medley relay, and their best medal hope is Danas Rapsys, who is the #1 seed in the 200 free and #4 seed in the 400 free,

While no swimmers have been announced as confirmed positive cases of COVID-19 yet, more Olympic athletes from other sports have tested positive as of Wednesday night in Japan.

Skateboarding is making its Olympic debut in Tokyo this summer. Jacobs was the European Championships silver medalist in the women’s street event in 2018.

She becomes the first athlete to break the news of her own positive test at the Games.

The Czech team has been hit by its 4th positive test after table tennis player Pavel Širuček tested positive and will not be able to compete. Beach volleyball player Ondřej Perušič tested positive earlier this week along with two staff members. Multiple other members of the team who have come into contact with those individuals are awaiting results of re-tests.

Neither Czech athlete was expected to contend for medals.

For what?? Russian after all.

In another news, Borodin of Russia tests positive for Covid and will miss OG.

We’re they all in the village?

The US gymnastics team moved out of the village to a hotel. I wonder if USA swimming will follow their lead.

What a daily drama we’re gonna have.
Stop the testing. At least we’ll have no positive tests. 😛

You just hit a new low

Stop shaming other sports at the Olympic level please

Better than tug of war (a previous olympic event)

“he became the second Lithuanian swimmer ever to reach an Olympic final after Vytautas Janušaitis did so in 2004.”

Well the men’s 100 breast finals in London were before the women, so technically he is the 2nd, and Meilutyte was the 3rd

Both made finals in 2012, so the question who was second was who qualified for their respective final first. Don’t know. A schedule question really.

Skateboard as an olympic sport is a joke