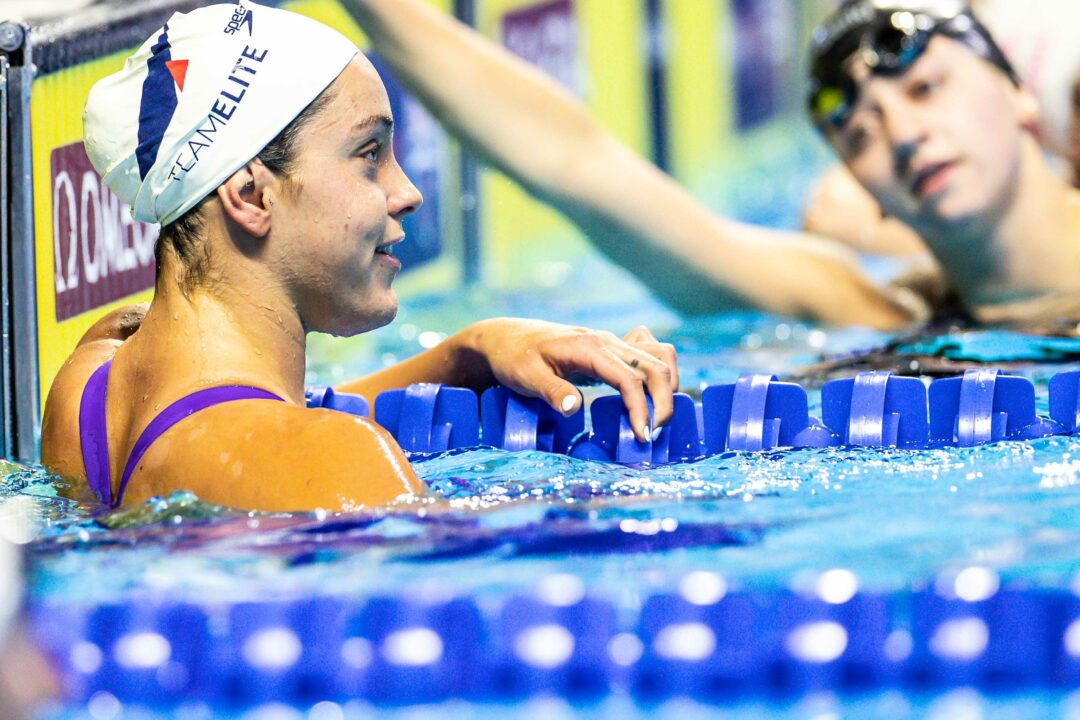 After competing at the U.S. Olympic Trials last week, Team Elite's Linnea Mack is back in the water. She came within .07 of her lifetime best 100 free time. Archive photo via Jack Spitser/Spitser Photography

The annual Fran Crippen Swim Meet of Champions started off with a distance session on Thursday in Mission Viejo, California.

16-year-old Mattea Sokolow of Team Santa Monica won the women’s 1500 free with a time of 17:13.23, out touching Ayumi Macias Alba from Jim Click Team Elite by .45. Sokolow was about 9 seconds off her lifetime best, while 3rd place finisher Sydney Willson of Mission Viejo finished in 3rd place with a lifetime best time of 17:25.24. 14-year-old Willson took about 2 seconds off her previous best from May.

Angel Martinez of Aggie Swim Club posted the top time in the men’s 200 fly this morning: 1:58.34, coming within half a second of his lifetime best time from the Pro Swim Series in May.

Team Elite’s Linnea Mack topped the women’s 100 free with a  53.85, coming within .07 of her lifetime best time from the May Pro Swim Series. She was followed by second place finisher seeds, Gator Swim Club’s Anicka Delgado (55.94). Mack made finals in this event at the U.S. Olympic Trials last week where she placed 8th; her fastest time came in the semifinals, though: 54.03.

Canyon’s Izabella Adame posted a best time in the 200 breast to snag second place in prelims with a time of 2:36.12, about .6 off her lifetime best time from 2018. She finished behind Trojan Aquatics’ Isabelle Odgers (2:34.14) who came within 6 seconds of her best time from May.

14-year-old Teagan O’Dell of Irvine Novaquatics out touched Team Rebel Aquatics’ Katsiaryna Afanasyeva in the 50 back to claim 1st place with a time of 29.22 and beat her seed time by 1.3 seconds. Cal’s Andy Xianyang Song won the men’s race (26.20), half a second ahead of Gator Swim Club’s Tomas Peribonio.

On the men’s side, Kushagra Rawat from the Swimming Federation of India swam the fastest prelims time of 3:57.37, right on his lifetime best from the May Pro Swim Series, followed by Palmira166-Mexico’s Ricardo Vargas Jacobo (3:59.67). Jacobo’s best time stands at 3:51.95 from a Pro Swim Series in 2016.

Mack would’ve made the team with that time 🤷🏾‍♂️ Missed taper or nerves I guess.

Linnea is a star. She was soo close and her times show it. Can’t wait to see how she does at ISL! Go Linnea! She is also a fantastic rep for the sport.

Morozov’s looking like a weak link on the Russian 400 free relay. I guess they’ll have to swim him in prelims to make sure he’s in-shape.

Can we mention Heidi George in the women’s mile taking 4th AT 45 YEARS OF AGE?

Can Sydney Willson catch up to her mother? 🙂