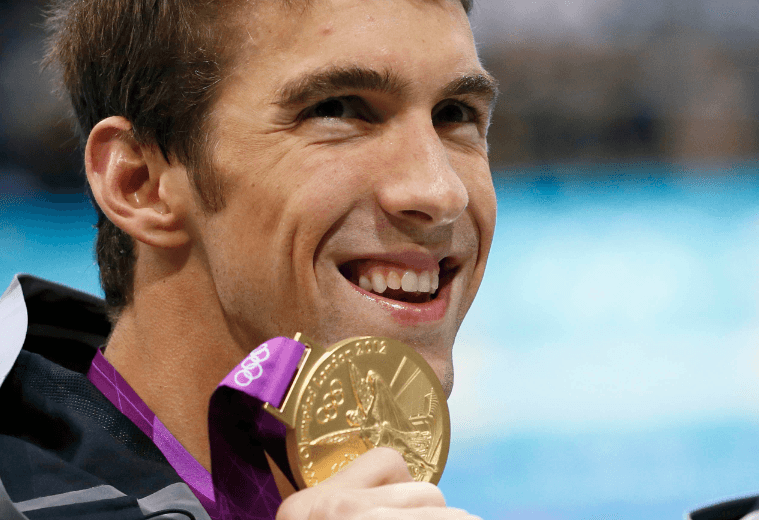 "Michael's path to greatness was sealed when he lost to Ian Thorpe and Pieter van den Hoogenband in Athens in the 200 freestyle. It proved Michael was fearless, unshakable." (Swim Photo Credit: VIS)

Life, and all things related to swimming

Michael Fred Phelps, born 1985 in Towson, Maryland, just north of Baltimore, was a live wire of childhood energy.  He grew up, by all accounts, a sweet kid doted on by three women, his two sisters, Whitney and Hilary, and his mother, Debbie. At the age of nine, Michael’s father and mother divorced. Michael attachments to these ladies grew even closer, stronger, a bond that has anchored him throughout his professional career and into his adult life.

Early on, inspired by his sisters’ success in the pool (Whitney was a world-class butterflyer) and 1996 Olympians, Tom Dolan and Tom Malchow, Michael’s worldview was focused through the lens of water.

Bob Bowman, a very young coach at the North Baltimore Aquatic Club, recognized Michael’s raw talent and had the vision to draw up a path to Olympic success, which he presented to Debbie. Michael’s mother was cautious, but had faith a measure of success would follow.

To be a fly on the wall during that moment, to witness the genesis of such great hope…the guarded recognition of greatness to come…did they really have an inkling of Michael’s extraordinary future?

2000 Olympic Games in Sydney, Michael’s the youngest male US Olympian in 68 years at the age of 15. His event: the 200 meters butterfly. He finishes just out of the medal-hunt, 5th, but with a 1:56.50 every swim-nerd on the planet suffers a swim-geek aneurysm, knowing the sun, moon and stars are begining to align.

2004 Olympic Games in Athens, Michael’s going for 8 gold medals — an audacious attempt to top Mark Spitz’s historic 7 Olympic golds in 1972 — bearing the brunt of Ian Thorpes’ candid analysis that it cannot be done. Aside from striving to beat the best in the world in each event, Phelps has to get past Thorpe in the 200 freestyle. He does not. He nets a bronze in the event, but that 200 freestyle may be the biggest turning point on his path to being the greatest of all-time. Michael stepped up and raced, showed that he feared no one, and, more importantly, that he did not fear losing.

Michael wins 8 for 8 gold medals, becaming the greatest Olympian of all-time. 6 of the 8 races are swum to beat the other great swimmers in each final. The 400 IM is strong, a breakaway win and world record, but it is the 200 freestyle, the race his lost to Thorpe in Athens, that inspires awe. Michael takes the lead from the first breakout and simply extends it over the next 189 meters, winning in 1:42.96. If asked, Michael has two races over his entire career that he’ll think about when he’s lying on his deathbed. “The 100 fly,” he explains, “because it was so damn close…and,” Michael pauses for a few seconds, seeing the race in his head, “…the 200 free. I’ve never felt that good before, that effortless. It was a perfect race for me.”

Michael’s turning point, his path to greatness, was sealed when he lost to Thorpe and Pieter van den Hoogenband in Athens in the 200 freestyle. It proved Michael was fearless, unshakable. At the 2012 London Olympics, Michael touches in 4th place on the first night of Olympic competition. It’s a great swim, a 4:09, but finishing out of the medal hunt would crush most athletes, no matter how great. Michael bounces back with a monster split on the 4×100 freestyle relay, a 47.15, and still Team USA nets silver after Lochte is run-down by France’s Agnel. Michael, in true Phelpsian fashion, builds his performance over his entire schedule, getting faster as the meet wears on, winning 7 medals, bringing his career total to 22, 18 of which are gold.

Michael, his mom Debbie, and sisters Whitney and Hilary

Debbie Phelps, for selflessly investing the time in her son (and daughters, Whitney and Hilary), for being the swim-mom that was always there, through those long tedious prelim sessions allover the US and the world.

Bob Bowman, for having the vision and faith that one kid could achieve the impossible, for being consistently firm but kind to his protege, for bringing the highest level of craft and professionalism to coaching.

We could also mention M Phelps 2004 Athens 4 by 200 free ( With Ryan Lochte , Klete Keller & Peter Vankerkaay ) that just took the gold in such an incredible fashion . The crowd was on the knees ; witnessing of the greatest relay ever in swim history .

Agreed, Jean-Michael…and that’s why we love comments, so everyone can weigh-in and share why or why not they agree.

Phelps as a youngster in that photo … he was just born to swim.

I’m loving the swammy awards! How about a 2013 prediction article?! I always love to see what I should look for and that could generate some good discussion. Thanks. And congrats to swimswam on a fantastic first year here in 2012.

Very good idea !!! what and who should we look for coming into 2013 in International swimming . Great Job SwimSwam , i learned a lot with u guys … Thumbs up for keeping so much work and make it so interesting .
2012 swammy for best swimming website award : SwimSwam

Don’t forget Phelps’ gift to fellow teammate Ian Crocker. He chose to swim the prelims only in the 4×100 medley relay… allowing teammate Crocker to swim in the finals. I so remember watching a young Phelps supporting his teammates from the sidelines during the race as the foursome went on to win the gold for TEAM USA. This was definitely one of the greatest acts of selflessness in the sport of swimming!