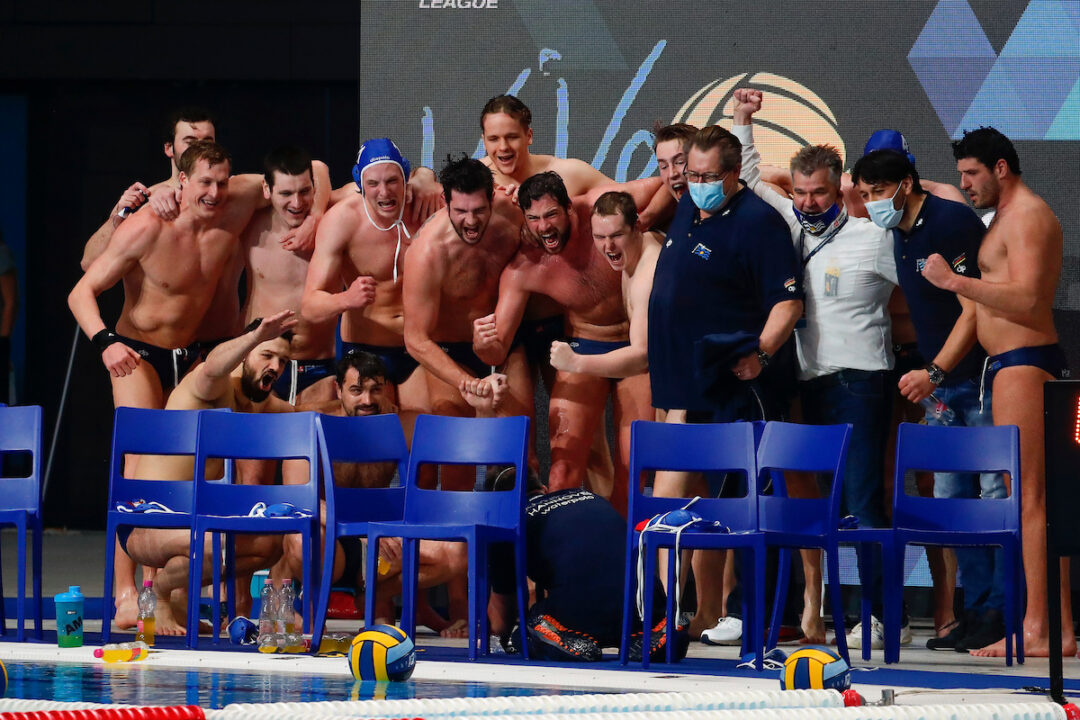 Hannover came back from 3-6 down to beat Dinamo Tbilisi 7-6 in the decisive match and joined the Final Eight field as the last one on board. Current photo via © A. Kovacs/Deepbluemedia/Insidefoto

The draw for the second qualification round has set up really exciting groups – all three days will offer premium entertainment.

Recco didn’t leave any room for doubt and after a perfect 5-0 storm in the third period the Italian side claimed a record-breaking 8th Super Cup title.

Three games, all decided by a single goal – Group B produced some real excitements in Budapest. Hannover came back from 3-6 down to beat Dinamo Tbilisi 7-6 in the decisive match and joined the Final Eight field as the last one on board. The Germans ‘gave back’ their guaranteed spot when they had to call off the hosting of the event, now they book their place in Belgrade on their own right. After Brescia unexpectedly fell to Jadran, the game of Barceloneta and Ferencvaros decided the top spot in Group B and the Hungarians prevailed at the end. In Group A Olympiacos clinched the third place after downing Marseille, while Jug restored some pride by forcing Recco into a great prestige battle but could not prevent the Italians from finishing with a perfect 10/10.

With the qualifiers having been determined before the last day in Group A, Round 10 had only question to answer: who would finish third. Olympiacos came out on top in the decisive match against Marseille – the French were overwhelmed by their success while the Greeks at least tasted some success in this last tournament after a draw with Jug and a loss to Recco. The big blow came towards the end of the third when Olympiacos scored twice in 1:42 minutes for 8-5 and added a 9th one early in the fourth to settle the bill.

Earlier the two eliminated sides Ortigia and Spandau played a fine match which ended up in a draw, while Jug tried its best to cast the previous 3-18 into shadow against Recco and the Croats now showed their true quality. It was a great battle which could have gone either way. Jug managed to take a 5-4 lead in the middle of the second but Recco bounced back with a 0-3 surge to go 5-7 up at halftime. The Croats had some problems in offence in this phase, could not score for 11:44 minutes, missed a couple of man-ups and a penalty in the third but at least they could neutralise Recco’s attacks too. Then in a sudden they found the way to the net and used that three times in 63 seconds for 8-7. Recco could halt its scoreless run after 7:44 minutes, still in the third so the last period began at 8-8.

After a quick exchange of goals the Italians could add two action goals in 49 seconds with a killed man-down in between and that was decisive. Jug could pull one back but Dusan Mandic hit one immediately from action for 10-12 with 3:22 left and Jug could score its following goal only 23 seconds from time.

Even more thrills were in the programme in Budapest. The first game was the ‘mini-final’ for the last qualifying spot between Dinamo Tbilisi and Hannover. The first half brought a low-scoring contest, defences worked well and the goalies were also tremendous, especially Moritz Schenkel who stood with 12 stops/13 shots (92.6%) towards the end of the second period – thus at the middle break nothing separated the two sides at 3-3.

A bit surprisingly, the Germans’ offence lacked the usual composure, not even their great Serbian and Montenegrin shooters were able to be on target – while Dinamo made most of its chances. Boris Vapenski’s fine 6m shot gave them the lead for the first time and soon they went 6-3 up as Giorgi Magrakvelidze scored one from action and another from a man-up. Hannover’s miseries were a bit eased by a 6 on 5 goal by Darko Brguljan (which ended a 6:54-minute long drought). A killed man-down in the last minute offered some hope for the Germans but they needed 4:16 minutes in the fourth to get one step closer when they could net a 6 on 5.

Before that they had already missed one while Dinamo had a golden chance but bad passes ruined their man-up too. It was crucial, it could have been 7-4, instead came 6-5, then another 6 on 5 for Hannover which Muslim converted with 1 second left on the shot-clock (it was his 4th in the game), so it stood 6-6 and there were 2:54 minutes to play. Dinamo’s next man-up was denied by a block, at this stage the Georgians seemed to have run out of gas. And 47 seconds from time Hannover had it: Ivan Nagaev scored from a 6 on 5 to complete the 4-0 run. Vapenski tried his luck from 6m but hit the post 35 seconds from time. They still regained the ball for the last 5 seconds, earned a man-up but Jovan Saric, who scored three in the first half, couldn’t beat Schenkel this time.

This loss ended the Georgians’ dreams of a historical first F8 appearance – remaining scoreless in the last 10:03 minutes cost them the match. The win sent Hannover ‘back’ to the Final Eight, a fine achievement from the team, which would have been there, provided the event had taken place in Hannover. Now they can travel to Belgrade on their own right – and face Recco in the quarters as a ‘bonus’.

Next came a stunner: Brescia, which had beaten Jadran 11-6 with ease in their previous encounter in March, went down against the Montenegrins this afternoon. The Italians never found their rhythm though at stages they didn’t seem to look for it. It stood 2-2 at halftime, then Jadran smelled the opportunity and gained a 5-3 lead, soon they moved on to go 6-3 up and even though Brescia had a kind of comeback, the Montenegrins netted a man-up for 7-5 and Brescia’s last reply came too late. Their disastrous shooting percentage (6 goals from 32 shots) prevented them from being part a possible three-way tie where they would have had a good chance for the first place.

Instead, this totally unexpected result set up a group final between Barceloneta and Ferencvaros. The Hungarians had the better opening, Denes Varga came up with two fine shots, while the defence worked well, Barceloneta could score only one centre goal in the first period. Man-ups were wasted in great numbers in the first half (the Spaniards were 0/4 at this phase, Ferencvaros 1/6), so it stood 2-4 after two periods.

Both sides improved somewhat its conversion in the third but the hosts were still more impressive in front and gained a 7-4 lead before the last break (en route Barceloneta faced two exclusions for faulty flying exchanges). The fourth began with two spirit-lifting shots from the Spaniards for 7-6, though they missed two man-ups too. That hit back with 3:10 to go when Ioannis Fountoulis netted an action goal from Varga’s brilliant assist for 8-6, his third goal in a row. Alvaro Granados pulled one back from another fine shot from the perimeter, so it stood 8-7 with 1:54 remaining. 58 seconds were on the clock when Barceloneta earned a man-up, called a time-out but a block denied them (finished with 2 for 10) and Ferencvaros played well with the time left and by defeating Barceloneta once again by a single goal, they are set to finish atop.