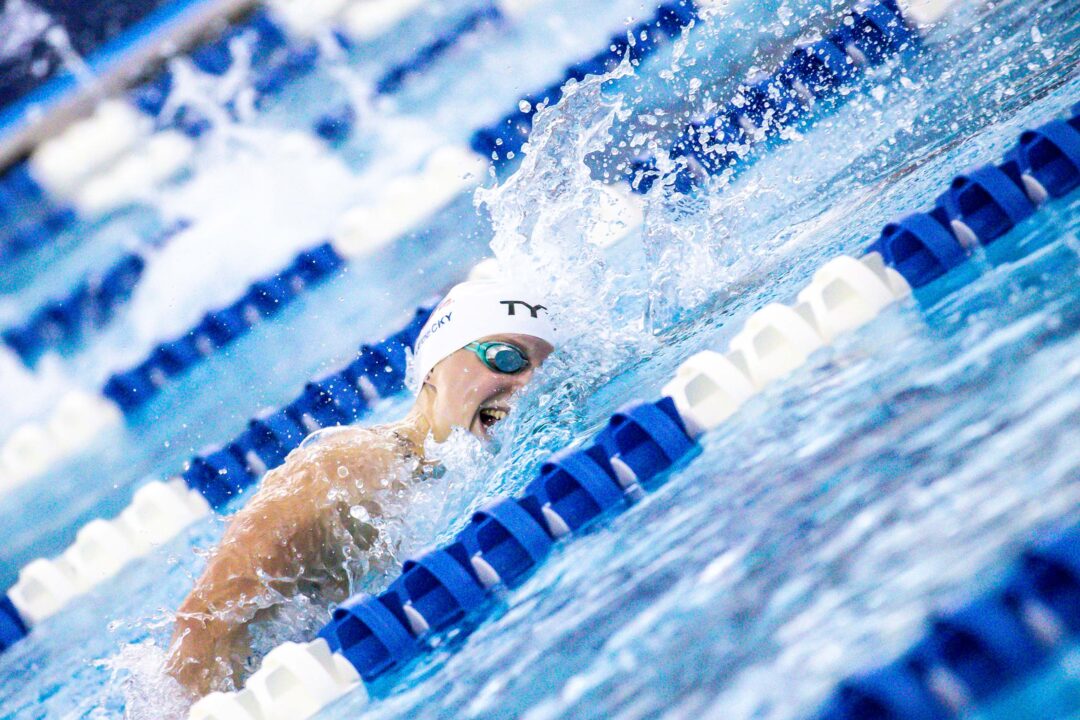 Katie Ledecky‘s performances in the last 24 hours have proven to us that, at least early on, her new training at the University of Florida is working.

The last time that Ledecky competed at the US Open was in 2019 when she was still training at Stanford. For comparison, Ledecky swam a 4:05.50 in the prelims before unleashing a 4:00.81 in the finals, which is still the current Championship Record.

If we’ve learned anything from this summer, we know that University of Florida swimmers know how to close a race. Double Olympic gold medalist Bobby Finke is historically known for running down several of the world’s best distance swimmers in the final 50 and putting up ridiculous splits. In Toyko, Finke ran down the likes of Florian Wellbrock, Mykhailo Romanchuk and Gregorio Paltrinieri to win gold in the men’s 800 and 1500 freestyle events.

There’s little doubt that Ledecky will be faster in tonight’s final. The real question is, how much faster?

She also showed a great back-half in last night’s 800, splitting a full second faster than she did at the Tokyo Games on the last 100 while putting up nearly the same overall time. If Ledecky is able to take out the race in dominant command as she typically does, while combining the back-end training she’s receiving in Gainesville, we could see a time that will leave us speechless.

Obviously I’m not privy to her plans / training cycle but wow would I – as a fan – tear up a bit to see her throw something better than this 4:01 tonight. She was actually real close this morning to her Trials-winning time over the summer

This lady is a legend!!!! Just amazing. Yes imo the GOAT in women’s swimming.

Interesting fact that if Ledecky swims faster than 3:59.82 tonight she will push out from the list of top 25 best performances the result of her first international race at 400FR when for the first time in the history (textile) a woman broke the 4 minutes barrier.
Wow, how much time has already passed since that bright achievement of 16 years old high school sophomore.

i love the start of this arc for katie lol

She’s trying to change her pacing so her rematch with Titmus will play out differently.

That last 50 by Titmus really was amazing. She kicked like crazy, pushing herself to her absolute limit. Probably heard echoes of Boxall’s voice in her head.

Come on USA Swimming. Let her swims with the guys tonight. Makes a way more interesting guys race and also a way better women’s race. Having her swim w the women is boring both ways.

Be creative. Why not do it tonight? So what if it doesn’t count.

Track does it in distance races, we could to.

I agree. I think it would be great for the sport to see her challenge the men. She’s gonna breeze through this women’s final.

This is just conjecture, but if Katie could have swum her final 100 in Tokyo, as fast as she did this morning, she would have beaten Titmus. I understand that there are a lot of factors, such as time differences, pressure, fatigue, how fast she had done her first 300 meters, and whatever else affects racing, but it’s still fun to play “what if?”

She went out much slower. That’s probably why her last 100 was a lot faster here than at the Olympics.