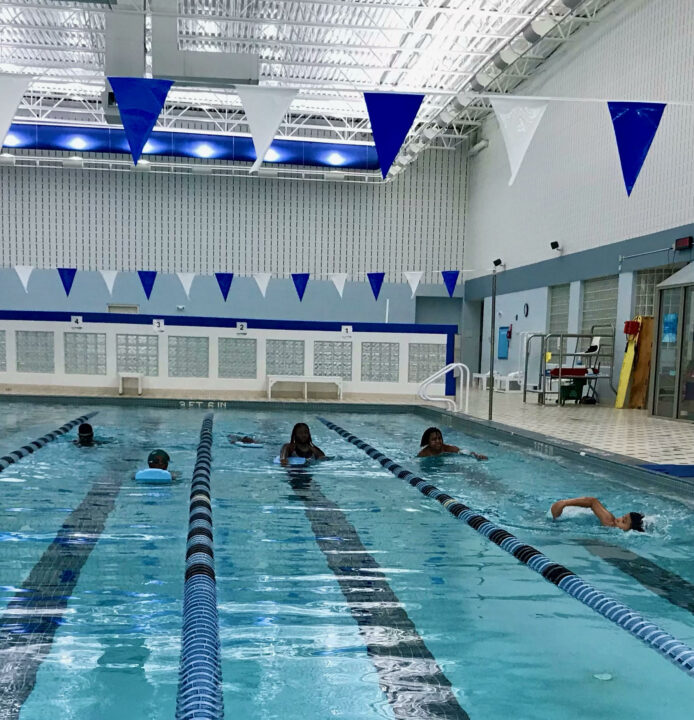 Back in fall of 2019, Mercy Health physician Dr. Stephen Wilson reached out to Miller to begin the program. The program was supposed to begin in March 2020, but was pushed back to March 2021, about a year later, due to COVID-19.

Local NBC Affiliate channel 5 aired a brief overview of the program. View that video below. Some special highlights are 11 year old Tia Harris’s experiences as she says she was nervous but enjoys learning to prevent her from drowning. 10 year old Trey Grover once had a scary experience where he almost drowned after water went up his nose, but now has become more comfortable in the water.

At this learn to swim program, the young children are able to learn to swim from former Xavier University swimmer and volunteer coach Tony Miller. Miller said that his favorite part of being a coach is when the kids begin “to build belief in themselves. Before you know it they are coming in early before practice and staying after to play”. He also said that he wants to “show the kids and adults that whatever you want to do, whether swimming or not, you can do it. Even if there aren’t many people that look like you doing it.”

There are numerous factors that contribute to the disproportion in fatal drownings. Some of the factors are lack of access to a swimming pool, desire to swim, and swimming ability. In addition, swimming lessons are not cheap as they can range from $50-100 a month. This financial expense is another significant barrier.

In 2017, the USA Swimming Foundation found that 79% of children in families with a household income less than $50,000 a year have no/little swimming ability. They also found that children who qualify for free or reduced lunch programs at school are 63% less likely to have good swimming ability.

It is important to make water safety training and education accessible to children in communities, especially for those at greater risk of drowning.

This is a great start. Too many pools are reducing access water safety programs, while drowning risks never subside. Just this week young teen drowned at Butler county theme park.