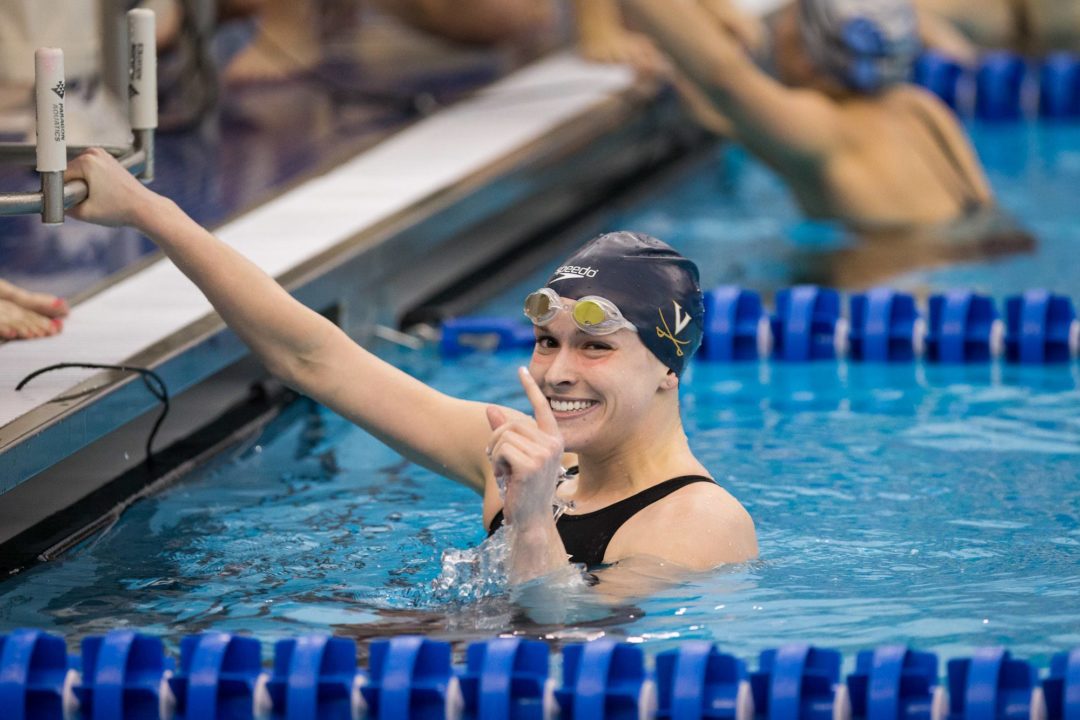 David Marsh and his SwimMAC Carolina program has begun rebuilding their professional training group headed toward the 2016 Olympics.

Yesterday, they got a commitment from two-time Olympic champion Kirsty Coventry of Zimbabwe, and today the club announced that 2012 U.S. Olympian Lauren Perdue will train in Charlotte for the 2016 Olympics.

“I have been ready to begin my professional swimming career since graduating from the University of Virginia this past May.  I am thrilled that I have been blessed with the opportunity to represent Team Elite in the beautiful city of Charlotte.  Coach David Marsh and Team Elite have helped many athletes achieve their highest goals, and it is my hope that this new phase of my life will help me grow both as an athlete and a business professional.  I am looking forward to experiencing everything Charlotte has to offer” states Perdue.

Perdue will be supporting her training through the sale of her artwork through the online retailer Etsy.

Perdue’s career has been up-and-down; when she began her collegiate career at Virginia, she looked like she was the next great thing in American freestyling, and was the ACC Championship Swimmer of the Year as a freshman. Then she ended up missing the end of her junior season during the 2011-2012 season with a severe back injury, only to make a stunning comeback and qualify for the 2012 Olympic Team in the 800 free relay that summer in one of the year’s great stories.

For her efforts as a prelims swimmer on that relay, she received an Olympic gold medal. Coming back to Virginia for her senior season in 2013, however, Perdue managed to score in only one individual final as a senior: 10th in the 200 yard freestyle.

Now, Perdue will head into the deep water of professional training, though it appears as though she’ll do so without much support from USA Swimming. She did not swim at the U.S. World Championship Trials, and won’t swim at the U.S. Open, meaning that she won’t renew her spot on the US National Team, or receive APA stipends, for the 2013-2014 season.
“It has been fun watching Lauren rise through the ranks as an age group swimmer from Greenville, NC then to watch her success in Charlottesville and now it will be even more fun to have her here in Charlotte,” SwimMAC CEO Marsh said. “Lauren was quick to discover and recognize the support for the sport swimming in the Charlotte community.  When our staff met with her to discuss next steps it was important to her to land in a community that would support her goal to win an individual medal as well as support her in gaining experience in the work force.”

Casey, no better words said. I am a parent of 4 swimmers coming through SwimMAC program and in the club since 1999. Cannot say enough about NC Swimming and seeing our athletes come back to train for Olympic level training in our state. Every club and all our coaches in North Carolina make me proud in the development of these athletes at all levels. We are thankful to have Coach Marsh and staff to be part of making North Carolina Swimming recognized at National and World levels but also the impact these Elite swimmers bring back to all our age group swimmers in our state to dream big. Welcome Lauren

We are really happy for Lauren as she pursues her Olympic dream once again. SwimMac offers a unique training environment with Coach Marsh and the rest of his staff along with other Olympic hopefuls.

Thank you for the props for GSC – but I have always felt it was a blessing to work with such a great athlete… I think as coaches we need to cherish those moments a little more and remember that during any performance we are just a small part of the overall outcome… The athlete, in the end, deserves most of the “credit”

More propaganda for mac to claim these athletes as products of their program to recruit swimmers from other teams in Charlotte and the North Carolina LSC. Don’t worry mac parents, your dues increase will help pay for these pros living expenses.

Wow, NC Swimming, you’re very poorly informed. Team Elite is separate from the rest of the team and supported by private donations and corporate sponsors. We’re lucky our kids get to train along side such great athletes from all over. There are few swimmers that are the product of one team, alone, and Coach Marsh has always recognized that.

Better yet mac parents, if you make a large enough donation to elite you can join the coaching staff, to coach your own kids. Awesome staff model.

She could probably pick up some money on the side working as a fitness model. If you look at the youtube comments for ‘Call Me Maybe’, a number of them were trying to figure out who the really pretty girl at certain points in the video was, and it was Lauren.