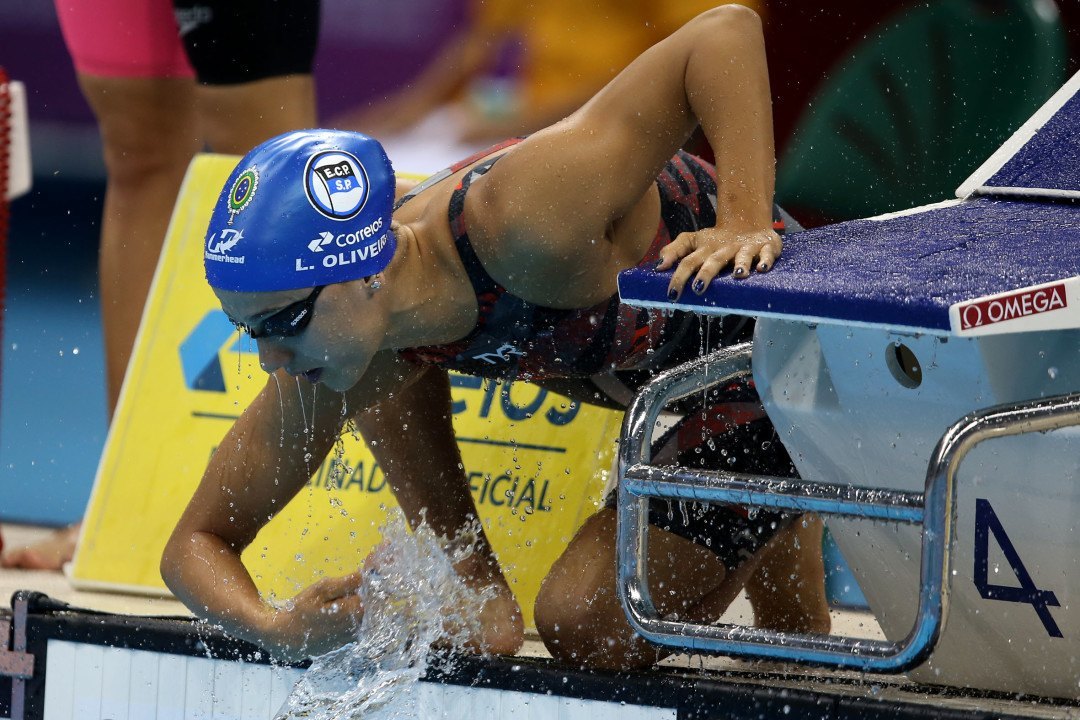 Larissa Oliveira has been discharged from the hospital and is recovering after her car accident earlier this month. However, doctors have not yet set a date for her return to the pool. Current photo via Satiro Sodre/SS Press

According to a report from Brazilian sports outlet Globo, Brazilian and South American record holder Larissa Oliveira is having difficulty walking after her car accident earlier this month and subsequent surgery, but she is optimistic about her recovery. Oliveira suffered a puncture in her right leg on March 8th when a tree fell on her car. She was released from the hospital over a week ago.

She tells Globo that she cannot yet walk without crutches, and doctors haven’t set a date for her return to the pool.

“I’m already home,” Oliveira told Globo, loosely translated. “I was discharged seven days ago. I’m still recovering here at home. I’m still at rest, I cannot exercise, I cannot support my foot, I walk with the help of crutches. But I’ve already started physical therapy. I’m optimistic, and the doctors are hopeful about my progress. I’m sad that I don’t yet have a date to return to the pool, but I know this phase will pass, and soon I’ll be back doing what I love the most, which is competing and training.”

Oliveira is the Brazilian and South American Record holder in the 100 free in both long course (54.03) and short course (52.75), with the long course record coming at the 2016 Olympic Trials. She has 4 career gold medals at the South American Games, including the 100 free individually in 2014; three Olympic medals from the Pan Am Games, and a Short Course World Championship gold as part of Brazil’s 200 mixed medley at the 2014 World Championships.

The injury will likely keep her out of the Maria Lenk Trophy meet May 2nd through the 6th, Brazil’s national championship and primary qualifier for the 2017 FINA World Championships.

Talk about bad luck… Let’s hope for a quick recovery!

I’d say good luck . Ppl can be crushed & die or be left wheelchair bound. Swimming really is not that important i n itself , though it certainy helps to be good enough to do kick endless drills . Ppl without a basic swim background cannot do them & if they can , not enough to rebuild lfull leg use.

When I tore my left calf… couldnt walk but could swim… give her time. Long road to 2020