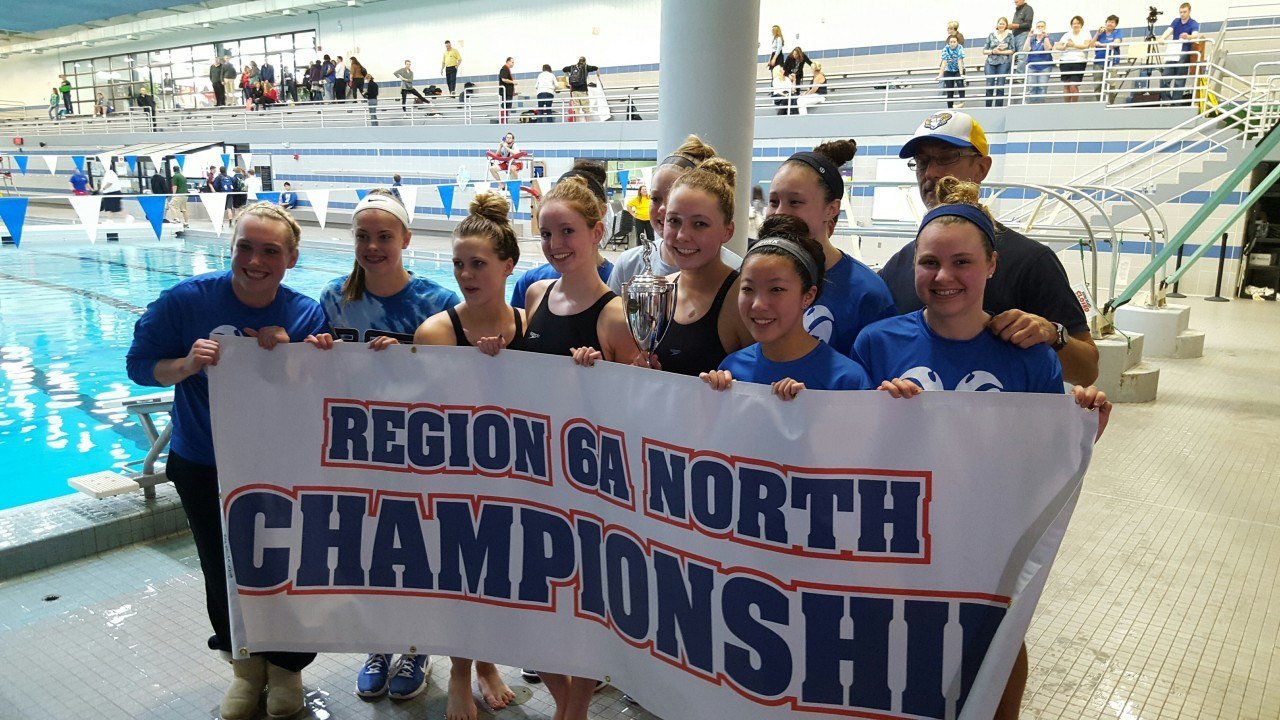 A recent snowstorm – dubbed “Snowzilla” – pounded Northern Virginia into submission, with pools throughout the region closed for days. But the time off didn’t seem to affect the marquee crop of swimmers who competed in Saturday night’s regional 6A high school championship meet. Multiple automatic All-American times were recorded, and many victories came from standout sophomores and one particularly precocious freshman.

Winning the team titles were the boys of Langley of McLean and the girls from Robinson (Fairfax). Depth was the difference for both schools, each of which only had one individual winner.

In the meet’s first individual race, James Murphy, a senior at Robinson, uncorked a 1:35.76 to win the 200 free by more than two seconds. This was the fourth consecutive year that Murphy, a Stanford commit, won the regional title in the 200.

A pair of sophomores prevailed in the 200 IM. On the boys side, Casey Storch of Langley turned in a speedy 1:49.29, finishing with a 1.7 second margin of victory over Will Cumberland of Patriot. Trailing Cumberland after fly, Storch pulled ahead in the back leg and then pulled away in breast and held on in free. On the girls side, Holly Jansen of West Potomac won decisively in 2:03.54, with another sophomore, Rachel Holp of James Madison, taking second in 2:05.54.

There were no surprises in the 50, with senior James Jones of Robinson, a Michigan commit, winning in 20.56. On the girls side, senior Suzanne Dolan of Yorktown, a Duke commit, won in 23.19.

In the boys 100 fly, juniors took the first four spots, with Sam Pomajevich of Stonewall Jackson finishing first in 48.87, followed by Christian Ginieczki of Herndon (49.79), Cole Cooper of Patriot (50.26), and Andres Alacron of Chantilly (50.74).

The meeting was a coming-out party for freshman Lexi Cuomo of Centreville. Wearing a distinctive multi-colored TYR suit, she dominated the 100 fly – winning in 53.96 and dropping more than two seconds from her prelims time. She also became the second freshman in a row to win the event, as Bayer won last year in 53.01 but was not entered this year.

In the boys 100 free, Robinson’s James Jones was the defending champion, but he was dethroned by another senior, Aaron Boyd of Annandale, who finished in 45.20, just narrowly out-touching Jones, who finished in 45.25. Even closer was the girls 100 free, with senior Hannah Baker of Robinson touching in 50.58 – just .01 ahead of Cassidy Bayer.

The girls 500 also came down to two swimmers, with Byrnes and Rongione swimming in adjacent lanes and shadowing each other for the entire race. Byrnes began to pull away after the 350, and while Rongione’s final 50 was faster, it wasn’t enough, with Byrnes finishing in 4:45.60 and Rongione in 4:46.00.

In the 100 back, Christopher Murphy, a McLean senior, powered to victory with a 49.63, followed by Jaya Kambhampaty, a Washington & Lee sophomore, in 50.15. For the girls, Emily Meilus, a Herndon junior, won in 55.34 – narrowly prevailing over Chloe Hicks, a Westfield senior, who came in at 55.49.

In the boys 100 breast, Dorje Wu, a McLean junior, won in 55.48, while on the girls side, West Potomac sophomore Jansen dropped nearly 1.3 seconds off her prelims time to win in 1:02.36, knocking off last year’s winner, Jacquee Clabeaux, a Chantilly junior, who finished  just behind in 1:02.49.

Relays helped put the Robinson girls over the top, as they won both the 200 and 400 free, while West Potomac won the 200 medley. On the boys side, Patriot won the 200 medley, Woodson won the 200 free (1:24.61), and Robinson won the 400 free relay. In one of the most impressive swims of the night, James Murphy closed his celebrated high school career with a blazing lead-off leg – coming in at 44.27, which was nearly a full second faster than the winner of the 100 free.