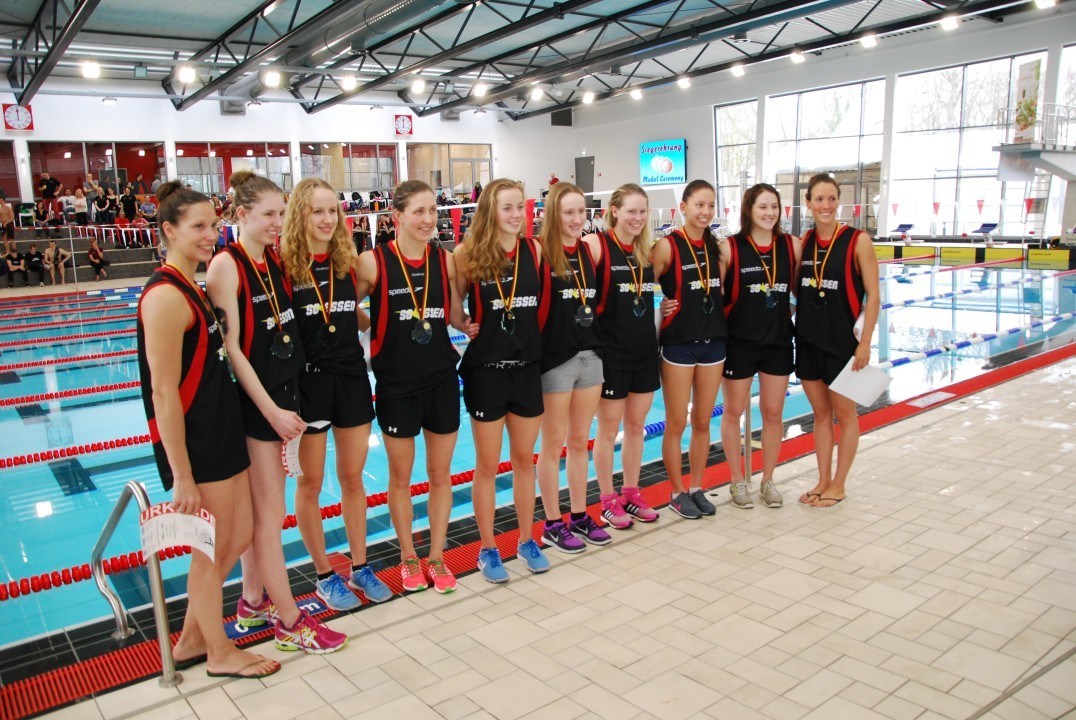 The First Division National German Champions in 2016 are the teams of SG Essen and SV Würzburg 05. The women’s team of the SG Essen claimed the national title for the 8th year in a row, while the men’s squad of the SV Würzburg 05 won for the 1st time.

Over the last two days, the clubs swam the full Olympic program over three sessions (two yesterday, one today.but there are no relays. Every swimmer is only allowed to swim in 5 different individual short course events – but the scoring system rewards those who stay entered and don’t scratch races. Nearly all of Germany’s top swimmers compete in Essen in the top league, including names like Franziska Hentke, Dorothea Brandt, Isabelle Härle, Caroline Ruhnau, Alexandra Wenk., Hendrik Feldwehr, Christian Diener, Yannick Lebherz, and Florian Vogel.

The atmosphere in the newly built “Sportbad am Thurmfeld” in Essen (Germany) was absolutely amazing, especially during the last session. Sometimes the starter had to wait until the teams and the crowd calmed down and it was impossible to hear the announcer’s lane assignments. In this environment full of enthusiasm, with every point and hundredth valuable, left an intense atmospher.

Sometimes, the team battle left swimmers in uncofmortable positions; for example breaststroke specialist Christian vom Lehn (SG Essen) had to swim the 1.500 m Freestyle (15.35,06) and the 400 m IM (4:17,82) – not his usual competition program. The same goes for Yannick Lebherz (1. Potsdamer SV) who said some months ago that he never will compete again internationally in the 400 m IM; today he finished for his team in a time of 4:16,55 in that event and in the 1500 m Freestyle in 15:25,39. Yannick had to scratch his starts at last weekend’s Euro Meet in Luxembourg because he had a cold and still hasn’t fully recovered.

The men also showed some solid performances, like Dimitri Colupaev (SV Würzburg 05) with 801 points and a time of  1:46,99 on the 200 m Freestyle. Colupaev is a a graduate of the University of Southern California in the United States – he retired last year from international-level swimming, but still races at these team championships.

Jan Philip Glania (SG Frankfurt) was the fastest man today in the 200 m backstroke in 1.53,24, building upon fast performances at the Euro Meet last weekend. Alexandra Wenk of the Stadtwerke München finished fastest in the 100 m butterfly in 57,45 seconds. And also Christian Diener (1. Potsdamer SV) is gathering speed at the beginning of the Olympic season with a 51,45 in the 100 m backstroke. Annika Bruhn came close to the 54 second mark in the 100 m Freestyle – finishing in 54,07 seconds.

But besides all the enthusiasm there was a dissonance at the end of the competition when some teams booed during the men’s victory ceremony because the team of the SV Würzburg 05, who won the men’s title, had some swimmers like American Tony Cox and Hungarian Maxim Lobanovszkij in their squad. Both swam fast and collected important points for their team.

In Germany, it is not normal that swimmers from all over the world live and train with German clubs, only a handful swimmers from Austria or Switzerland have joined German swim clubs over the last few years. But the discussion now is more about swimmers who only come to Germany for this prestigious German Team Championships and don’t train regularly with the teams.

Now the top swimmers return to their daily practice and preparations for the Olympic games, the German National Team members will have the next training camp in March.