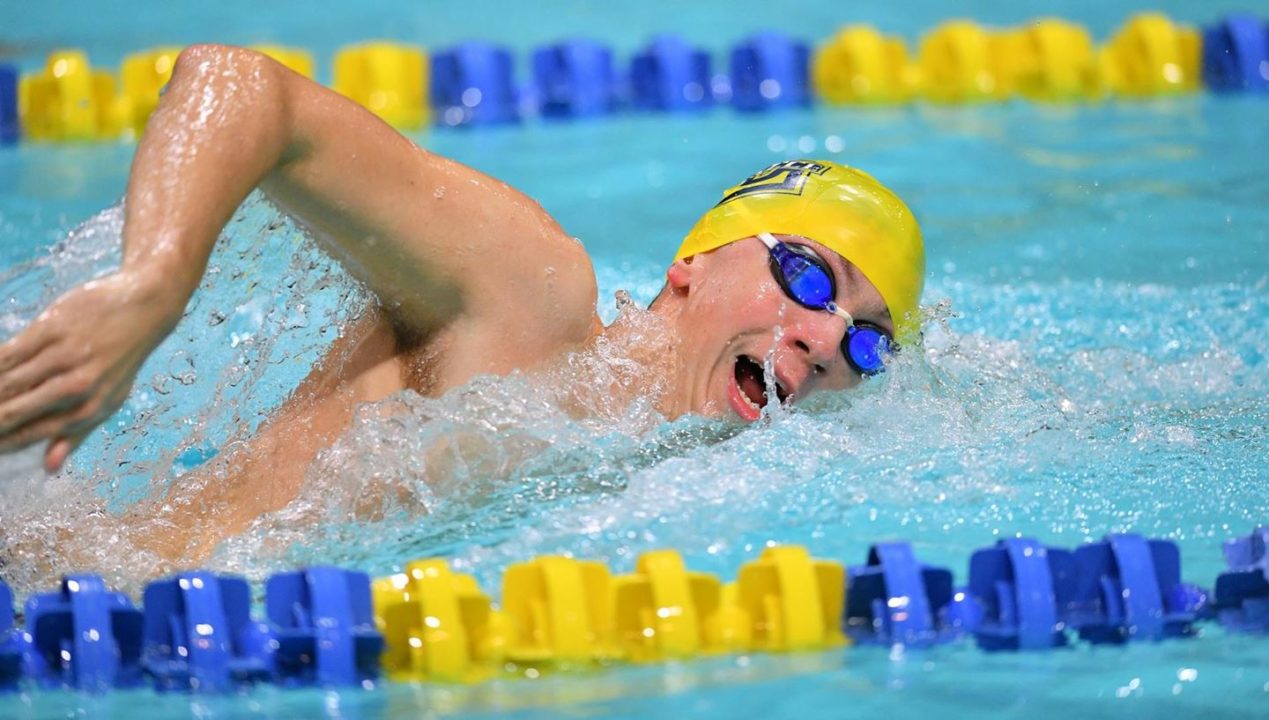 The La Salle men defeated Fordham in dominant fashion, 217-71, while the Ram women topped both the Explorers and the Richmond Spiders. Current photo via Greg Carroccio, Sideline Photos

BRONX – La Salle men’s swimming & diving picked up its second consecutive win of 2020, defeating the Fordham Rams in dominant fashion, 217-71. The Explorers won every single event except the 50 Free, and in the majority of those wins they took first and second place

BRONX – Women’s swimming & diving dropped contests to Fordham and Richmond on Saturday afternoon, bringing its record to 1-2 in the new year and 3-5 overall. Sophomores Sara Rizzetto and Anne Moser led the way for the Explorers with a win each.

Bronx, N.Y. – (January 18, 2020) – The Fordham swimming & diving team had their Senior Day meet on Saturday afternoon at the Col. Francis B. Messmore Aquatic Center, hosting the La Salle Explorers and the Richmond Spiders.

Fordham began the day honoring 14 student-athletes that competed in their final home conference meet.  The Rams would follow by posting women’s wins over both Richmond (181.5-117.5) and La Salle (206-92).  The Fordham men were a bit shorthanded due to illness in their meet with La Salle, falling by a 217-71 score.

Senior diver Molly Dunn led the women, as she won both diving events with NCAA Zone Diving qualifying marks.  She won the one-meter dive with a score of 276.85, while setting a personal-best with a winning score of 284.75 on the three-meter board.

Junior Hannah McGee also had an impressive meet, taking first in the 100 butterfly in 56.85 seconds and in the 200 butterfly in 2:06.49.  She was also a part of the winning 200 medley relay with Michelle Martin, Amelia Bullock, and Theresa Mullen, as they posted a time of 1:46.12.

Martin, Bullock, and Mullen each had an individual win as well, starting with Bullock in the 100 breaststroke in 1:05.34.  Martin then took first in the 50 freestyle in 24.23 seconds, with Mullen grabbing the top time in the 100 freestyle in 52.97 seconds.

The Fordham swimming & diving team will next be in action on Wednesday, January 22nd, as the Rams host their final home meet of the season against the Iona Gaels, beginning at 5:00 PM.

NEW YORK, N.Y. – Richmond swimming and diving was back in the pool Saturday afternoon in New York City. The Spiders took on a pair of Atlantic 10 Conference teams at the Col. Francis B. Messmore Aquatic Center at Fordham University in the Bronx. The Spiders fell to the host Rams by a 181.5-117.5 score and defeated the La Salle Explorers 187-112.

In individual events, Grace Palfreyman (Bridgewater, N.J.) was the first point scorer, finishing the 1000-freestyle in fourth place with the team’s season-best time of 10:53.21. The 200-freestyle saw Manning and Medlin finish in fourth and fifth, with times of 1:55.47 and 1:56.30, respectively.

Gouger added Richmond’s first first-place finish of the afternoon, taking the 100-backstroke with a time of 56.95. Jordan Kohut (Raleigh, N.C.) and Mattie Williams (Lake George, N.Y.) finished in third and fifth at 58.54 and 59.29, respectively. Kohut set a season-best time in the event. Gouger added another first-place finish in the 200-yard backstroke at 2:03.44.

The 100-breaststroke saw freshman Sarah Greene (Tega Cay, S.C.) take second place at 1:07.33 and senior Lexie Gilbert (Annapolis, Md.) added a third-place finish at 1:07.47 as it was the first time she’s raced in the 100 breaststroke this season.

Gouger added another third-place finish in the 50-yard freestyle, finishing in 24.74. The 100-freestyle saw Medlin and Ronan earn second and fourth-place finishes, respectively. Medlin recorded a time of 53.08, and Ronan was 53.81.

Richmond is back in action next Friday at the Robins Center Natatoruim as the Spiders will host the Villanova Wildcats at 3 p.m. on Senior Day. The senior class of Maddy Chao (Niskayuna, N.Y.), Gilbert, Gouger, Manning and Weiskopf will be honored before the start of the meet.