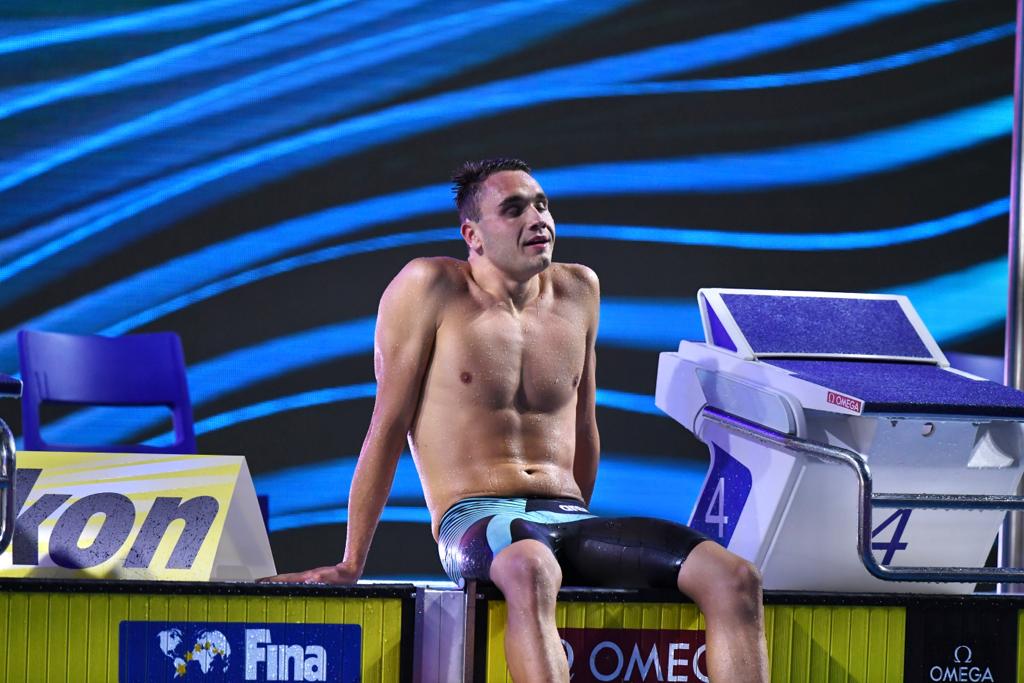 Milak faced a tremendous amount of adversity in the lead-up to the 2022 World Championships, but still managed to break the world record in the 200 butterfly. Current photo via Fabio Cetti

It’s a fairly constant concept in the world of sport. Once an athlete hits a certain level of greatness, of dominance, it almost becomes taken for granted that we’ll continue to see it again and again.

Such has long been the case for the now-retired Michael Phelps, the ever-dominant Katie Ledecky, and recently, Hungary’s Kristof Milak has started to reach that level, at least in one event.

After that performance, Milak’s dominance in the event really took off. He rolled to a decisive Olympic gold medal in a time of 1:51.25 last year, a race we later found out was done shortly after he ripped his suit and had to do a last-minute change.

Coming into the 2022 World Championships, which would take place in his hometown of Budapest, Milak was the owner of six of the 10-fastest swims of all-time in the 200 fly, with Phelps holding the other four.

And given that Milak won the Olympic title by two and a half seconds despite the suit rip, he came into Worlds as a lock for gold and for many, it was a foregone conclusion that he would lower his world record.

But perhaps, it shouldn’t have been as much of a slam-dunk as we thought.

After the 200 fly in Tokyo, Milak was upset he didn’t break the world record. As much was clear for anyone who saw his post-race reaction in the pool.

“I was so sure that I had wasted so much energy on the swimsuit that I wasn’t going to get this world record – so I just swam,” Milak told reports after the event. “These little things, little nuances can take their toll on your swim because you lose concentration.”

After the Games, Milak split with his coach of eight years, Attila Selmeci, and joined forces with Balazs Virth.

A well-known coach in Hungarian swimming circles, Virth helped lead Daniel Gyurta to the Olympic title in the men’s 200 breaststroke at the 2012 Olympics in London, and also coached Boglarka Kapas to the 2019 World Championship title in the women’s 200 fly.

“I felt it would be better for me to change, I could prepare myself more effectively, in a way that was more favourable to me,” Milak told RemoNews last year.

“I thought a lot about who to pursue my career with, I listened to the opinions of different people, I examined the possible solutions in all aspects and perspectives, and I chose Balazs.”

Switching coaches is always a gamble for any athlete, especially one who has already reached the top of their sport. Milak could’ve stuck with Selmeci and continued to dominate the 200 fly and build on his breakthrough 100 fly swim from Tokyo (49.68), but he wanted more.

Having dealt with lung issues for years, Milak ultimately decided to have nasal septum and tonsil surgery in December 2021 to alleviate the issues. He tested positive for COVID shortly after the 2021 SC European Champs, which prevented him from racing a SC Worlds in Abu Dhabi. With the opening in his schedule, he decided to take care of the problem that he said had been hindering him throughout his elite swimming career.

“I’ve been trying to find a suitable period for three or four years, and now I’ve come to the point where I already feel the need, it’s not pleasant to live with this problem,” Milak told Hungarian outlet M4 Sport last year.

“It has quite a big influence for my everyday life and performance. I will be able to return to full-fledged training in January, which will give me enough time to prepare for the long course world championships in May.”

After undergoing that procedure, the 22-year-old endured more bumps in the road in the lead-up to Worlds, dealing with illness prior to the Hungarian National Championships in April.

“My prep (for nationals) went pretty well, until I got an ugly illness,” Milak told FINA in April. “I had a high fever during the entire last week at the training camp in Tenerife, and that dismantled me completely.

“(I) needed a week to regain some strength, so coming here I had no time targets in mind, rather a goal to learn more on myself, what I’m capable of achieving in this shape.”

“The illness seriously hindered him, let’s not forget that,” coach Virth told Index.hu of his swims from nationals. “If he is healthy, he would have already swum 1:52. But bad luck struck us, he got sick again for a week after the Hungarian championship.

So while he regained his form relatively quickly, considering the break he was forced to take because of surgery and the illness he dealt with, the stars still had to align perfectly for Milak to reach his world record form in Budapest.

He managed to do just that and then some, as Milak, racing in front of his home fans, got out to a blistering start in the 200 fly final before holding strong to break his world record in a time of 1:50.34.

After producing the fastest time in history with numerous training interruptions, Virth indicated that Milak could’ve been even quicker if everything had gone smoothly in the months leading up, but added, “let’s not be insatiable.”

For Milak, he relished the moment of competing in Budapest.

“I can’t really recall my swim, I think I pushed a bit harder over the first 100m, that’s why it was so painful at the end but I really wanted this world record, wanted it more than anything,” he said post-race.

“The crowd gave me a tremendous boost… I mean, this is my home, my pool, I train here, I race here, lane four belongs to me, I really wanted to show something big for these fantastic people.

“The Olympic gold means a lot but winning here, with a new world record, in front of 4000 people – that eclipses everything.”

So while we may have taken Milak winning and breaking the world record in the 200 fly for granted in Budapest, it was far from a certainty.

And given that he was able to do so in the face of adversity, he is now eyeing becoming the first man sub-1:50.

“I just need a little bit more time to achieve this. I really want it and if I make it, then perhaps this world record may not stand for 10 years, but maybe 20.”

That was a courageous swim. Kristof could have played it safe and won easily, but he really went for it and risked cratering at the end. That decision will serve him well when all the stars are aligned. He definitely has a sub-150 in him.

where is the smoker commenter?

Let’s hope, he won’t be sick until the EC because one of his training partners, Boglárka Kapás is infected by covid now again. She announced this on her new Instagram-post. As reminder, she was the first elite swimmer back in 2020 who got the disease.

I feel like we are still waiting to see a peak Milak race after a full, uninterrupted block of training. Same goes for Chalmers.

Too bad, the European Championships in August in Rome are in an outdoor pool. I think we have to wait another year before Milak will get another shot at the 1.50 barrier.

The meet is being held at the Foro Italico complex – the same venue used for the 2009 World Aquatic Championships (you know, the one where 43 world records were set). Even though swimmers won’t be wearing polyurethane super suits, precedent indicates that it won’t be a slow pool.

I’am just referring to the Hungarians own expectations:

Has there been any WR’s since the scandal in 09?

As long as you don’t ride home on him

A record that would last 20 years, he’s confidence is really high. Perhaps when he breaks 1:50 some people will start moving into the 1:52s

I agree. Although, we thought that Phelps 1:51 would last at least another decade

The stronger records become, the harder it will be to break them

Right, but then the question ends up being what’s the likelihood there’s a THIRD guy that’s basically a generational talent in the 2 fly that quickly?

The last 50 is going to be very interesting 🧐