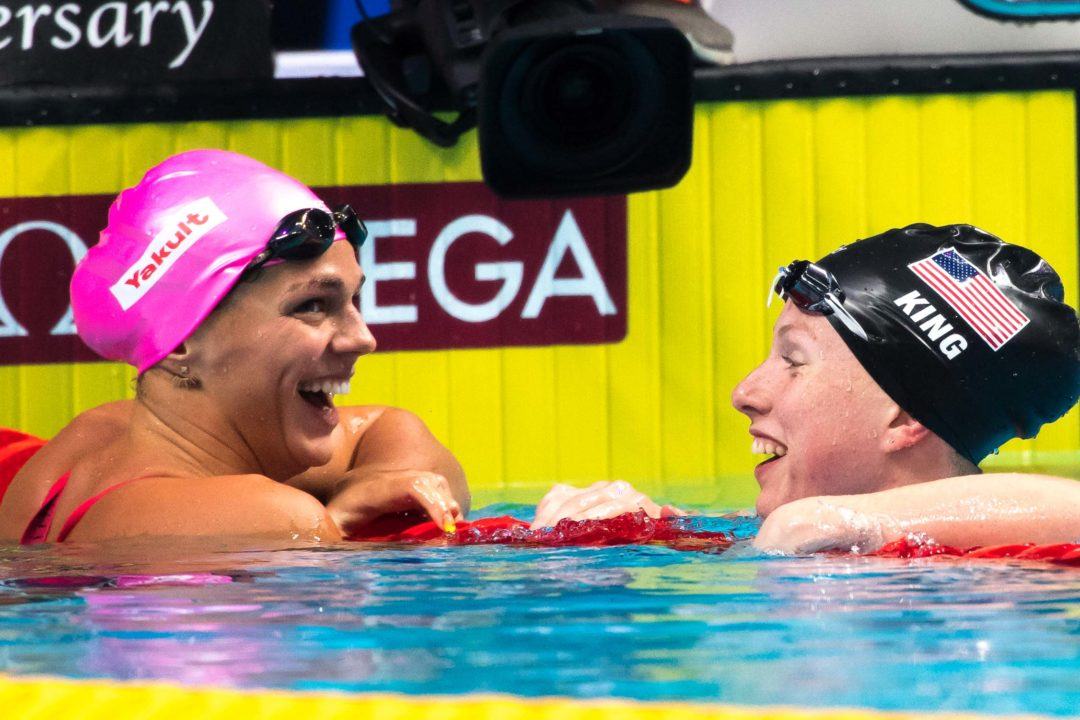 The Lilly King-Yuliya Efimova rivalry is one of the top draws of this weekend's Champions Swim Series stop, but what the pair will do as a team is almost as likely to turn heads.  Archive photo via Mike Lewis/Ola Vista Photography

While the reignition of the Lilly King–Yuliya Efimova rivalry is one of the top draws of this weekend’s 2019 FINA Champions Swim Series stop in Indianapolis, what the pair will do as a team is almost as likely to turn heads.

The breaststroke duo will swim as teammates on the mixed-gender and mixed-nationality 4×100 freestyle relay Friday, and then race against each other as the anchors of separate 4×100 medley relays Saturday, FINA announced. Their free relay also includes Americans Josh Prenot – also a breaststroker – and butterflier Zach Harting.

The teams were drawn at a technical meeting Thursday afternoon in Indianapolis.

King and Efimova have not raced each other since the 2017 FINA World Championships, but have consistently traded world No. 1 swims back and forth since then. So far in 2019, Efimova posted world-leading times in all three breast events at the Budapest stop of this series in early May, but King fired back a week later at the Bloomington Pro Swim Series stop to claim world No. 1 times in the 50 and 100 breast for herself.

thats a wild idea – but who knows – it might well work

You go up on the Omega page upper right corned, click on calendar and can set to Indy,

The live results link above goes to Budapest, FYI. TY

I still want to see King approach the 200 lcm br with the same swagger and finger-wagging that she approaches the 50 and 100 with. She tends to tone down her rhetoric whenever the 200 rolls around

pay attention to your affirmations – she might well step up on the 200 breast and make u look ridiculous ….

All those 50 flys against Andrew Wilson need to show

Would someone please speak up and tell FINA how stupid this is. Just use the relay money to pay some bonuses. UFC pays performance bonuses and I think fina can do the same. So if Lilly and her Russian friend have a great race kick them down an extra 5 or 10k.

As someone who is going to the meet, I’d much rather see these relays than know there’s a potential that a swimmer or two might get a bonus if they hit some arbitrary time. I want to see racing for racing’s sake.

Making swimming more interesting to nonswim fans could be the point, maybe not stupid. Putting a little mix into the 100this/200that monotony could make meets more interesting and less full on intense. I think it’s a great idea!

That team is going to get yeeted by the other ones