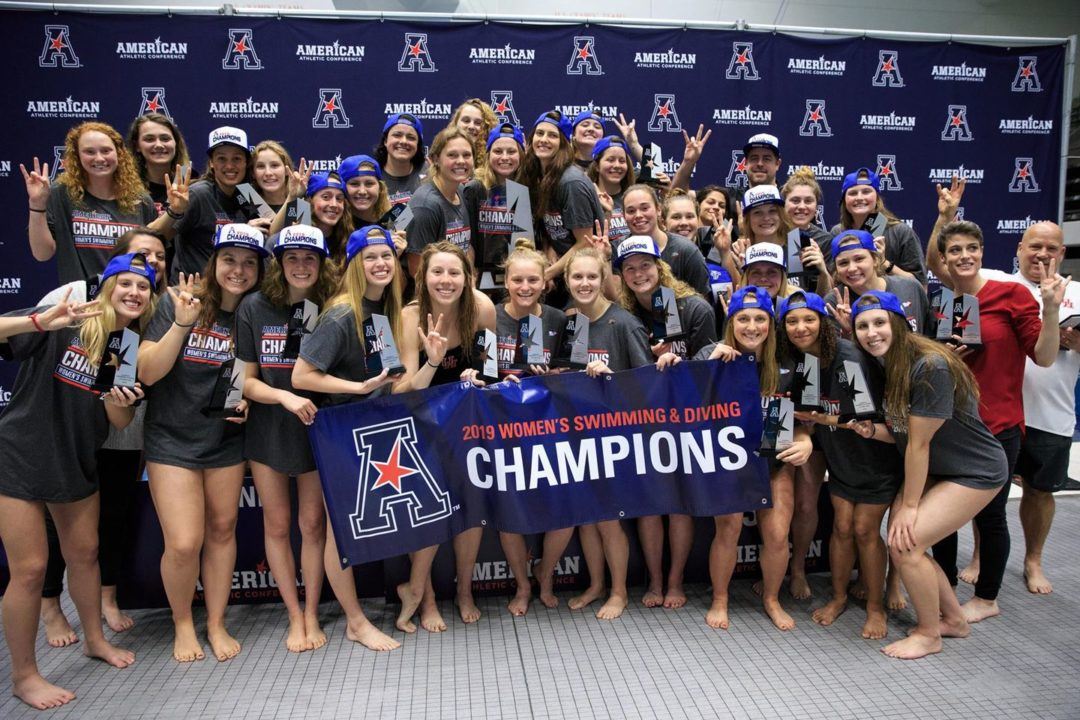 The Cougars of Houston downed both Incarnate Word and UT-Permian Basin in a double dual meet on Saturday, September 28th. Incarnate Word also came out victorious against UTPB in the men’s dual. Houston won 9 of 13 events in the women’s meet, including both relays and both diving events.

Incarnate Word’s Brenda Diaz Martinez pulled off the distance double, taking both the women’s 500 free and 1000 free. The sophomore touched in 10:11.92 in the 1000, winning the event by nearly 20 seconds. With that swim, Diaz is currently ranked 12th in NCAA Division I, and more signifiacntly, is the highest ranked swimmer from a non-Power 5 conference (ACC, Big Ten, Big 12, Pac-12, SEC) at this early point in the season. In the 500, Diaz clocked a 5:00.59 after swimming a very consitent race. Diaz is a sophomore, but it’s her first year at Incarnate Word, after spending her freshman season at Fresno State.

The Cougars defeated Incarnate Word 204 – 158 and UTPB 158-85. Full results can be accessed by clicking HERE. Full scores can be found HERE.

WORDS FROM COACH WOCHOMURKA
“It’s good to be racing again. We saw a lot of encouraging things today, and a lot of areas where we can improve. I’m proud of our effort today after a very tough week of training, racing and travel.”

UP NEXT
Houston will return home to face conference foe Tulane on Oct. 3 at the CRWC. The meet is slated to begin at 10 a.m.

SAN ANTONIO– The University of the Incarnate Word swimming and diving team closed out its first meet of the season at home with the men and women topping the University of Texas Permian Basin 140-93 and 202-34, respectively. The women ultimately were edged out in points in their dual meet against the University of Houston.

The day kicked off with 1M diving, and saw veteran Cardinal Dawson Martinez secure first place with a score of 304.1. On the women’s side, it was Ana Lucia Garza who showed out to place third with a finals score of 264.1.

Later in the day, Dawson Martinez took first in 3M diving with a finals score of 318.3. Teammate Timothy Newton came up right behind, securing second with a 301.35 score. Kaivon Dixon racked up points to kick off his freshman year, earning fourth with 274.

In the women’s 400-yard medley relay, UIW’s young squad of Kristen Straszacker, Mariana Ruvalcaba Cruz, Sophie Taylor and Ximena Conde narrowly missed the top spot to place third with a time of 3:51.84. Fernando Ruvalcaba Cruz joined his brother in the top-seeded men’s 400-yard medley relay, along with Oleksandr Karpenko and Christopher Lestage, to knock out a quick time of 3:23.01, a time that had three of four splits under 50.45.

UIW topped both the men’s and women’s side of the 1,000 freestyle. Freshman Brenda Diaz completed her swim in 10:11.92, 17 seconds faster than the opponent who came in second. Sergio Duran Mata had even more of a lead in the men’s race, finishing with close to a 30 second lead with a finals time of 9:33.32. The two later went on to dominate in another distance event the — the 500 freestyle. Diaz took first, finishing in 5:00.59, while Duran Mata followed suit and also snagged first with a time of 4:43.50.

In the men’s 50 freestyle, Christopher Lestage took first with a time of 21.74.

The Cardinals men and women took the top spot in both sides of the 400 individual medley, with Ximena Conde touching first for the women with a time of 4:29.59. Hector Ruvalcaba Cruz also finished in a speedy time of 4:03.17.

Attempting to mimic his speedy split time in the day’s earlier relay, Fernando Ruvalcaba almost succeeded with an impressive time of 50.48, still notching first and finishing close to seven seconds before the second-place finisher. Freshman Kristen Straszacker flexed for the women in the 100 backstroke, taking second while going 56.87.

Oleksandr Karpenko rocked the men’s 100 breaststroke and finished in a time of 56.17. On the women’s side, Mariana Ruvalcaba Cruz landed third in a close finish with a time of 1:05.88. The margin of difference in the top three finishers in the women’s 100 backstroke was less than half a second.

The day’s final relays saw the UIW squad of Brenda Diaz, Magda Vega Vidal, Kristen Straszacker and Natasha Fung take second with a finals time of 3:35.78. The men dominated in their 400 freestyle relay heat, with the squad of Leonardo Sanchez, Garrett Hollcroft, Robert Anaya and Norbert Aranyi snagging first with a time of 3:11.02.

The women’s upcoming schedule includes traveling to Houston to face Rice University on Oct. 11-12, while the men’s next time out won’t be until Oct. 26, when they travel to Little Rock, Arkansas, to face the UALR Trojans and Rhodes College.

UT Permian Basin men’s and women’s swimming and diving continued the start of its season with its second straight meet against Division I competition, swimming against Houston and Incarnate Word Friday afternoon in San Antonio, Texas.

“We competed well at this meet coming off of another competition versus a Division I team,” said Head Coach Cameron Kainer. “I think we can see what we need to focus on for the rest of our fall campaign.We have some good confidence going into the rest of the season. I”m proud of our coaching staff and looking forward to more exciting meets. ”

Garrett Martin set a new season best score in the men’s diving 1m, recording a score of 293 to increase his National Qualifying score.

Jack Delfeld placed second in the men’s 100 Breaststroke, swimming the race in a time of 59.61.

Karley Thompson recorded a solid score for the Falcon women in the women’s 100 Backstroke, taking 6th place in 1:00.29. Jasmine Tscherne finished two spots back in 1:01.70.

“Having these competitions against DI programs give us an opportunity to see what we are good at, and also to see what we can improve upon,” said Kainer. “We like racing up to that level of competition and showing we can go against the big guys.”

Both teams are back in action next week when the Falcons compete in their first of two home meets of the season at the UTPB Pool against Henderson State. The teams open competition Friday night at 5 p.m. and will conclude the weekend Saturday morning at 10 a.m.