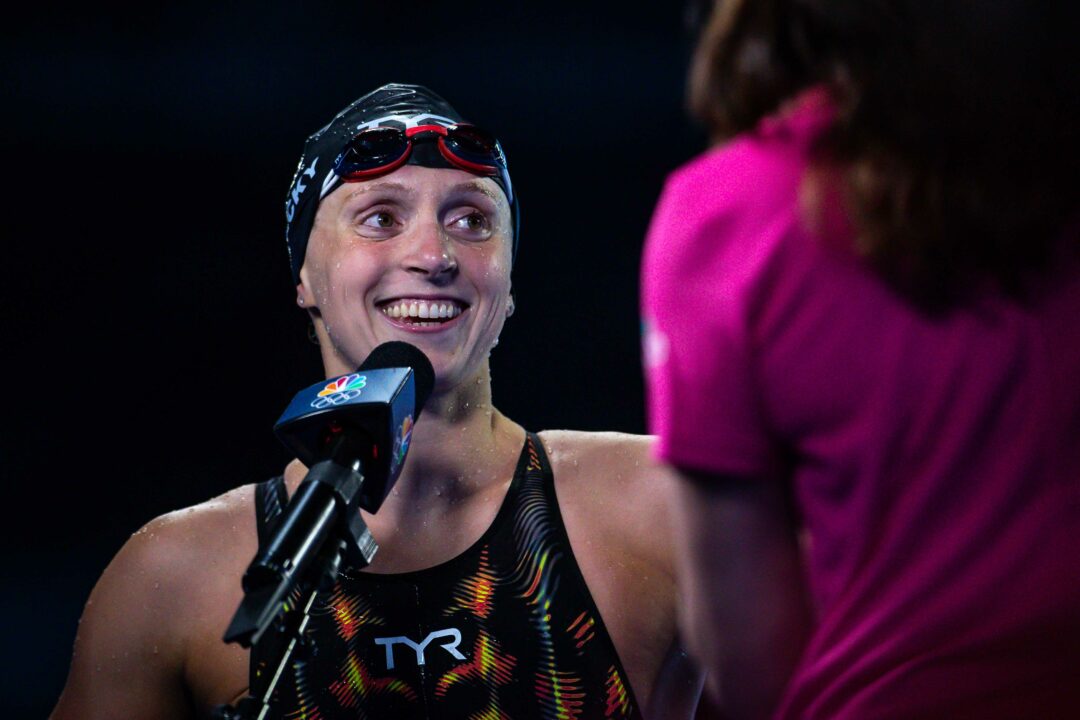 She certainly wasn’t thrilled with the time, but Katie Ledecky successfully qualifies for her third U.S. Olympic team as she wins the women’s 400 freestyle Current photo via Jack Spitser/Spitser Photography

She certainly wasn’t thrilled with the time, but Katie Ledecky successfully qualifies for her third U.S. Olympic team as she wins the women’s 400 freestyle by well over three seconds in 4:01.27.

Ledecky, who was two seconds faster than that at the Mission Viejo Pro Swim in April, said she was surprised by the time and thought she had gone significantly faster. Nonetheless, she qualifies for Tokyo, but will have her work cut out for her after Australian Ariarne Titmus blasted a 3:56.90 at the Australian Trials on the weekend.

The runner-up spot goes to Paige Madden, a three-time individual NCAA champion this past season at the University of Virginia, who took a full second off her personal best of 4:05.92 in 4:04.86 to likely etch her name onto her first Olympic team.

It will be interesting to see how Timus handles the race as a favorite. I’d think she’d like to be seen as an underdog.

The SwimSwam community needs to come to terms with Ledecky’s decline. She has not been the same since Rio. The coaching change hurt her and her technique has changed drastically. She’s not unrested, this is just her speed now. Every year, she lulls everyone to sleep with a random good meet at a pro swim, then she underperforms when it counts. I said back in 2018 Titmus would beat her in Tokyo and I got like 100 downvotes, now I’m about to be proven right in a few weeks. Between Titmus and Quadarella, at this point Ledecky will be lucky to win a single gold. She’s still a great swimmer and has had a great career, but that old Ledecky… Read more »

I know that was the headline, but in the press conference a reporter asked “What’s it like tapering for this meet?” And she responded, “Well, it’s been a couple years since I’ve rested…” and then kind of waffled evasively for a while. I don’t think she claimed to be tapered and sounded like she was being careful to say she had a little rest for the first time in a while.

Not saying she’s not starting her Olympic taper, but I’d be surprised if she was on the kind of full taper people seem to be thinking she’s on.

Man this brings me back to hearing people in 2011 talk about Phelps.

Eventually people that dismiss athletes based on age or whatever will be right because that’s just the natural progression of a professional athlete. Very rarely does an athlete go out on top (i.e Jordan, Bolt), especially a swimmer. However, I don’t think as of this year Ledecky is finished.

Yeah, that was my point. Same with Jordan. When Jordan was with the Wizards in his later career, he didn’t even make the playoffs.

However, Phelps did, more or less, go out on top in 2016 with five gold medals and a silver.

so he lost to a guy who has been on doping scandals since his 20 years old but nobody does a thing about him.. and to a guy who does everything he can to avoid being tested..

Sampras went out in style winning the US Open.

She was 7 when Lochte made his first Olympic team. She’s not declining due to age at 24.

If she’s looking off at the 2028 Trials, comment this again and it’ll be a good point.

“She has not been the same since Rio.”

Hold your horses there. Also, have a little respect.

If her post Rio career is a “decline”, then I would like to see his definition of a successful career.

This is a bit harsh. She hasn’t been the same since Rio, but was astonishingly good in Rio and she’s still been very, very good since.

It is however exceptionally difficult to continue to improve consistently over 3 Olympic cycles. Hell – I think only 2 women have been able to win three on the trot. And they had both declined by their third win. Every cycle people expect swimmers to come out and just be better than they were 4 years ago. History is full of legendary swimmers who have tried to hang on for another cycle and come up short. That’s probably as it should be.

Her legacy, in my opinion, is set. Whatever happens in Tokyo.

I still think she’ll win the 800 and the 1500 based off just how far ahead she is of everyone else in the world. The 200 Titmus will most likely win unless something drastic happens, the 400 will be very interesting. I thought if ledecky was 3:58-3:59 (like she did in 2016) she’d have a very good shot of winning, now I’m not so sure

I miss your thorough analysis of Katie Ledecky swims.

I also miss your scathing diss at Ariarne Titmus.

I thought over time he had become quite complimentary of Ariarne.

I Love the TYR new Us Flag design suit ….suits her so well .