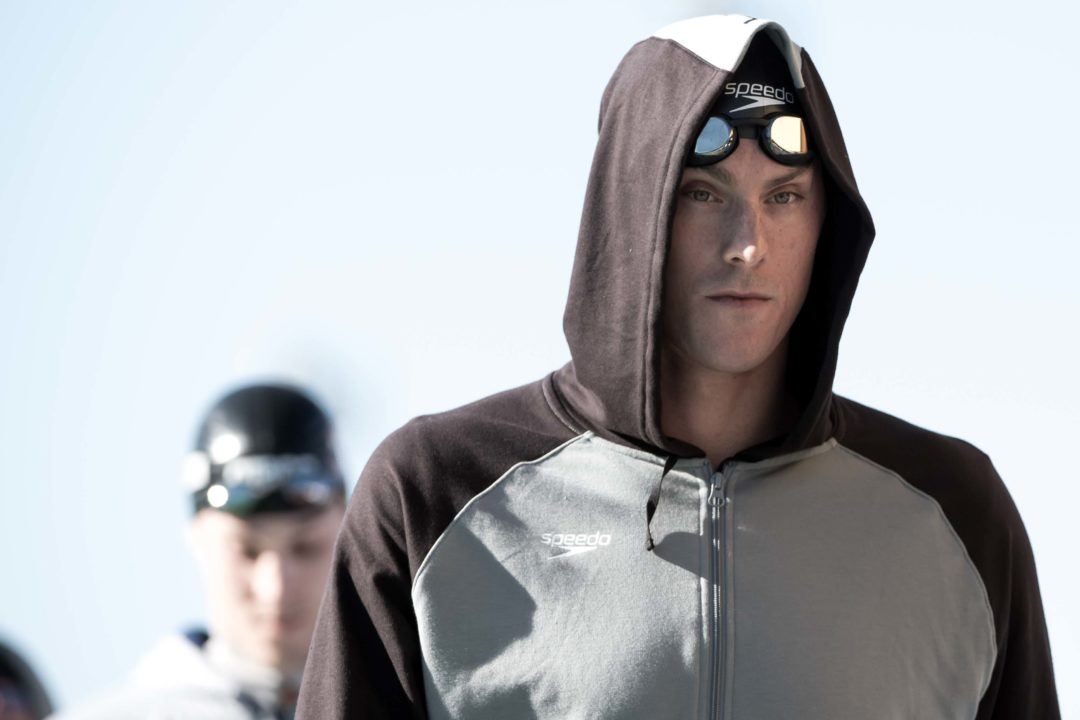 Conor Dwyer's scratch in the 200 IM B final tonight bumps up Michael Andrew from the C final. Swimming in the B final will give Andrew an automatic spot in the 200 IM at Junior Worlds. Current photo via Mike Lewis/Ola Vista Photography

After finishing ninth this morning in 2:14.32, double-event champ Kathleen Baker of Cal has scratched out of the B final of the 200 IM. Similarly, after finishing 13th in 2:01.96 this morning, Conor Dwyer of Trojan Aquatics will also sit out his 200 IM B final.

Dwyer’s scratch bumps 17th-place finisher Michael Andrew of Race Pace up into the B final. Given Dwyer’s scratch (provided Andrew doesn’t DQ in the B final tonight) Andrew is guaranteed an entry in the 200 IM at Junior Worlds. If Dwyer had swam tonight, Andrew would have swam in the C final, where he and six other boys would have competed for the second Junior Worlds spot.

You can read more about the Junior Worlds selection procedures here.

Baker’s scratch bumps Kristin Malone of Texas A&M into the B final of the 200 IM.

The other B final scratch of the night comes from NYAC’s Josh Schneider, who finished 11th in the 50 free this morning with 22.49. With that scratch, NC State’s Justin Ress moves up into the men’s 50 free B final.

The biggest news in scratches tonight, reported earlier today, is that Katie Ledecky of Stanford has opted out of swimming the 1500 free. The selection procedures for non-Olympic events (or events that are being considered non-Olympic for the sake of this meet) will still allow for her to swim it in Budapest.

Conner Dwyer is lucky to have made that 800 free relay. He has been doing everything but seriously training. He deserved that long break. His Instagram tells the story. ? He was living the life of a movie star or model with actual movie stars and models. He’s back at it now.? I wish him continued success. Oh…and his girlfriend or friend girl is absolutely stunning. ?

So, even if Michael Andrew was bumped up to B final due to a scratch, he’s still guaranteed a Jr world spot (barring DQ)?
Is that the intent of making the B final (or A final for that matter)?