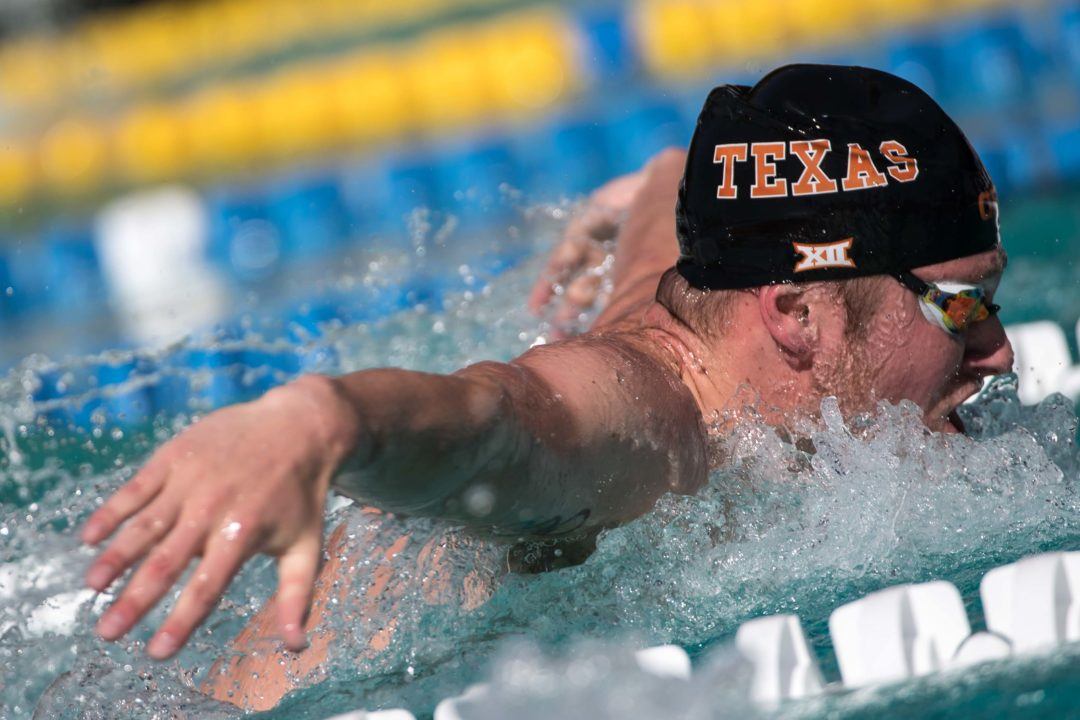 This was Conger's 4th-best time ever, and a much better swim than he put forth on Wednesday in prelims. Archive photo via Mike Lewis/Ola Vista Photography

Texas Olympian Jack Conger time trial-ed a 200 free during TTs today in Indianapolis, going 1:47.50. That improves upon his time from the 200 free prelims earlier in the meet by a lot– he was just 1:48.71 Wednesday morning.

Had he gone that time in prelims on Wednesday, Conger would’ve been 5th, safely making it to the A final. That time in finals would’ve also been 6th overall, just .01 ahead of Caeleb Dressel‘s 1:47.51 from Wednesday night.

It was surprising that Conger wasn’t able to make the A final this week after he was on the Olympic 4×200 free relay in Rio and he won the 200 fly on Tuesday in Indy. With his time just now, though, Conger might have earned himself some consideration for a spot on the men’s 4×200 free relay (at least for prelims) in Budapest.

Only those who qualify for Worlds relay-only (just Conor Dwyer of the 200 free top six this week) must swim the relay either prelims or finals. Considering someone like Dressel’s loaded schedule, he could drop out of the relay and give Conger a spot. Further, none of the top 6 (besides Dwyer) HAVE to swim the 4×200 free relay, since they already made the team individually.

Either way, it’s Conger’s 4th-best time ever, and a much better swim than he put forth on Wednesday.

I would like to see conger swim the prelims, with a shot at swimming finals. I really think Dressel needs a break. 50/100 free, 50/100 fly and relays is a huge schedule. (assuming he qualifies in the 50)

But like dressel said in a interview he is trained to swim those types of loads. He did manage to go 40.00 on his 12th swim at NCAAs. I think he could handle it but it would be better for him to get the rest and not have to swim any 200

20
0
Reply
Attila the Runt
Reply to  That guy

I think he and Troy view this Worlds, at the beginning of an Olympic quad, as a test meet. See how much load he can handle on a big LCM stage. They know from Rio that he can deliver on a relay and an individual event, and they know from NCAAs that he can deliver in a ton of events. Their plan/goal is all relays and 4 events at Tokyo. Why not try to be the new GOAT? Troy always says Dressel is the greatest talent overall he’s seen since Lochte.

Do you guys even realize that Sjostrom regularly does 50/100 free/fly as well as ALL RELAYS PRELIMS AND FINALS (on top of individual 200 free on certain occasions like in Rio).

Trickett regularly did 50/100 free/fly as well as ALL three relays. Trickett also sometimes swam individual 200 free just like Sjostrom. Inge did the same.

I don’t even have to mention the Iron Lady or Ledecky.

Other younger swimmers with such workload:… Read more »

Sarah, Hosszu and Belmonte are by far the best swimmers for their respective countries. Without them they’d have zero chance of earning a medal, perhaps even qualifying for a final.

The USA team are not only the World’s number 1 they have incredible depth and can still win comfortably without Dressel. Testimony of that depth is that Olympic relay members Conger and Bentz didn’t even qualify for the 200m A Final. Phelps and Lochte are also missing from the Rio squad that won gold last year. And yet they’re still considered favourites in Budapest.

You’ve misunderstood me Dylab. I’m talking about the 4×200 relay here, not individual events.

With so many events he swim, One event Joe hopes Dressel also be able to win individual worlds medal and Olympics good medal…. One day.

One event Joe will enter 50/100 fly as well as 100 free. No doubt one event Joe would have made no fuss swimming all relays had Singapore qualified/sent any relays, just as he usually did the NCAA.

Fragile Dresssel must not break himself swimming 4×200,. Ooopppss look at what happened to Cam McEvoy last year.

When did Dressel ever make a fuss?

One event joe….it took a few minutes to figure that one out..I think that’s gotta be his new name

Yeah, and Sjoestroem didn’t make the final of the 50 free in Rio. And Hosszu got beat by Dirado in the 200 back at the end of the meet, too. That scheduled definitely impacted both of them. (And I know Tussup wasn’t happy about Hosszu having all those relay swims.)

It really just depends on what your goals are – do you wanna be Kosuke Hagino at Worlds in 2013, where he swam a billion events, made a bunch of finals but only won two silvers instead of maybe winning a couple golds if he’d pared his schedule down? Or do you wanna be Joe Schooling last year, where you only really swim one event but you win it?… Read more »

The best time to swim every event is at the back to school meet in sept. Or if he wants to win a lot of pumpkins at the oct meet. Sometimes it real obvious that it’s a bad idea so I’ll just trust the coaches to know if they need adjust his schedule

Just because they did it doesn’t make it optimal. Michael Andrew 2015 jr worlds…how did that one go? It’s a coaches job to step in and prevent an athletes from over competing or entering excess events when it’s detrimental to their performance in their top events. So yes conger should do the prelim in the 4×200

Andrew and Dressel also train very differently. Besides, as people have said already, this is kind of a test meet to see how he can handle the load. Maybe he won’t do well- and if he doesn’t he won’t make the mistake again, or he’ll train even harder.

Hope this means Dressel is dropping the relay. But it’s up to him I guess

Lol is he the head coach now?

I thought he had to be on the relay because he qualified?

PVDH — that rule only applies to people who’ve only qualified for Worlds as a relay-only swimmer. Since Dressel has qualified in a bunch of things individually, he’s not obligated to swim in the relay by FINA rules.

Ahh, thanks for clearing it up!

When it didn’t matter.

Put this up didn’t mean I suggested US should put him in this relay.
I just seeing a pattern in his swim, he’s liked his 2015 form.
The absolutely same 100 fly cost him pretty much.

I really don’t know what to think about adding Conger to the relay. You obviously want the four fastest guys, but the fact that he didn’t do well in the prelims here doesn’t necessarily give me a ton of confidence he will do well at WC on a prelim relay. He also said this week in an interview that he struggles to get going for prelims. And yes I understand he swam a quick prelim relay time at the Olympics, but he’s clearly not at his ’16 level in this event. Not that he needs to be 1:45 to help them qualify, so if Dressel opts out… Litherland could also argue for a spot seeing as he’s on the team… Read more »

I agree. I think conger would swim well in relay prelims (not that US needs him at his best to qualify.) but it’s kind of the principle of the thing. He didn’t swim fast when he needed to. It would be one thing if he put up this time in the B final, but he scratched the B final and time trailed the race when he felt he was ready to swim it again.

Yes, put Conger in prelims in Budapest. The US could use him. Another question– with Dressel swimming Fly finals on the medley, does this mean they ask Townley Haas (3rd place at trials) to swim the free prelims of the medley (to rest both Adrian and Dressel)?

They probably go with the 3rd fastest split from the 4 x100 free relay, which happens before the medley

Better swim but still far from his best.

I hope Dressel will let him swim the relay.

Litherland is still under strong consideration for the prelim spot in the 4×200 free relay if the coaches decide not to use Dressel. He made the final while Conger didn’t, and is a good freestyler. If I was Dressel tho, I would fight hard for the relay spot. Being clutch for USA relay is far more important than individual events. Maybe he can give up one of his individual events, like the 50 fly to Jones.

Why would he give up the 50 fly for a prelims swim on a relay? That makes no sense.