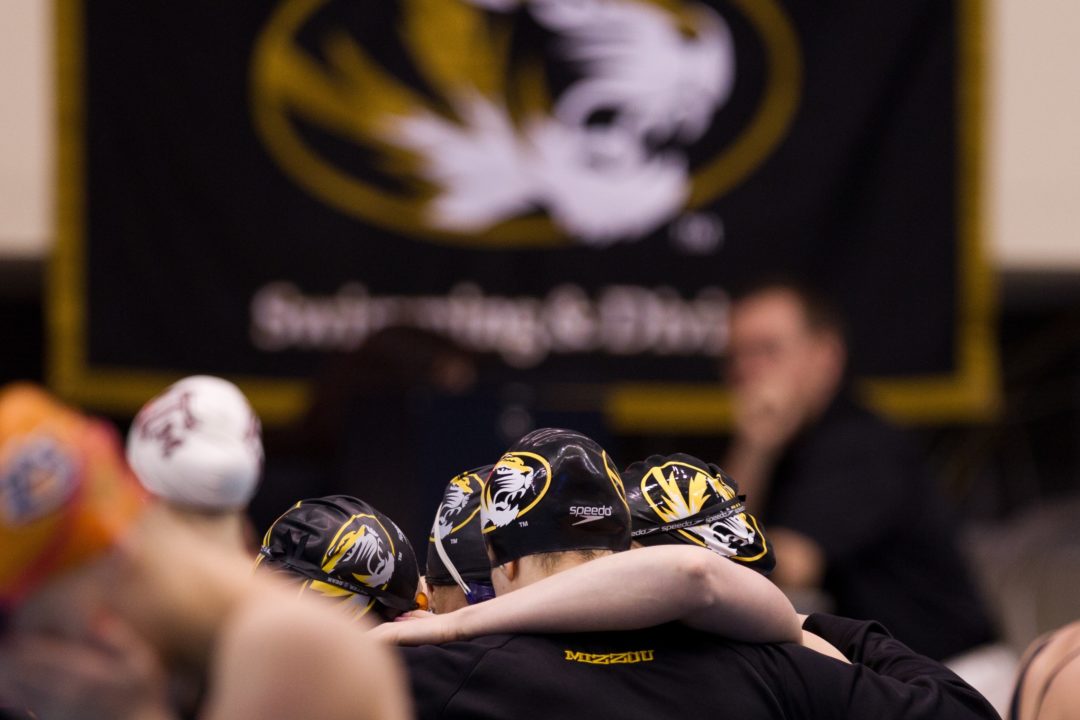 The Missouri women remained strong on Friday, with Katharine Ross becoming the school's first woman under one minute in the 100 yard breaststroke. Current photo via Tim Binning/TheSwimPictures.com

The Missouri women were hot again on Friday night at the 2013 Missouri Invitational, after a scorching Thursday night of competition.

They began the night with a win in the 200 medley relay with a 1:37.42. That relay consisted of Emily Doucette (25.34), Katharine Ross (27.37), Dani Barbiea (22.90), and Anna Patterson (21.81). Those last two look like they’re going to be the stars of this Missouri team for the next couple of years, especially Barbiea with that sub-23 second fly split. Only three medley relays at NCAA’s last year had sub-23 second splits, and all three of those finished in the top 5 (including National Champions Tennessee).

In the women’s 400 IM, Florida International’s Sonia Perez Arau swam a 4:09.59 to lop a full second off of her own School Record, which should seal up an NCAA invite for her. She swam at NCAA’s last year, but had to use her big taper at the Sun Belt Championship meet to do it, which meant a big addition at nationals. With this swim, she sets up to have some freedom for taper headed into NCAA’s and possibly even earn All-American honors and points for FIU.

She swam largely alone in that race; Missouri freshman Ellie Suek took 2nd in 4:16.01, though Suek kept things close early on before a 56.6 last 100 yards split from Arau pulled away for the win.

Anna Mayfield won the women’s 200 free for Arkansas in 1:47.10, pulling a mild upset over Missouri’s Anna Patterson who took 2nd in 1:47.59. Patterson was a bit better than Mayfield in this race last year, and has been swimming very well at this meet, so that will be a good confidence booster for Mayfield as the two should be battling in the B-Final (or perhaps for an A-final spot) at the SEC Championships.

Missouri junior Abby Duncan won the women’s 100 breaststroke in 59.21, out-touching freshman Katharine Ross, who broke a minute for the first time in her career on a flat-start with a 59.95, which also makes her the first Missouri Tiger to do so, giving her a new School Record. Duncan is officially swimming unattached at this meet; she was at Auburn for her first two years, and with her transfer being within the conference, she is forced to sit out this season.

That doesn’t mean that she’s not still training, however, and that’s a fantastic time for her. With three seasons to train together, she and Ross seem destined to become a serious conference force.

Arkansas’ Nikki Daniels took 3rd in the 100 breast in 1:00.27. That’s basically the same time that she was mid-season last year, where she ended her season with a 4th-place finish at NCAA’s.

The first finisher in the women’s 100 backstroke was Dani Barbiea again, as she swam to a 52.72. She was marked as an exhibition swimmer in finals, however, which means that Utah’s Traycie Swartz gets the win, officially, in 53.50.

Arkansas’ Mayfield, in a busy session that saw her swim four events, was 2nd in 53.90.

This relay is by far Missouri’s weakest, and without Anna Patterson involved they wound up 4th in 7:21.36.

The A was made up of Logan Mosley (21.30), Sam Tierney (23.79), Igor Kozlovskij (21.42), and Michael Chadwick (19.61). After trying some different lineups last season, it seems as though Missouri has settled on this as their medley, and things are really clicking for them.

West Virginia took 3rd in 1:27.97; they were competitive with the Tigers everywhere but their breaststroke. Utah was 4th in 1:28.04 on the strength of a 19.09 Nick Soedel anchor leg.

Missouri went 1-2 in the 400 IM, with junior Mack Darragh winning in 3:45.78 and Daniel Graviss taking 2nd in 3:47.14. That time for Darragh is a lifetime best – beating his 19th-place swim from last year’s NCAA Championship meet. The difference this year for Darragh is a very-much improved breaststroke leg, which he’ll need to continue working on if he hopes to score at NCAA’s this year.

The Tigers took their third win in three events on the day with a 1:35.98 in the 200 free from Eegan Groome. That just missed another lifetime best swim for the Tigers.

The Missouri men got a 4th win in a row as Igor Kozlowskij bested Sam Tierney in the men’s 100 breaststroke 53.64-53.88. The Tigers, showing off their breaststroke depth, actually had the top 5 finishers in this race, though 3rd went to post-grad Jowan Qupty in 54.14.

After splitting a 52.4 on the medley on Thursday, Tierney probably had hoped for a bit better out of this individual swim; he was 1.4 seconds slower in this meet than he was at this meet last season, though last season that was as fast as he got, and this year he’ll have designs on improving from his 7th-place finish nationally.

The Tigers’ run was ended by West Virginia’s top swimmer Bryce Bohman, who posted a 46.40. Though national rankings are a bit hard to track until the USA Swimming database is updated after this weekend’s meets, that seems to be the #2-ranked time in the country this year, behind only David Nolan’s medley relay lead-off at the UNLV Invitational.

He out-battled Missouri’s Logan Mosley in that race, leading most of the way. Mosley was 2nd in 46.80, and Missouri’s Max Grodecki took 3rd in 47.57.

In diving, Southern Illinois’ Cheri Zhang won her 2nd-straight springboard event with a 309.90 on the 1-meter, beating out Arkansas’ Kesha Naylor in 285.70.