OSU Invite Night One: Courtney Bartholomew Leads Off Relay In 50.8 100 Backstroke To Lead The Nation 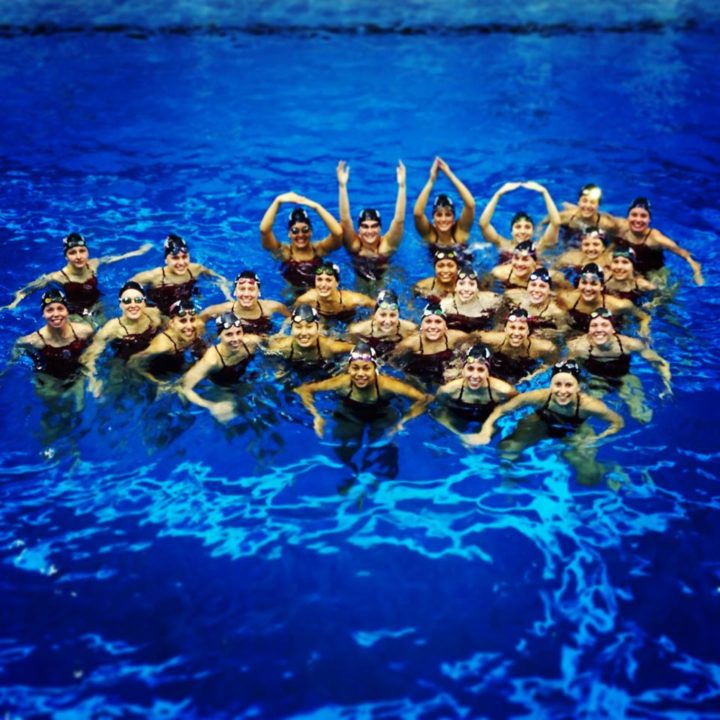 Fast time went down in Columbus on night one of the Ohio State Invitational (Photo Credit: Amanda Smith) Archive photo via Tim Binning/TheSwimPictures.com

The men and women squads from Florida, Virginia, Kentucky, plus the women from Purdue made their way to Ohio State University to compete over the next three nights at their Invitational.

Fast times were already put up tonight, with the 200 freestyle relay, 500 freestyle, 200 IM, 50 freestyle and 400 medley relay being contested tonight.

Their time also tied the meet record set by Minnesota in 2008.

Freshman Leah Smith from Virginia punched her ticket to Minnesota in March with a 4:36.19. She lead wire-to-wire, out aggressively at 1:48 at the 200 mark. Her final time was a new University of Virginia school record.

Her teammate Carolina Kenney was second in 4:42.34. And Hanne Borgersen made it sweep for UVa in 4:42.51. Those top three times were under last years invited time to NCAAs.

Another freshman will be making their way to NCAAs. Florida’s Mitch D’Arrigo had w inning time of 4:15.04, which was also another meet record that belonged to current OSU senior Alex Miller.

Two years out of the Olympics can be a year that top international swimmer can focus into the NCAA season, and Elizabeth Beisel looks poised for a strong final year with the Gators. She came in tonight and dominated finishing in a A time of 1:54.59 (meet record).

Her breaststroke split was solid at 33.69. While Beisel has struggled a bit in this short IM race, this may be her year for this event in addition to repeating in the 400 IM.

Another Florida Gator finished in an A standard, with Marcin Cieslak winning in yet another meet record of 1:42.69. He was just .06 away from Ryan Lochte’s pool record set at short course Nationals in 2010.

Eduardo Solaeche-Gomez was second for the Gators in 1:43.90.

Ohio State finished fourth and fifth with Steven Zimmerman at 1:45.84 and Tamas Gercsak at 1:46.04. Both were lifetime bests for those Buckeyes.

Natalie Hinds had quite a freshman career. After splitting sub 21 on the relay, she came back here in the individual 50 to finish in 22.27. She tied with her senior teammate Ellese Zalewski.

Mercer from Purdue tied her lead off time from earlier in the meet for third, 22.70.Fellow Big Ten competitor Michelle Williams from Ohio State was fourth at 22.82 – just .01 off her prelims time of 22.81.

Williams teammate Aliena Schmidtke was sixth, also under 23 at 22.99.

Ellen Thomas was 22.97 for the Cavaliers. Her teammate Emily Llyod from Virginia was 22.95 this morning, but finished 23.11 tonight for 7th.

Senior Bradley deBorde broke his own meet record from last year with a winning time of 19.48.

Ohio State has a gem in the works with freshman Josh Fleagle. He swam under the 20 second mark, at 19.93 – exactly the same time he hit in prelims, for second place. 19.93 was a personal best for Fleagle, and also the third time her swam sub 20 for the day.

Eric Bruck from Kentucky was 19.92 in prelims, but finished in 20.00 tonight for third.

The real headliner of the night came from Virginia’s Courtney Bartholomew. She led off her relay in 50.80 – yes, you read that right. That is obviously the top time in the country, and that is before she has swum it in the individual 100 backstroke race. That is crazy fast.

Virginia was second in 3:32.07 with Bartholomew, Laura Simon– 1:00.33, Ellen Williamson– 51.87, and Emily Lloyd– 49.07 (note that the live results had the A and B relay orders switched for the two teams). If UVa can keep improve their breaststroke and get a sub 49 split on the end, this relay could be dangerous by March. This relay was a new team record for UVa.

Ohio State suffered an unfortunate DQ in this race. Their overall time would have been around the 3:38 mark.

Kentucky’s relay finished fourth, with a notable split from their butterfly swimmer Tina Bechtel. She split 51.79 tonight on the relay. Mercer from Purdue anchored home in 48.52 on her team’s relay, which was the second fastest freestyle split of the night.

Ohio State A relay was third, C relay fourth, and B relay in 6th – all at 3:11.85. There is probably no other team in the nation that can produce three relays at 311 (that’s under the B standard).

On the C relay for the Buckeyes, Connor McDonald had the fastest 100 backstroke lead off of the night at 47.06, a lifetime best. And on the A relay, Josh Fleagle anchored in 42.88, previewing us to another great sprint race between himself and deBorde.

It was not Courtney Bartholomew leading off the relay, check the results – it was Charlotte Clark who lead off in 50.8

Wahoofan – the Virginia SID tells us that the lineups for the A and B relays were switched in results, so that’s what we’re reporting. If we hear differently we will correct, but were confident it was Bartholomew who swam the 50.80.

correction – the results indicate Clarke, but the virginiasports.com web page notes that was an error, it was Bartholomew

Something must have gotten mixed-up in the entries, because if you go to these UVa results:

you will see which group of ladies actually got credited with the results. Excellent results from both relays though. This is a really exciting meet so far!