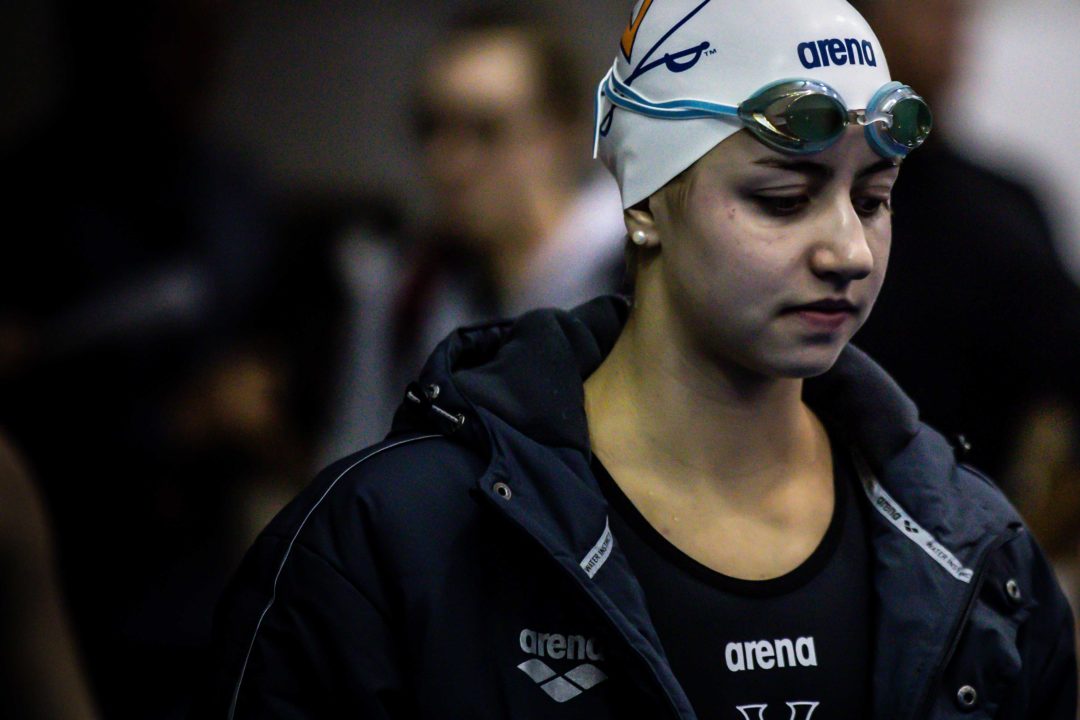 University of Virginia sophomore Kate Douglass, one of the most versatile women’s collegiate swimmers in a generation, will swim the 50 free, 100 fly, and 100 free individually at the NCAA Championship meet.

This means, among other races, she’s skipping out on the 200 IM and the 200 breaststroke.

Douglass ended the regular season as the NCAA’s top-ranked swimmer in 4 races: the 50 free, 100 free, 200 IM, and 200 breaststroke. She is the #2 ranked swimmer in the 100 fly, though in that race she was behind the fastest to ever swim the event Maggie MacNeil.

By opting for the sprint freestyles, she does give the Cavaliers extra swims in races where they are otherwise thin. Their next-best swimmer in the 50 and 100 free is Lexi Cuomo, who is seeded 15th in the 50 free and 22nd in 48.52.

On paper, Virginia’s only real challenge is to “swim well,” because if they do, and avoid disqualifications, they’ll win the meet. That being said, with swimmers like Izzy Ivey and Maggie MacNeil lurking, the 100 free looks a little murkier than the 200 breast, where even a mid-season time would have Douglass as the top seed by almost a second.

As for Walsh, another versatile swimmer, her 3rd entry in the meet is a bit of a surprise: the 200 free.

That’s as compared to the 100 breaststroke that she swam instead on the third day of the ACC Championships.

The 200 IM was a given for her as the top seed, but Walsh has also made a swap for her day 4 event: she swam the 200 back at the ACC Championships, but the 200 backstroke will be her NCAA Championship event.

We know Walsh’s potential is better than that, though. She split 1:43.19 on a rolling-start on an 800 free relay at ACCs. That puts her somewhere around a top-8 or top-9 spot in that event if we extrapolate for the difference in starts.

Like Douglass, Walsh had a lot of options. Afterall, she’s a member of the USA Swimming National Team in the 200 backstroke, even though she’s focusing on the 200 breast at NCAAs.

Interesting strategy. They are really going for the win

A little disappointing we’re not going to see what she could have done in the 200IM, but understandable. She can always set that record at a midseason meet, but NCAAs roll around just once a year, and the team comes first. That 200 breast record also seems within her grasp; but we’ll have to wait for that one, too. Of the three events she’s swimming, the 100 fly record seems the most attainable, but she’s not even the favorite there, MacNeil has to be considered that.

We will see if Kate can hang on at the end. MacNeils turns are just insane. Would love to see Maggie and Kate battle in ISL in the future

Understandable, but oh so frustrating.
UVA’s highest-ever finish at NCAAs is 5th (the Courtney Bartholomew / Leah Smith teams of 2015-16). The chance at an NCAA title is something as a team you don’t mess around with.
But for fans, we’d get to see Douglass swim the relays anyways, and she’s not close to NCAA records compared to her 200 IM / BR. If she were being selfish, I think 2 IM and both breaststrokes would be easiest route to 3 titles (dodge MacNeil and you know she’s got a good 100 br). But really, just going 1:49 in the IM would be HUGE. This is the curse of being on a team with ludicrously good breaststrokers!