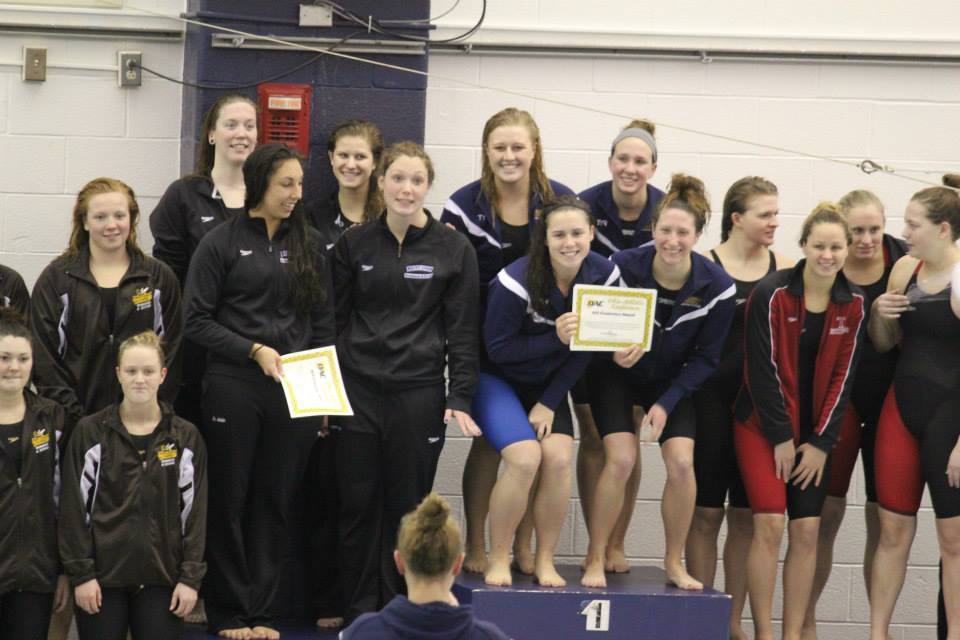 Courtesy of Lindsey Fano, a SwimSwam Intern. Follow: @lindseyfano If you had asked Megan Hawk where she was going to college,...

If you had asked Megan Hawk where she was going to college, the chances of John Carroll University being her response was slim to none. Hawk, a native of Fremont, Ohio, wanted nothing to do with the school or its swimming program because her dad, Hal Hawk (’81), swam there.

“I told everyone there was no way I was going to JCU,” Hawk says. “I didn’t want to come here just because my dad went here and I didn’t want it to seem like I was following him.”

Brian Hulseman had similar sentiments. Like Hawk, his father, Paul, graduated and swam for John Carroll.

“I’ve always grown up with JCU in my life,” Hulseman says. “Because of that I knew it was a beautiful campus with an excellent academic program but I didn’t think it was the school for me.”

While their children seemed reluctant to follow in their footsteps, Hal Hawk and Paul Hulseman know firsthand the great experience of swimming at JCU.

As a member of the 1981 graduating class, Hal Hawk, came to JCU after his former high school coach, Ron Zwierlein, started a swim team on campus. In the first few years of the program, Zwierlein went from dorm to dorm knocking on doors and asking people if they could swim. The all-male team was a bit of a mishmash team- made up of mostly walk-ons. While there wasn’t a women’s conference until 1985, some women practiced and competed with the men and then went on to compete at NCAA nationals for women.

Paul Hulseman looked at JCU after hearing about it from his high school’s Assistant Dean whose daughter swam for the University. For Hulseman- who wanted a Jesuit school with a business school and swim team- JCU was a perfect fit.

Even in the 1980’s, swim team training trips to Florida were the thing to do. Without any team money, JCU swimmers piled into a van and drove down south to get in some winter training. The team stayed in tents, practiced twice a day and had dry-lands on the beach every day.

“It was a lot of laughs, even today,” Hawk says.

Zwierlein’s odd assortment of swimmers soon began to grow and get better. Hard work began to pay off. By 1981, Hulseman and three other swimmers set the 800 freestyle NCAA record that stood for the next 29 years. The team also tied Kenyon in a dual meet, won the University of Notre Dame relay meet, and sent multiple swimmers and divers to compete at NCAA nationals. Success continued and the John Carroll swim team eventually beat the defending Presidential Athletic Conference champions, Allegheny College, in 1981.

While being on a winning team is always fun, both Hawk and Hulseman agree that the best memories come from the team camaraderie. Like any swimmer knows, the bonds formed with other swimmers are lifelong.

“My best friends and some of my most cherished moments came from the swim team,” Hawk says.

Even though at the beginning of the college search process both Megan and Brian were determined not to follow in their dads’ footsteps, they ended up on JCU’s campus, swimming for the team their parents loved so much. Megan says her dad had no influence on her choice and Brian likes to claim he made the decision for himself not his dad.

Since their dads have graduated, a lot has changed in the program- the coaching staff, the pool, the size of the team. The program has matured from a start-up program to a stronger, championship-orientated team. But at the same time, a lot still remains the same- the friendships, memories and hard work are still a big part of being on the JCU team. Both Brian and Megan agree.

“I think of the swim team as my family,” Brian says. “Everyone is accepting. I think that’s how teams should be.”

The John Carroll program continues to grow. This year’s freshman class of 13 is the largest in head coach Mark Fino’s career and this season the women’s team went undefeated in their conference. A conference championship is in the plans for the near future.

College swimming doesn’t last forever. After four short years, the ride comes to a screeching halt and all that’s left is memories. Through their children swimming on the JCU team, Paul Hulseman and Hal Hawk have another way to re-live the glory days and an opportunity to make new memories. It is a special thing when families can share the deep bonds of a college swim team.

Great story. I swam with these guys– I was part of that 800 free relay. I am afraid that relay merely set the school rather than ncaa record. I don’t think we managed to tie kenyon either (if we did, it was a gift). We did beat Notre Dame in the t relay meet and the conference championship win over allegheny was epic. Hi to Hal, Paul & coach Zwierlein.

I was there — and still am — cheering them on!

Megan, congrats on a super year not only in the pool but also in the classroom, so proud.Art Bucci Hal’s high school coach at Fremont Ross.