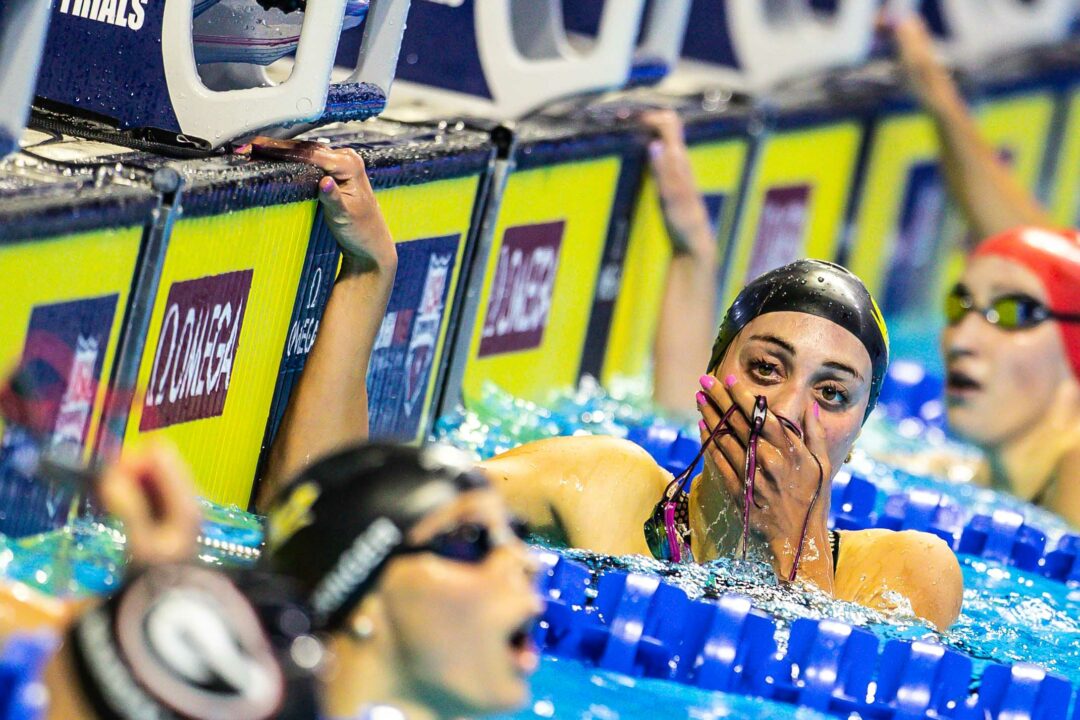 Roughly 35% of swimmers improved their meet seed times on day one in Omaha as two American records fell and five 2021 Olympians were named. Current photo via Jack Spitser/Spitser Photography

So, we know that yesterday was fast, but was everyone else just as fast? Taking a look at how many swimmers bested their meet seed in prelims on the left table, roughly 30% of swimmers saw improvements, including Andrew’s 58.19 breast. Of note, only 7 women out-swam their 400 IM meet seeds while nearly half of the 49 men’s 100 breast seeds saw morning drops.

Later on in the evening, at least one more swimmer in each event improved their meet seeds, including four women’s 400 IM finalists. In the women’s 100 fly, four more swimmers got under their meet seed, including newly-minted American record-holder Huske and No. 4 seed Kate Douglass (57.07). With this, an additional 5% of qualified swimmers improved during semifinals/finals on Sunday evening.

At the Wave I meet, only 18% of swimmers improved upon their meet entry times.

If the most elite swimmers in the country can just unexpectedly “miss their taper” then maybe we have to reconsider traditional swim training. I promise you USRPT swimmers knew how fast they would go coming into this meet. Why beat your body up for 2 years when there is a 65% chance your taper won’t work when it comes?

People can train however they want. If they want to do USRPT there is plenty of opportunity for them to do it.

Agreed. And it works for some people. I guess I’m just a bitter swimmer who missed his taper too many times in college. 😂

I feel that lol

I don’t know the taper seem to helped fly better than breaststroke for me as a kid.

A little risky to say after day 1 that Jay and Hali made the team (they probably will) because there are 36 selection positions but only 26 spots. But if there are not enough doubles I think it is the 6th place finishers in the 100 & 200 free that are the first swimmers out.
If Dressel makes it in the 50 & 100 free and the 100 fly he occupies 3 out of the 36 positions but only 1 out of the 26 spots.

ledecky should help on the womens side right?

How does this compare to previous trials? I think most people expected a lot of variability due to the past year, just curious if this is an extreme outlier. Obviously we won’t have a complete picture until Wave 2 is complete and then you get the joy of combining both waves to get the full picture of how this trials stacks up to previous ones. Certainly going to be interesting

Typically it is closer to what wave 1 did. You have to understand that virtually all of these swimmers achieved their entry time in a finals situation likely in contention to win the race they were in. Now they are being measured in a prelims swim in a high tension environment. If everyone got a second swim the best time percentage would go up dramatically.