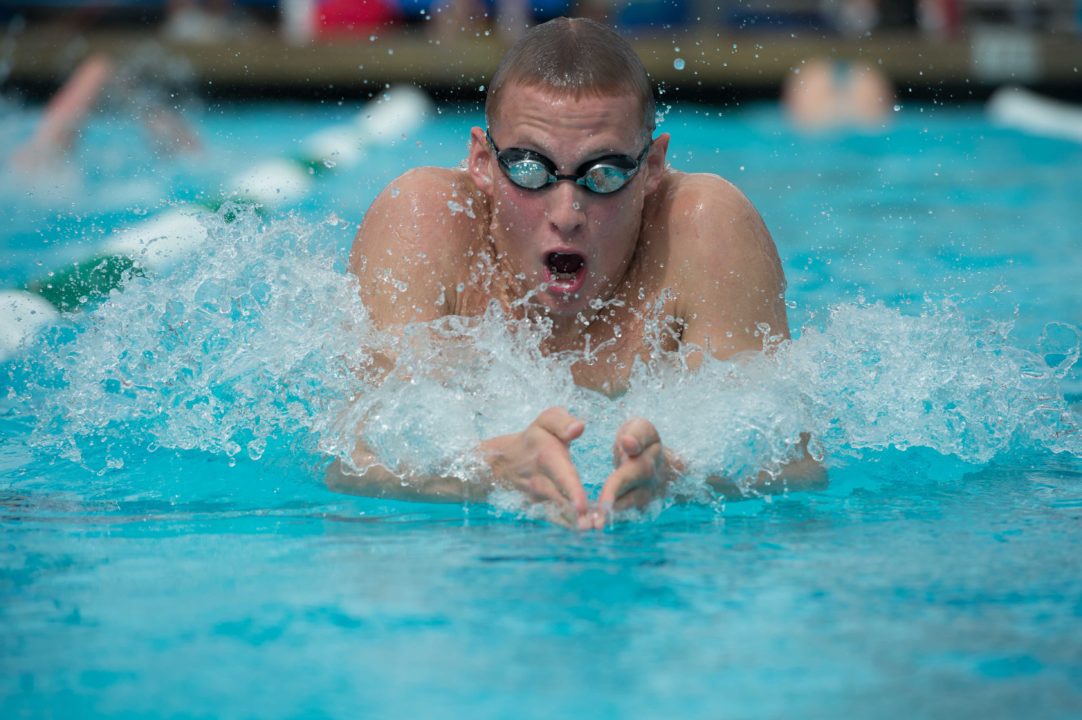 Alec Page, who recently was removed from the Canadian Commonwealth Games and Pan Pac roster due to a doping violation, was able to shed some light in what must've been a tough turn of events for him with a win in the 400m IM here in Saskatoon. Page was a 4:20.11 here, slower than he was at trials. Archive photo via Mike Lewis/Ola Vista Photography

Saskatoon, SK. played host to some of Canada’s best as day two of the Canadian summer nationals went underway tonight. With the absence of the top swimmers in Canada who are preparing for the Commonwealth Games, some of the younger talent got a chance to step into the spotlight and shine.

Kicking off the night was Caroline Lapierre-Lemire with a 55.93 in the 100m freestyle. Lapierre-Lemire was able to take down Ariana Mainville who finished in 56.18 and Toronto Swim Club’s Paige Shultz who rounded out the top three in 56.20. The race showed the growing depth of Canadian freestyle was Fionnuala Pierse and Hannah Riordan were both within that same timeframe swimming 56.47 and 56.50 respectively. Out of the top three Lapierre-Lemire was the only swimmer to place in the top eight in this event at Canadian trials back in April.

The men’s 100m freestyle looked like a rematch of last night’s brilliant 200m freestyle final, which featured up-and-coming Canadian freestyle stars Jeremy Bagshaw and Stefan Milosevic. Last night Bagshaw came out on top of Milosevic in what was one of the greatest races of the night, beating him by over a full second. Tonight, Milosevic significantly cut the gap although ultimately falling to Bagshaw 50.49 to 50.60. Also with the two of them was Etobicoke’s Hassaan Abdel-Khalik who grabbed the bronze in 50.82.

Worth a mention was also 16-year-old Javier Acevedo who finished fourth in 51.09.

After winning the 200m breaststroke last night, Ashley McGregor knew that she’d have her hands full with Fiona Doyle in the 100. McGregor, known more for her 200, finished third tonight in 1:09.51 failing to keep up with the speed that was Doyle and Rachel Nicol. Doyle managed to win the race in 1:08.81 just barely holding off Nicol who was over a second behind her at the 50, but managed to catch up and finish just behind her in 1:08.89.

Sergey Holson and Antoine Bujold went into the first 50 of the 100m breaststroke fairly even and carried their positioning throughout the entirety of the race. Holson managed to move out in front of Bujold just enough to secure him a win in 1:02.53. Bujold settled for silver in 1:02.76. Third was Matthew Ackman in 1:02.83. Ackman was ahead of both Holson and Bujold at the first wall but couldn’t manage to hold on.

Mary-Sophie Harvey took home gold in the women’s 400m IM with a time of 4:50.79 over Samantha Harding. Harding was ahead of her after the breaststroke leg, but Harvey threw down a 1:05.18 freestyle split to give her the win. Harding finished second in 4:51.39 ahead of Vanessa Treasure who trailed behind in 4:51.96.

Alec Page, who recently was removed from the Canadian Commonwealth Games and Pan Pac roster due to a doping violation, was able to shed some light in what must’ve been a tough turn of events for him with a win in the 400m IM here in Saskatoon. Page was a 4:20.11 here, slower than he was at trials. Second was Etobicoke Swim Club’s Tristan Cote in 4:26.13 followed by Hochan Ryu from the J-Dolphins Swim School in 4:27.41.

In the men’s 50m backstroke Jeffrey Swanston finally got to come out on top of his brother, bringing home a national title in 26.05. Second was  Kyle Haas in 26.32 followed by Swanston’s brother, Matthew Swanston in 26.36. That gave the Newmarket Stingrays two swimmers on the podium in that event tonight.