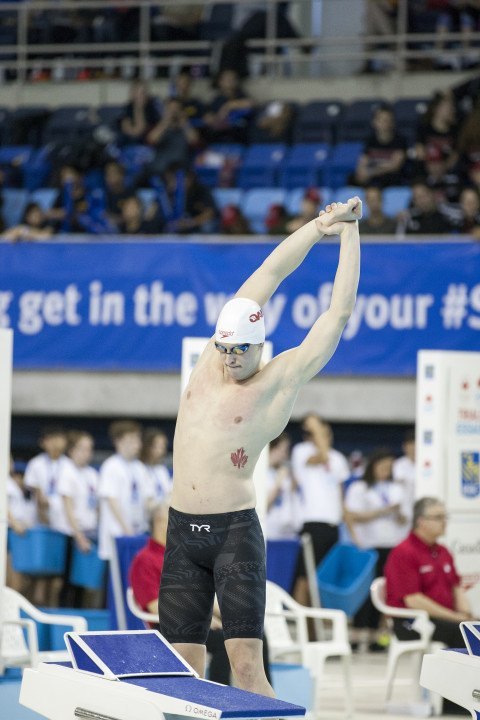 Both Jason Block and Mack Darragh were added to the Canadian Olympic roster after it was announced by FINA on May 31st that Canada's men's 4x100m medley relay had qualified for the Olympic Games. Archive photo via Chris Tanouye/www.christanouye.com

Both Jason Block and Mack Darragh were added to the Canadian Olympic roster after it was announced by FINA on May 31st that Canada’s men’s 4x100m medley relay had qualified for the Olympic Games.

Block won the 100m breaststroke at Canadian Trials in April while Darragh won the 100m butterfly, but because the two didn’t meet the FINA ‘A’ standard, Canada didn’t add them to the team for individual events.

Block, who formerly trained at Calgary before moving to the United States, won the 100m breaststroke with a 1:00.59 to finish just 0.02 seconds off the standard.

With the two swimmers added to the roster, the Canadian men’s 4x100m medley relay team is set for Rio. Javier Acevedo, who broke the world junior record at Canadian trials in the 100m backstroke, will be leading things off followed by Block, Darragh, and Santo Condorelli.

Below is the updated Canadian Olympic roster.

Hmmm. I feel like Canada would have a better medley relay going Condorelli fly and Kisil free given Santo’s sub-52 last weekend. But, I’m a Mizzou swimming fan so I would be happy to see Darragh up there.

Congrats to Jason Block as this nomination was well deserved from all his hard work! From someone that has trained with him for years and knows him well, couldn’t ask for a better person to represent Canada at the Rio games!

My only dispute is that Canada should have nominated these 2 swimmers in April at the trials since they could take these swimmers anyway since no one was blocking them to round out their roster even though I understand why they waited until they officially found out their relay made the FINA qualifying at the end of May.

I see so many familiar names in the Canadian Olympics roster. How many of those swam for colleges in USA?
Strange, because I used to believe that swimming for US colleges put them at disadvantage!

We worked directly with Van Landeghem (Georgia), Nicol (SMU), Goss (Indiana) and Darragh (Missouri) with the recruiting process through American College Connection. I think more U.S. coaches are working WITH the Canadian coaches in trying to help these kids. These are 4 outstanding Student-Athletes.

I’ve heard so many parents here in Canada disparage the U.S. collegiate system without facts. My swimmer is heading to the States and we’re looking forward to the opportunity for her. Swimming is swimming — you find the right fit (coach, program, teammates, academics) and the swimmer shines.

Is there any chance for these guys to also swim the 100 breast (Block) and 100/200 fly (Darragh)? After all, they’re on the team now and have made the B qualifying times, at least.

Fina rules allow 1 swimmer per event if they have a B time. 2 swimmers if both have an “A” time. If Condorelli swims 100 fly, Darragh can’t. If Condorelli doesn’t swim it, Block can.

^ I think you meant “Darragh can” at the end.

Yes, I realized that Condorelli’s DQ at the Trials complicates things. However, Darragh’s addition to the team is being justified by his addition to the relay. If Canada was going to allow Condorelli to swim the 100 fly at Rio it would stand to reason that they would also put him on the fly leg for the relay. Canada is probably going to go strictly by the books on this one, even though that is not likely to give them the best possible team. I think John Anderson has painted himself in a corner. He’s been heavily criticized in the past for allowing team selection to be governed by convoluted… Read more »

Catherine – the difference between the Kierra Smith situation and the Condorelli situation is that Condorelli doesn’t have an A time at any FINA-approved Olympic qualifying meet. So, they can reinstate him in the event, but they can’t reinstate his finish time. Kierra Smith would’ve had a FINA “A” time at another meet, so there wouldn’t have been this issue of “A” times versus “B” times. Indianapolis was not an approved Olympic qualifying event, though it seemed like it should have been.

Also, at Worlds last year…apparently FINA was only using the qualification times and rules for “funsies,” and they didn’t really mean anything. With the IOC watching, they’ll have to be much more strictly adhered to, one would assume.

Braden, thanks for the clarification and for the laugh about FINA using Q times for “funsies” at Worlds. That might explain why Mexico falsified entry times for Worlds. But didn’t they get sanctioned for that, and would that have been the case if the rules were just for “funsies”?

Mexico received sanction for not paying the fine for withdrawing as the host of 2017 world championships.

FINA is only interested when money is involved. Doping or Qualifications times be damned. But, Braden explained, they’ll be forced by IOC to play by the rule for the Olympics, especially since it’s concerning the number of participating athletes.

FINA said they weren’t concerned about the falsification of entry times. The sanction was all about pulling out of Worlds hosting duties in 2017 and not paying the fee in their contract to do so.

I guess I should have phrased that as “Will these guys be allowed to swim their individual events now that they have made the team?”. I realize that FINA would allow this, but will the Canadians actually put them in these events?

Mack Darragh is the question mark for me of what he will swim (or what Canada enters him in) as I can see him swimming the 200 fly individually, but as stated above, Santo Condorelli is the faster option on the medley relay in the fly and just broke the Canadian record… Read more »

I get your reasoning on Darragh and don’t necessarily disagree, but as I said above, Darragh’s addition is being justified by his addition to the relay. If Canada did as you said and put Condorelli in the 100 fly (both individually and on the medley relay) that would leave only the 200 fly for Darragh, with a ‘B’ time for entry. While that would be allowed by FINA, I can imagine that other event winners that didn’t achieve A times at the Trials would get very very angry. I’m thinking of the men’s 200/400 IM winner(s?) and the 200 backstroke/ freestyle winners. (This would all have been so much simpler if Canada had allowed all event winners to go to… Read more »