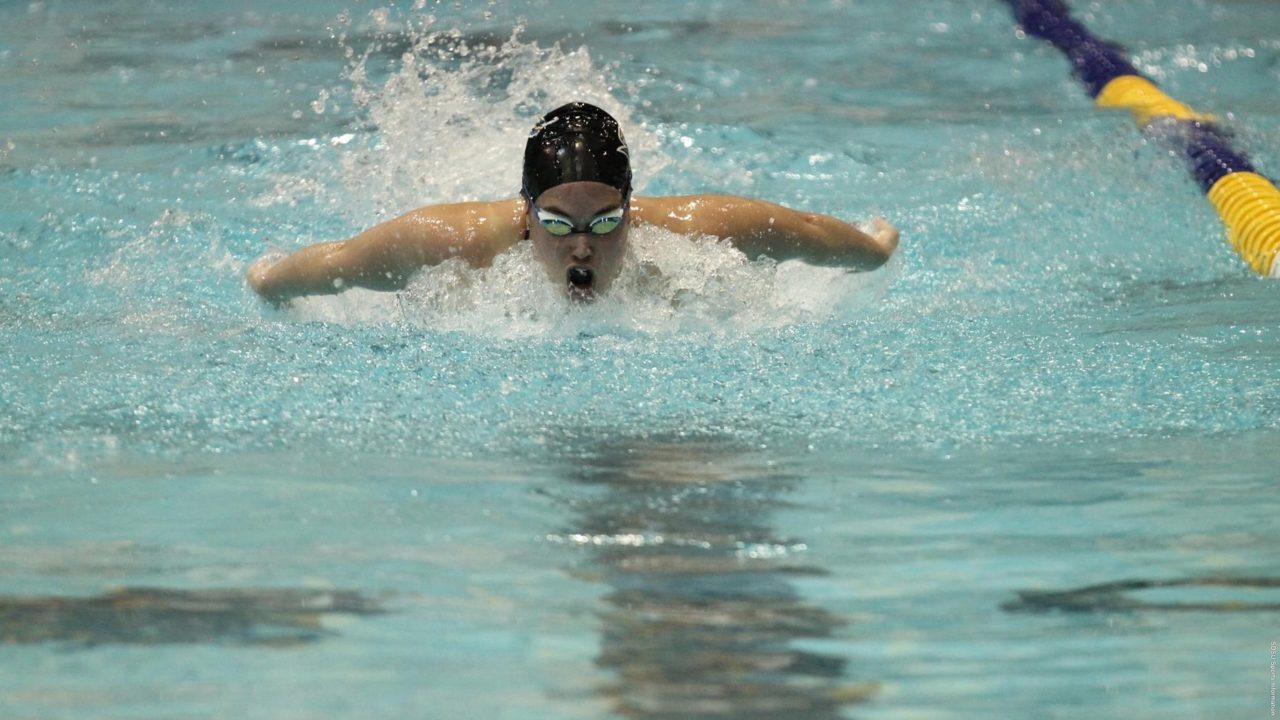 SIOUX FALLS – Performing at a high level has been the identifying characteristic of the University of Sioux Falls Swimming Team, which opened the Sioux Falls Invite, hosted by Augustana at the Midco Aquatic Center, with another memorable performance. Day two of the Invite begins with prelims Friday morning.

On the opening day of the Invite, the Cougars broke school records and had a number of NCAA B cuts. Along the way, they outpointed two DI programs in University South Dakota and South Dakota State University in swimming points. USF ranks third overall in total points but when counting swimming events only USF leads with 396 points with USF at 382 and SDSU at 373.5. When including diving, SDSU has a 450.5 point total for first place with USF at 439 and the Cougars in third at 396. Augustana is fourth with 265 points while U-Mary has 202.5, Iowa Central CC at 52, College of St. Mary, 45; and Iowa Lakes CC at 16.

“I am really proud of this team,” said USF Head Coach Chris Hamstra. “We are really competing at a high level and it is great to see us continue to perform at a high level,” he said.

Two-time NSIC Athlete of the Week Ella Johnson, a sophomore from Southport, England continued to turn out top times nationally. She won an individual event and was part of two winning relays. In the 100 fly, she registered an NCAA “B” cut with a school record mark of 54.29, which is also the top time in NCAA DII. She now has the top time in the 100 fly and the 200 fly. Also in the 100 fly, Childs was 5th in 56.94 while Ursula Demarquet was 10th in 58.49.

Johnson was part of the 200 medley relay which has an automatic NCAA cut by clocking a 1:43.02 in winning the event. On the relay with Johnson was Elizabeth Spaans, Chantal Kasch, and Jenna Krahn, who have qualified for DII nationals. USF was also fourth place in the relay with a team of Gigi Bario, Abigail Ford, Valerie Childs and Leah Eagleton, who clocked a 1:46.29.

Among the school records is the 800 free relay which won a title by clocking a 7:33.80. The team included Elizabeth Spaans, Leah Eagleton, Ella Johnson and Guila Marcon. USF was also fifth in the event with a relay of Jenna Krahn, Valerie Childs, Evelyn VanDeMark and Abigail Ford in 7:47.69.

“What a good start to weekend,” said head coach Doug Humphrey. “We are picking up where we ended last season, but even better. We had several season bests, many lifetime best and ended the day with three school records broken. I am excited to see what we can achieve tomorrow.”

Elisabeth Timmer broke the 50 free school record with a swim of 23.28 during prelims, passing Abby Zenner who had previously set the record at 23.34 in 2016.

Kristen Davis swam a record 55.82 during prelims in the 100 Fly before immediately resetting her own record in the finals with a swim of 55.65, placing second in the event.

Men
The Jacks finished four of the top-five in the 500 free with Damon Venner pacing the team in second-place (4:38.25). Venner also swam his career-best in the event during prelims with a time of 4:35.07.

The 800 free relay wrapped up day one, seeing both the men and women take second in the event. The women’s ‘A’ team (Timmer, Pincus, Daniela Santillan, Maria Currie) swam a 7:37.73 while the men (Watkins, Stikeleather, Alex Kraft, Miller) posted a 6:52.66.

Up Next
The Jacks return to the pool Friday for day two of the event. Prelims start at 10 a.m. with finals beginning at 5 p.m.

SIOUX FALLS, S.D. – The College of Saint Mary swim team will be pushed this week.

The Flames are competing in the three-day Augustana Invitational in Sioux Falls, S.D. The meet has six sessions with morning prelims and evening finals all three days.

Results were not available yet Thursday evening, but CSM Interim Head Coach Terri Hermes said the Flames had a good day.

“The Flames were a little rough after an early start from Omaha and a three-hour drive, but they pulled it together,” Hermes said. “Kailee Sunada (SO/Colorado Springs, Colo.), while not completely healed, controlled her 500 free and was slightly off her times for this event and her 100 fly. Freshman Abbey Craig (FR/Omaha, Neb.) now knows what to expect when traveling and getting right into a long race – the 500 free. We have a bright future ahead with these tough ladies.

Hermes said the Flames were ready to go by the time the finals were underway.

“Our 200 medley relay started finals tonight,” Hermes said. “The Flames were seeded well, but not quite up to the speed of some of the teams at this invite. Emily went slightly slower in her 100 fly with a 58.26 and finished second in the consolation heat.

“Our 800 free relay was the last event of finals tonight. It was the first time this season for the Flames to swim this event. Abbey Craig, Kirsten Aken, Kailee Sunada and Emily Jacobson did a very nice job after a long day truly attacking their swims in the relay.

Competition continues Friday with prelims starting at 10 a.m. and finals at 5 p.m.