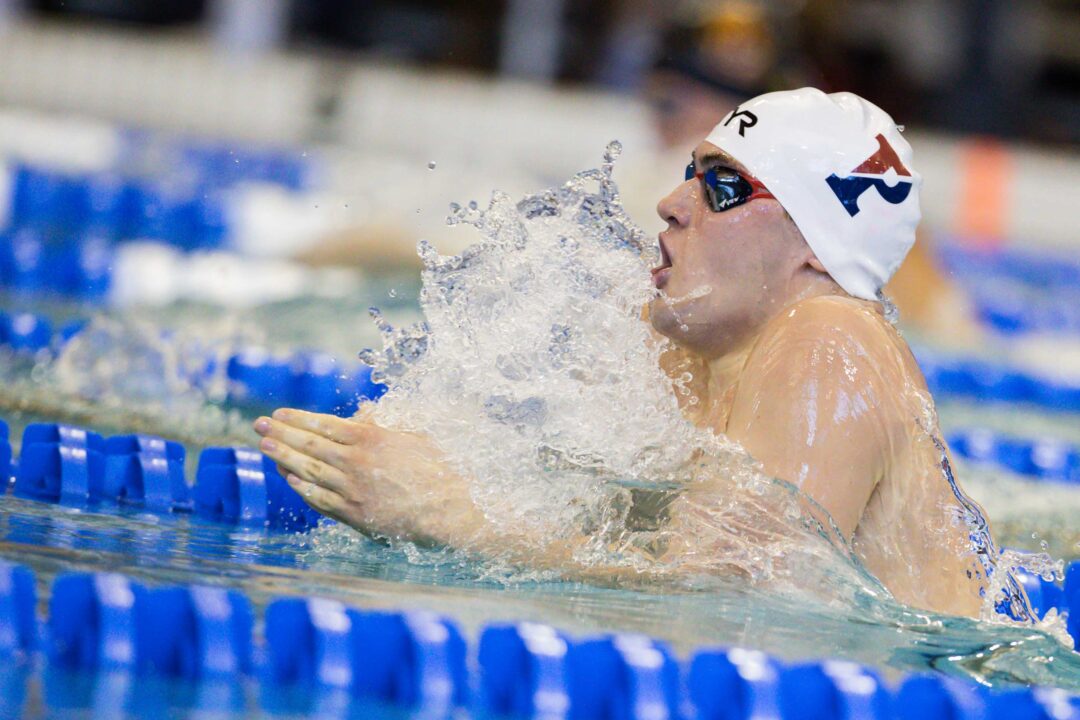 Penn's Matt Fallon, who finished 3rd in the 200 breast, was one of a slew of Ivy League swimmers smashing records at NCAAs this week. Current photo via Jack Spitser/Spitser Photography

The Ivy League has long had a strong swimming tradition, with former US Olympians like Bobby Hackett, David Berkoff and Nelson Diebel, among others, having all called the Ivy League home. On a team level, Yale was a historic powerhouse under legendary coach Robert Kiphuth, winning four NCAA team titles between 1942 and 1953.

That distinction goes to Penn freshman Matt Fallon, who finished third in the 200 breast in 1:49.16. In the prelims, Fallon broke his own Ivy League record with a 1:49.03, securing him the top seed heading into the final. Fallon also finished in 10th in the 100 breast in 51.57, just off of Alex Evdokimov‘s Ivy League Record..

Despite not breaking any Ivy League records, his teammate Dean Farris had a solid meet despite falling short of his lofty 2019 heights, which included 2 individual titles and setting an American Record in the 200 free. Farris finished 7th in the 100 back in 44.68 and 9th in the 100 free in 41.42. He also played a crucial role on all five of the Crimson relays, which contributed massively to the Crimson’s 13th place team finish.

I think Matt Fallon deserves an “in this story” circle at this point!

What can Brown do for you?

No qualifiers for Brown. I think their closest was a 1:53.70 breaststroker

Brown is really not the place for swimming … and I say this as a Brown alum.

Why…I’m thinking about going there…

If you want an education you go Ivy. If you have aspirations to be a d1 competitive athlete think hard. Just ask the Dartmouth swim team and ask why no swimming in the Ivy League last year.

What Oldswimdad said. Though nothing but good things to say about the quality of the academics and of the students that attend.

Columbia also had a great diver!

And a Princeton Diver also scored