ISL Playoffs – Match 3: Scrappy Centurions In The Battle For Second With Titans 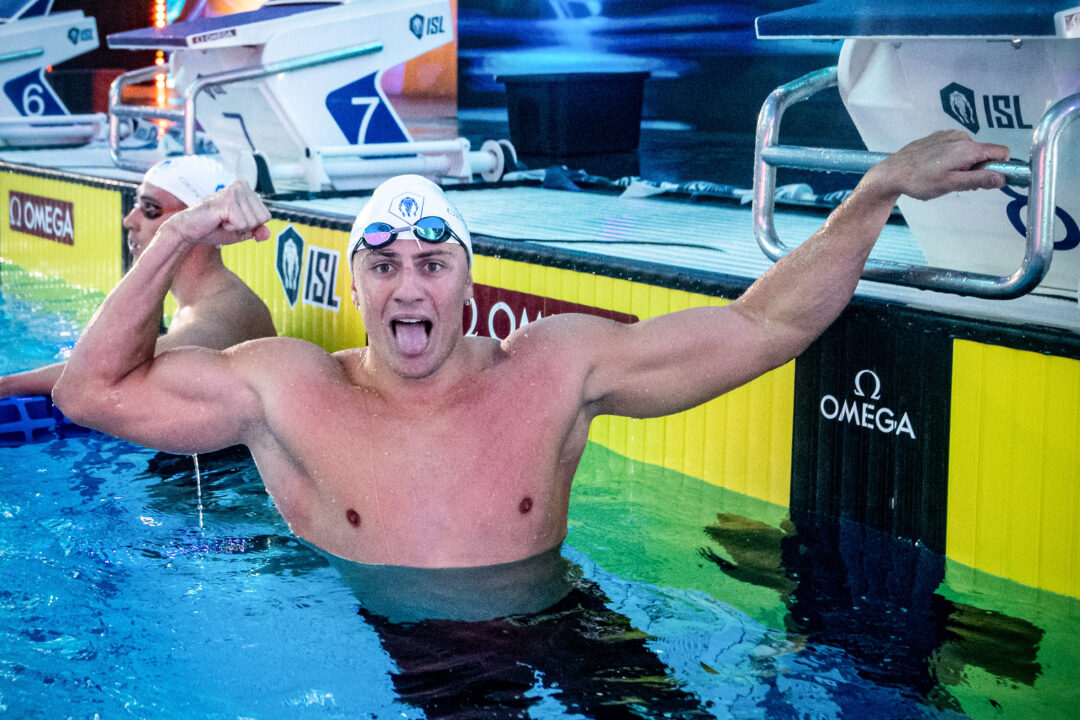 Aqua Centurion Nicolo Martinenghi had a big win in the men's 50 breast as the club finds itself right in the thick of things with Toronto for second place. Archive photo via Giorgio Scala / Deepbluemedia / Insidefoto

After finishing a distant fourth in their opening playoff match last weekend, the Aqua Centurions responded with a big showing on Day 1 of the third postseason match in Eindhoven on Thursday, entering Day 2 trailing the Toronto Titans by just 10 points for second place behind Energy Standard.

The Centurions, who trailed Toronto by 93.5 points at this point in Match 2, had some critcial performances from key swimmers despite the absence of one of their top point-getters in male sprinter Szebasztian Szabo.

The club had a big win from Matteo Rivolta early in the men’s 100 fly, breaking the Italian Record in the process, and then continued to battle over the middle portion of the day, but came out of the women’s 200 IM trailing Toronto by 32 points.

Despite the ‘B’ team getting disqualified and forgoing four points, the club came out of those three events up by 26 on Toronto—a 58-point swing in their favor.

The Titans had a strong finish to the match, while Aqua came back to go 2-4 in the men’s medley relay and exit the day with 212 points—73.5 more than a week ago.

This is a strange match. Some very fast times with records being broken, but some very slow times. I think if Roar were in this match they would be winning with their times from last weekend, even though they had a bunch of misfires last weekend.

The final might just end up being decided by which team can get their swimmers to consistently swim to their potential because there seem to be so many misfires for almost every team.

Nicolo’s got some guns on him.

If AQC had used the B anchor on the men’s medley relay they would have won!

What were the skins picks?