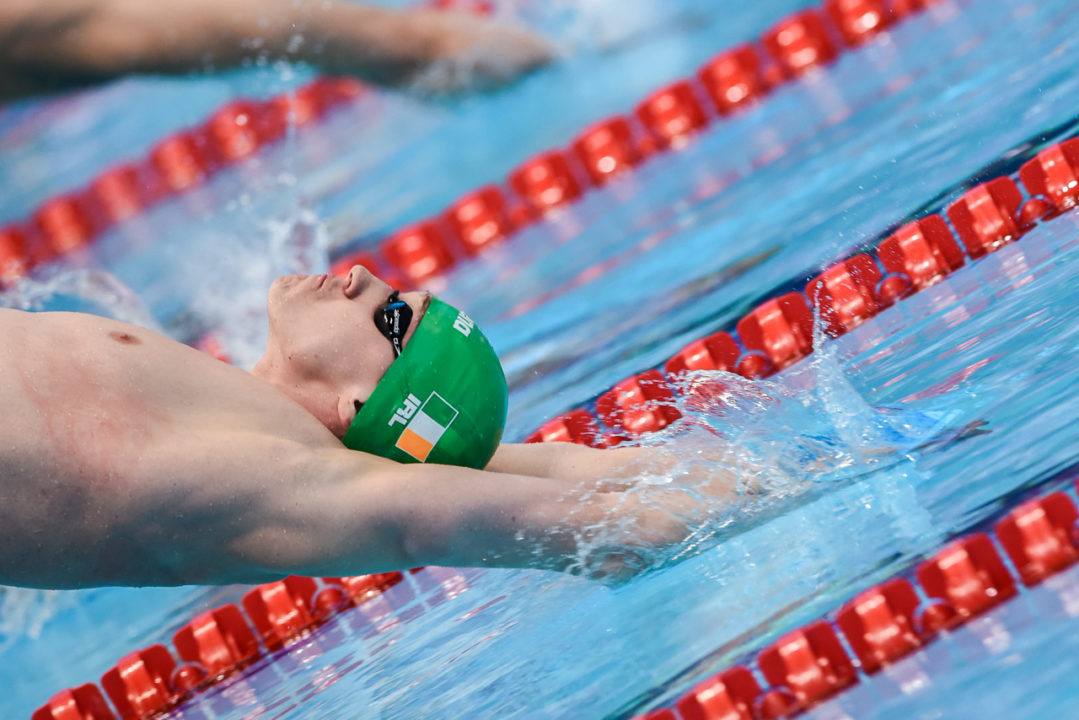 Ireland's new National Performance Director Jon Rudd says the nation will focus on keeping talented domestic athletes training in Ireland while finding athletes abroad with Irish eligibility as the nation builds towards the next Olympics. Archive photo via Peter Sukenik/www.petersukenik.com

Ireland’s new National Performance Director Jon Rudd says the nation will focus on keeping talented domestic athletes training in Ireland while finding athletes abroad with Irish eligibility as the nation builds towards the next Olympics.

That comes after Ireland’s best aquatic finishers at the Rio Olympics came from outside of the nation. American-born swimmer Shane Ryan elected to use his Irish citizenship to compete for Ireland in 2016 after trying out for the U.S. Olympic team in 2012. Ryan, whose mother and father are both of Irish descent, made semifinals of the 100 backstroke in Rio. Meanwhile diver Oliver Dingley made the 3-meter springboard final after switching his citizenship from Great Britain to Ireland. Dingley became the first Irish diver to qualify for the Olympics in 68 years and became the first Irish diver ever to make an Olympic final.

That’s not to say Rudd wants to focus entirely outside of Ireland’s borders.

“I’m conscious of the fact that my priority is right here in Ireland,” he said, “but that should not mean that we’re closed to possibilities: there are lots of folk out there who may not know they are eligible for Ireland. And if they have Irish heritage and respond to the call and culture, we should welcome them.

Rudd said his vision of Irish Swimming is to have infrastructure that entices great domestic athletes to continue training in Ireland, while also bringing in high-level athletes from outside the country with eligibility.

“I want a system where swimmers can choose to leave but don’t feel like they have to,” Rudd said. “If they want a lifestyle and cultural change by going to the US or wherever, then go for it. That’s fine – but I don’t think that’s for national medalists looking to make senior international teams in the future. We want to create a situation at the National performance centres in Dublin and Limerick where athletes get to 18 years of age and there’s a strong viable option for them to stay on shore and not to feel like by staying home they are compromising whatever potential they have.”

Mr Rudd took the exact same recruitment approach with his Leander programme. Throw in his cronie Rob Greenwood(if he actually makes it here) and we have two men hell bent on increasing their own stock at any cost.

It’s a stepping stone back to GB, nothing more….

And now Leander appointment in Steve Beckerleg as asst head coach. He has never coached outside Leander and no Irish coach was given opportunity to apply! Can’t see Greenwood making it tho – as a parent I’d have concerns

I welcome any foreign man to try usurp the throne. I’m sitting high atop this nation and no man can stop me.

Is there a form to fill in to sign up?

Hey Calum – you can email [email protected] if you’re interested.

Why do we expect an Englishman to have any pride in our nation?? He will take results from wherever he can find.. no pride in the tri colour unfortunately this is simply business.

Sounds like Jack Charlton and his “Irish” soccer team.

The Irish flag should not be worn as a second choice, but an Englishman encouraging this to improve his chances at success…..

Dear Mr Jon Rudd
I was thrilled to hear a coach of your calibre was given the task of taking Irish Swimming to a new level.
We have thousands of swimmers who work really hard and give up their lives daily in the dream of, one day, representing THEIR country at the Olympic Games or World Championships.
I was then saddened and disillusioned to see your recent comments in worldwide media basically advertising for swimmers who aren’t good enough for THEIR own countries to check for Irish Ancestry in the hope they could win you a medal or two at these competitions.
How am I supposed to tell my son that… Read more »

Your letter is fairly addressing likely the fear of many there’s no question about that but ultimately swimming is very much a minority sport in Ireland with most choosing GAA, rugby etc when perhaps many athletes would potentially be better suited to swimming (e.g. Many fast twitch athletes who would choose the “glamour” sports over the long slog staring at the black line for hours everyday). Admittedly I know very little about boxing but I’m sure there is a statistic to show the number of young people who took up the sport saw a huge boost following Katie and the others success in London. Although not ideal to have to ‘farm out’ for talent perhaps success of individuals with a… Read more »