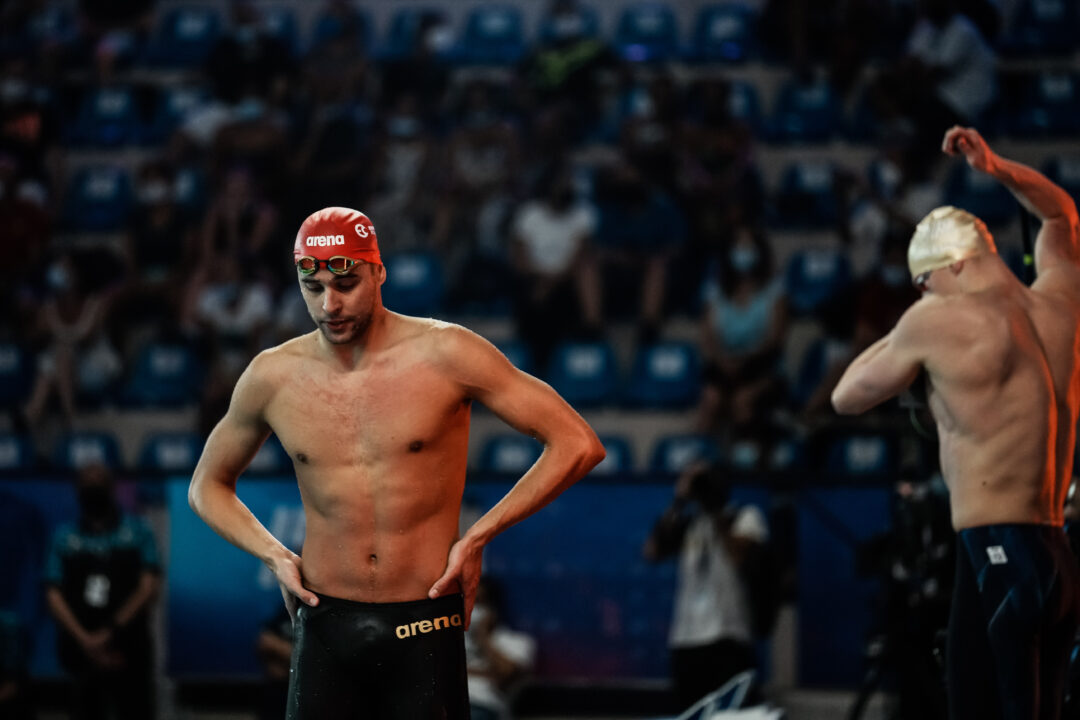 Chad Le Clos and Energy Standard won't have the opportunity to defend their 2021 Title this year as the ISL announced that Season 4 will be postponed to 2023. Stock photo via Mike Lewis/Ola Vista Photography

This post has been updated to include the letter sent to swimmers from the ISL, in addition to the letter publicly released.

The International Swimming League (ISL) has decided to cancel its 4th season that was set to begin on June 3rd. The athletes were informed via a formal letter on Sunday. The ISL had previously announced that the 24-match season would be hosted in both North America and Europe.

The ISL released the following message to SwimSwam on Sunday morning as teams prepared to notify athletes of the decision:

“The war in Ukraine is a tragedy, having destroyed lives, families and homes. Many of our ISL colleagues remain trapped in Kyiv, and the conflict seems poised to continue for the foreseeable future.

In light of this force majeure situation, we cannot, in good faith to our swimmers and our fans, commit to hosting any commercial matches in 2022. As such, we have made the difficult decision to postpone Season 4 to 2023.

Importantly, the ISL is not going away. The League still has plans to expand our Junior League, to collaborate with the Master’s swimming community, and to ensure continuity with our Clubs through non-match events.

We will come back stronger, and we thank all of you for your understanding, patience and continued support.”

SwimSwam has also obtained the letter ISL sent out to its athletes today. The letter is, of course, much longer and while the ISL’s public statement did not mention funding, the letter sent to the athletes did. Here is the transcript of that letter:

As you all know, the ISL faces a force majeure situation due to the war in Ukraine. The war has destroyed lives, families and homes. Many of our ISL colleagues remain trapped in Kyiv, and the conflict seems poised to continue for the foreseeable future.
Facing this situation, and given that most of the IL’s financing originates from Ukraine, we cannot in good faith commit to hosting any commercial matches in 2022. As such, we have made the difficult decision to postpone Season 4 to 2023.
Importantly, our first obligation remains to yourselves. This decision has been made because we recognise that we cannot ask you to travel, train and compete on a promise alone. Rather, we must settle all of the ISL’s outstanding payments to each of you before we can push forward to another Season.
In the meantime, the League will use this period to reflect, and adjust our plans moving forward. We will pursue more innovative strategies for commercialisation, embrace more frequent and transparent communication, and include consultation with the swimming community concerning our rules and our schedule as a critical part of the ISL’s process.
These steps forward will be overseen by an expanded leadership team who will not take compensation until all of you have been paid, because they truly believe in the ISL’s potential to transform our sport.
We understand this will be difficult news for many of you. However, this is necessary to secure the League’s long-term sustainability, and to break the cycle of starting a new Season whilst still being indebted to you.
The ISL is not going away. We just need some time in order to come back stronger, and we thank you for your understanding, patience and support in the meantime.
We will be in touch soon, with updates on payments and other developments in the League.
Yours,
The International Swimming League

There have been an over 21,000 deaths from the Russian invasion of Ukraine, with approximately 10 million people being displaced due to the conflict, according to the UN.

Energy Standard had gone as far as to suspend all agreements with Russian athletes and support staff after the country’s invasion of Ukraine in February.

Grigorishin has made most of his money from businesses based in Ukraine. A league spokesperson said earlier this year that the league was funded for Season 4 and that they were confident that future seasons will not be affected by “any geopolitical situations.”

Sunday’s statement made no mention of funding, though a schedule February 28 payment to athletes for season 3 was postponed because Grigorishin was unable to transfer enough funds out of Ukraine, the league said.

The ISL has struggled with payments since its inaugural season in 2019. There have been several reports of athletes not being paid their earnings, and boycotts were set to happen during the Season 3 ISL Playoffs. The ISL had announced a $13 million prize pool for Season 4 despite not paying all the athletes for their previous seasons.

This is really sad. At least it was something for the Elite swimmers to get some publicity, to travel & actually make a lil bit of money. It helped subsidize their income. I know a lot were not paid completely but most were paid slowly in multiple payments. (The Athletes spent a month in Italy, that’s pretty sweet!) Not to mention, it was people telling them, we believe in you & think what your doing is pretty fantastic! I loved the fast-paced 50’s! Thank you to the Gentlemen that started this! I hope to watch this league again, back in action!
Putin is a very evil person. I hope the Russian people see him for what he truly is,… Read more »

The competition itself was beginning to turn into a farcical circus anyway with all hose points stealing and Energy Standard winning all the time .. I just want a straight out swimming competition and less of the razzle dazzle crap

Unfortunately, the tragedy in Ukraine likely only hastened the inevitable.

Poop. Now how am I going to get my fix of watching elite swimming when most events aren’t accessible for viewing in New Zealand.

As soon as Energy banned its Russian swimmers I knew this season was getting cancelled. 0% chance the season was going ahead without their best swimmers. Now they get the brownie points for “banning them” without actually doing anything.

I wish the best for us those athletes that don’t have the large salaries. I takes a lot of time, energy, motivation, and funding to be at peak performance. The ISL gave funding and motivation to top athletes like Coleman Stewart that might not get major funding(until his world record he got during the ISL) and helped develop athletes into potential Olympians. In my opinion the ISL is increasing the depth of the swimming community and it’s a shame to see it’s not going to be around this year.

I agree – it was highly flawed, but it showed there was enormous upside to a venture like this for the swimming community. Perhaps it will still have played a part in evolving the movement towards a viable pro swim league.

Now FINA will be like “See? We told you that ISL wouldn’t work and you’d come crawling back to us!”

Expect the rosters for World Cups, Sette Colli, and the Mare Nostrum to expand significantly now. I’d also bet this announcement gets fencesitters to take that 5th year.