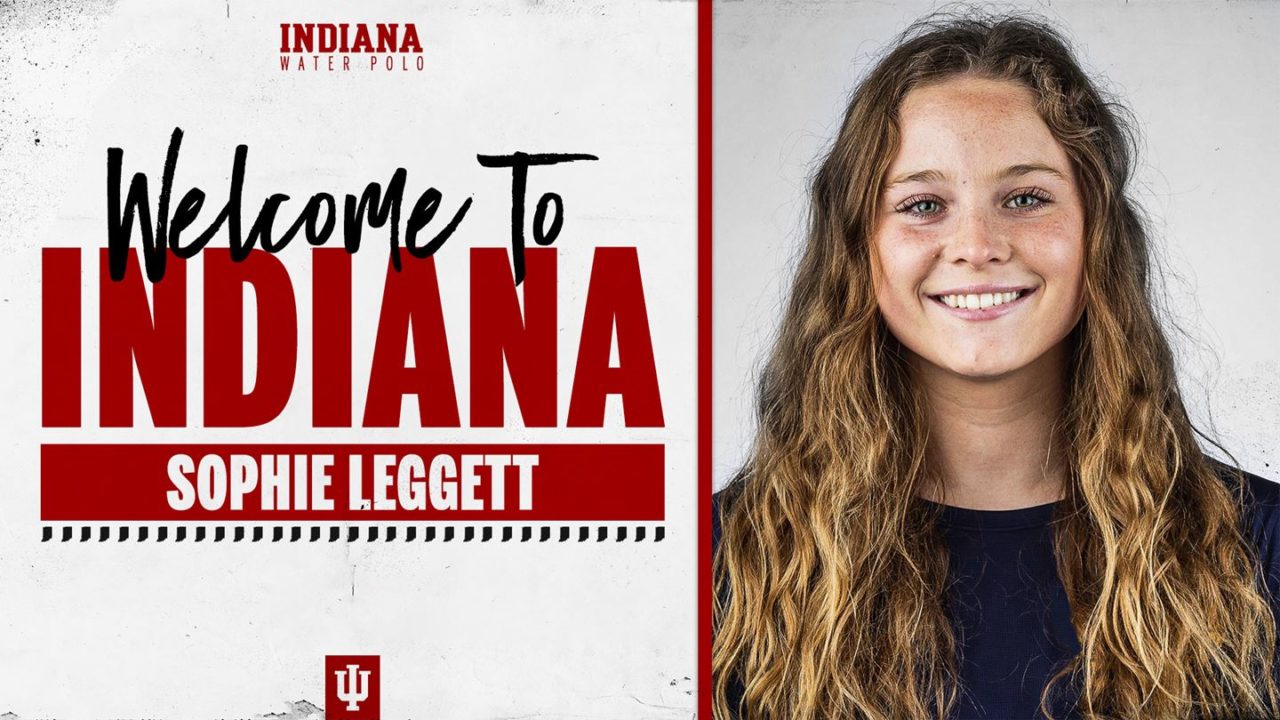 After receiving a medical redshirt from the NCAA in her only season with Cal, Leggett will have four years of eligibility remaining with the Hoosiers. Current photo via Indiana Athletics

BLOOMINGTON, Ind.—Indiana Water Polo head coach Taylor Dodson has announced the signing of University of California transfer Sophie Leggett from Santa Barbara, Calif. to the roster for the beginning of the 2021 season. After receiving a medical redshirt from the NCAA in her only season with the Golden Bears, Leggett will have four years of eligibility remaining with the Hoosiers.

In her only season with the Golden Bears, Leggett was the leading scorer with 10 goals in five games before medically withdrawing. Leggett scored a career-high and team-high four goals in their 8-5 victory oven then-ranked No.11 UCSB back on Jan. 18, 2020 and scored multiple goals in her final three games with California.

Prior to starting her college career, Leggett played one season for head coach Ethan Damato at Laguna Beach before moving and finishing her career playing for head coach Connor Levoff at Dos Pueblos. Leggett only played two seasons at Dos Pueblos due to an injury her junior season but finished All-Channel League First-Team as a sophomore and was the Channel League MVP her senior season. Leggett was also named a three-time All-CIF Southern Section selection.

In addition, Leggett played for the club teams SET and 805 and while a member of SET, Leggett was teammates with current Hoosier Tina Doherty. Leggett also competed as a member of the 2016 USA Cadet National Team and in the 2016 UANA Junior Pan American Championships.

Dodson also has a summer of experience coaching Leggett in club play during the summer before her freshman season and is excited to be reunited this winter.

“We are thrilled to add Sophie to our Hoosier family,” Dodson commented. “Sophie will immediately have an impact on our program in and out of the pool. A competitor through and through, she is a dynamic player. Sophie is a huge offensive talent but with a defensive mind. Throughout this process she and I talked a lot about finding a home and team that felt like family. Her contribution to our culture of togetherness is a perfect fit.”

During club play, Leggett earned Junior Olympic All-America status in the seventh and eighth grades and again as a 14U, 16U and 18U.

Leggett has dual-citizenship between the United States and Canada and will begin training with the Canadian Senior National Women’s Water Polo team for the 2024 Summer Olympics in Paris.

In her personal life, Leggett comes from a family of athletes with her mom, Jennifer, playing tennis at the University of Guelph in Canada and her dad, Keith, being an All-American water polo player at USC. Keith also played for the Canadian National team from 1988-1992. Her brother, Tom, is currently a junior at Oaks Christian High School in California and also plays water polo.

Leggett intends to major in business and cannot wait to join the program.

“I’m beyond excited to join the Hoosiers, a team of incredibly powerful women and I can’t wait to provide all that I can to the team. Indiana is such an amazing institution and I’m so happy to have found my new home. Go Hoosiers!”