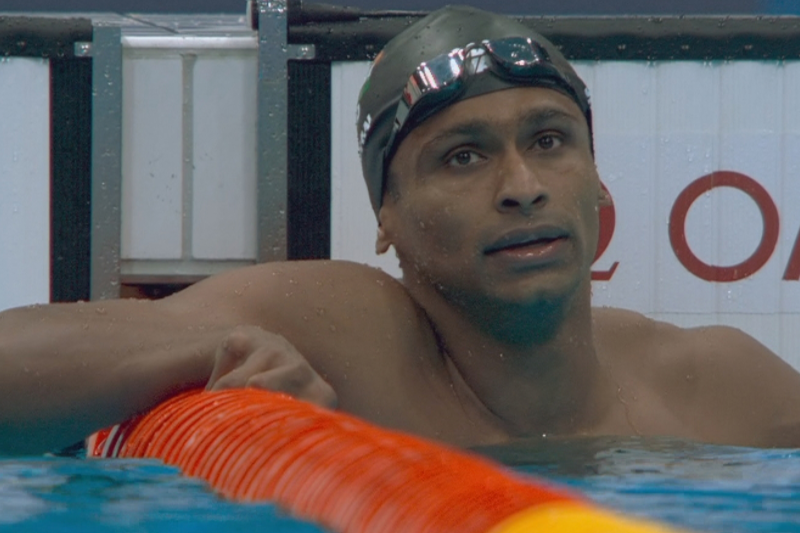 Srihari Nataraj and Sajan Prakash achieved FINA 'A' cuts at the end of June, but were unable to match their best times at the Tokyo Olympics. Archive photo via sonyliv

At the end of June, Indian swimmers Sajan Prakash and Srihari Nataraj made history by earning India’s first and second FINA ‘A’ cuts, also qualifying them for the Tokyo Olympic Games. A month later, both of the men competed at the Tokyo Games, but were unable to match their times from June.

A day later, Nataraj made the cut in the men’s 100 backstroke, swimming a best time of 53.77. The FINA ‘A’ standard was a 53.85. Both swimmers also set new Indian national records.

Nataraj went 54.31 in the 100 backstroke and was off his personal best by 0.54 seconds. That time earned him a 27th place finish. His best time would have placed him in a three-way tie for 15th place, giving him the potential to earn a spot in the semifinals if he placed in the top two of a swim-off.

In an interview with the Press Trust of India, both men expressed the difficulties of swimming high level meets close together in the year and tapering for the right amount of time.

“I didn’t have enough time to compete in the Olympics after Italy,” Prakash told the PTI. “We only had three weeks to start again. If I had three months it would have been a better performance.”

Prakash also spoke on his taper for the Sette Colli Trophy meet and how he prepared for the Olympics afterward. “I already tapered to the maximum for the qualification meet, went all out and then I had to come back again and start with the aerobic work, build it up, and then reduce it til the competition day. It needs at least six weeks’ time,” he said.

Nataraj shared the same taper and training difficulties. “I tapered for a good two-two and a half weeks for Rome. After that I had to re-train to get my base back and that causes fatigue. I require a lot of tapering, we had only three (weeks) after Rome. I didn’t have time to train and re-taper,” he told the PTI.

The last year was also not easy for either swimmer. Prakash battled a slipped disc causing a neck issue, and Nataraj dealt with inconsistent training due to COVID-19 as well as an injury he sustained while training. Prakash is now receiving treatment for his neck issue.

Although their Olympic performances were not what both swimmers wished for, they said they learned valuable lessons from the experience and have their sights set on future goals.

“Standing there on the block made me realize a lot of things. Getting close to the world standard with the A time and this experience will be very helpful for me in the future,” Prakash said.

Nataraj added: “I knew what went wrong. But more than the swim, I’ve learned how to prepare myself before, after the swim, during the meet. How to work on my fitness, recovery, what I eat.”

Both swimmers also mentioned their next major meet targets include the Asian Games, Commonwealth Games, World Championships, and potentially the Olympics.

This story got me thinking about the Uzbekistan qualifying meet where the Indian swimmer(s) alleged the timing system was rigged to help the Uzbekis (if that’s a word) qualify for Tokyo. Has anyone checked to see how those swims in question compared to their times in Tokyo, without a rigged setup?

Afaik those swims were not ratified by FINA

Their best times did not come from that meet (which were all nullified anyway). Prakash’s PB was set in Rome for example.

Well if they eat a Big Mac they will get faster!

That is offensive. First you assume they are Hindu just because they are indian, and then you make this rude comment. It’s like me saying to mark spitz that if only he ate more bacon, then he would have gotten 8 or 9 golds in ‘72

What do you have against bacon?

Nothing, it’s just not kosher and spitz is Jewish so it is similar to beef and Hindus

Oh well then NEVERMIND my bad!

they need to take notes from Hafnaoui

Three weeks is enough time between meets if you know what to focus on. It’s not necessary or possible to return to doing base-building aerobic work in an extended taper. You have to keep your aerobic capacity up by doing short rest repeats (essentially broken swims) and then allow time to recover from those efforts.

Congratulations to these swimmers on making their A standards. It’s a major milestone for Indian swimming.

Love to see SwimSwam’s ongoing coverage of the worldwide swimming family. We are all better as a result.