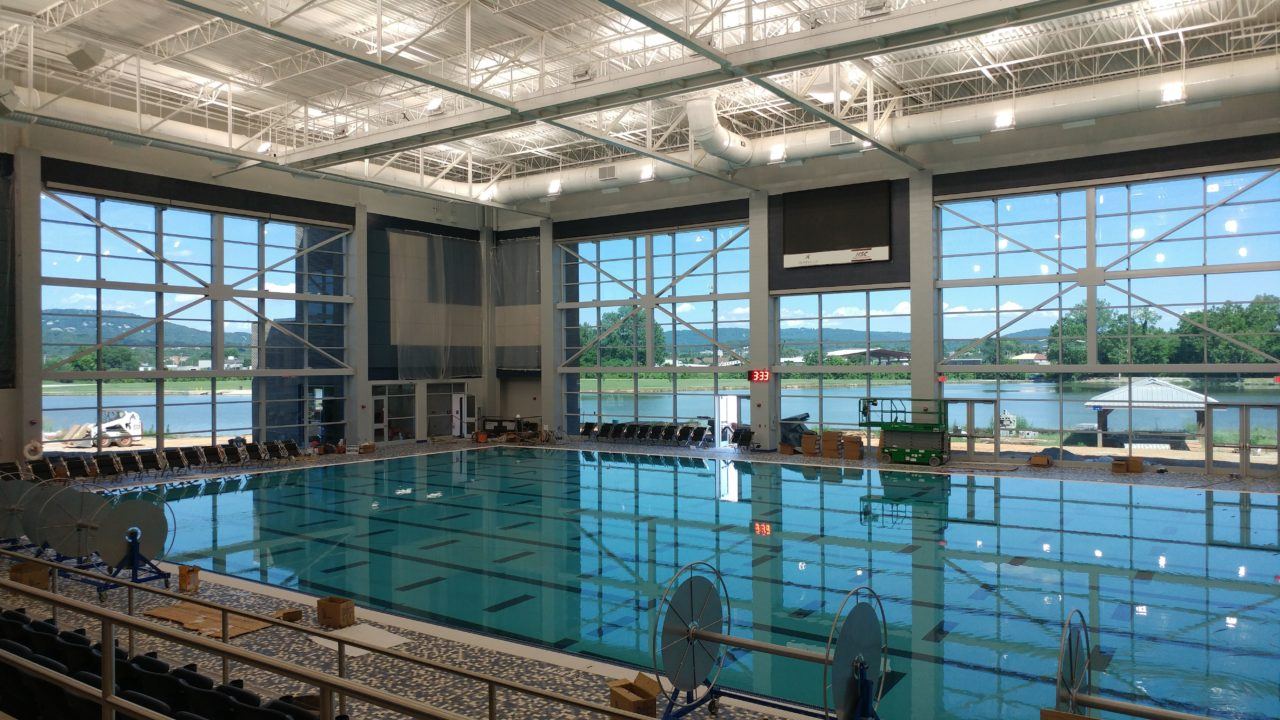 The $22 million renovation project at the Huntsville Aquatic Center moves one step closer to completionThursday, July 6, with the Competition Pool officially opening.

Huntsville Mayor Tommy Battle will attend ribbon cutting ceremonies at 3:30 p.m. The new addition features the largest seating capacity for swimming in the state and is one of three pools at the facility.

Located at 2310 Drake Ave., the HAC consists of the original 1974 Legacy Pool, linked by a new lobby and a walkway to the new uniform 7 feet deep Competition Pool. Both pools are Olympic size and will be utilized to host the USA Swimming Southeastern Championships, July 20-23.

According to City Of Huntsville representatives, the Instructional and Competition pools are electrically grounded. City management say the already opened Instructional Pool has a weather plan of continuing operation during storms with lightning, but suspending swimming during actual weather warnings. This policy is expected to be adopted for the Competition Pool.

The new complex has professional starting blocks and stadium seating for 1,403 spectators. Including the pool deck, the Competition Pool complex alone has a life safety capacity of 3,970 people.

The picturesque setting is enriched with tall south and east windows

The Competition Pool has generators to restore lights during power outages, but not to also run the filtration system.

Several activities are planned with the official opening of the new facility onThursday, July 6. RCSL teams will have block practice in the morning and afternoon at the site in preparation for the City Meet. Each team is allotted a 30-minute walk through and an hour of practice at the HAC before the meet, since this is the first time many of the summer league swimmers have used starting blocks.

Huntsville Swim Association will take a team picture at 2:40 p.m. At 3 p.m., a short ceremony honoring the Swim for Success volunteers is planned prior to the ribbon cutting. HSA, the main tenant, is raising $1 million in a separate capitol drive to help the HAC.

Since the new pool is opening and the Legacy Pool closing for renovations, the RCSL City Meet is hosted at two separate locations this year.

The Showers Center features two 1-meter Durafirm diving boards. This is the first time divers vie for city titles at this site.

“There are five dive teams competing this season for the city championships,” said RCSL 2nd Vice President and Dive Chairman Tommy Kibler. “The meet has been moved to the Showers Center because the Legacy Pool at the Aquatics Center will be undergoing renovation for the Southeasterns during the time of the City Meet and part of that process will be replacing the diving boards. We feel the Showers Center is a good location to host our championships.”

For swimming, athletes and spectators shuttle to the Aquatics Center from Joe Davis Stadium via city bus transportation. The meet is expected to include more than 1,500 competition swimmers. With the addition of spectators, the RCSL will again utilize the Huntsville Police Department’s K-9 range adjacent to the HAC where teams can stage under canopies.

“The actual pool deck inside the new complex is closed to parents,” explained 1st Vice President and RCSL City Meet Director Chris Chance. “They cannot walk their kids up to the blocks. They are invited to watch from the enclosed indoor stands above the pool deck inside the facility. For the younger swimmers, coaches and volunteers will assist them on the pool deck. Other than that, we are setting up tent city like we did last year at the HPD K-9 range. There will also be food trucks and vendors on site.”

Besides moving over from the Legacy Pool to the new facility, the RCSL will also utilize the Instructional/Therapy Pool at the Aquatics Center.

“We’ll use that pool as the warm-up and cool-down pool,” said Assistant City Meet Director Scott Thomas, who is also a 1st VP. “They will have the water temperature adjusted to the right level for this level of swimming. This will be an advantage, especially for the younger swimmers, who see people diving in and can react by false-starting. It should also help with the traffic control and noise.”

City Swim Meet features 18 teams from area pools all around Madison County. Athletes compete at a neutral site in individual events and team relays for overall league individual and team titles as well as league standings. Each team recently completed five dual meets on a home and away basis during the regular season.

City Meet swimming begins on at 8:45 a.m.each day, with 10-and-unders competing in the morning sessions and the older athletes in the afternoon.

The City Diving Championships start at 9 a.m. on July 7. The younger divers spring into action first. The meet breaks for an hour atnoon, before the older divers compete in the afternoon. The popular Dive Meet culminates with the open division. All of the events at both venues are free to view.

“We are very excited about this year’s City Meet,” said RCSL President Justin Olander. “Everything is run by volunteers. It is quite a humbling experience when you think about all the things that have to come together to host this meet and we are very grateful to everyone contributing to its success.”

For those of us of a certain age (more than 50 years ago), a swim meet in Huntsville was at an outdoor, public pool known as the Big Springs Pool. What is most memorable about that pool was the water temperature, reportedly fed from the namesake “big springs.” It was incredibly cold, so much so that many took very short warm-ups (or cold-ups) and some claim their times improved because they were in a hurry to get out.