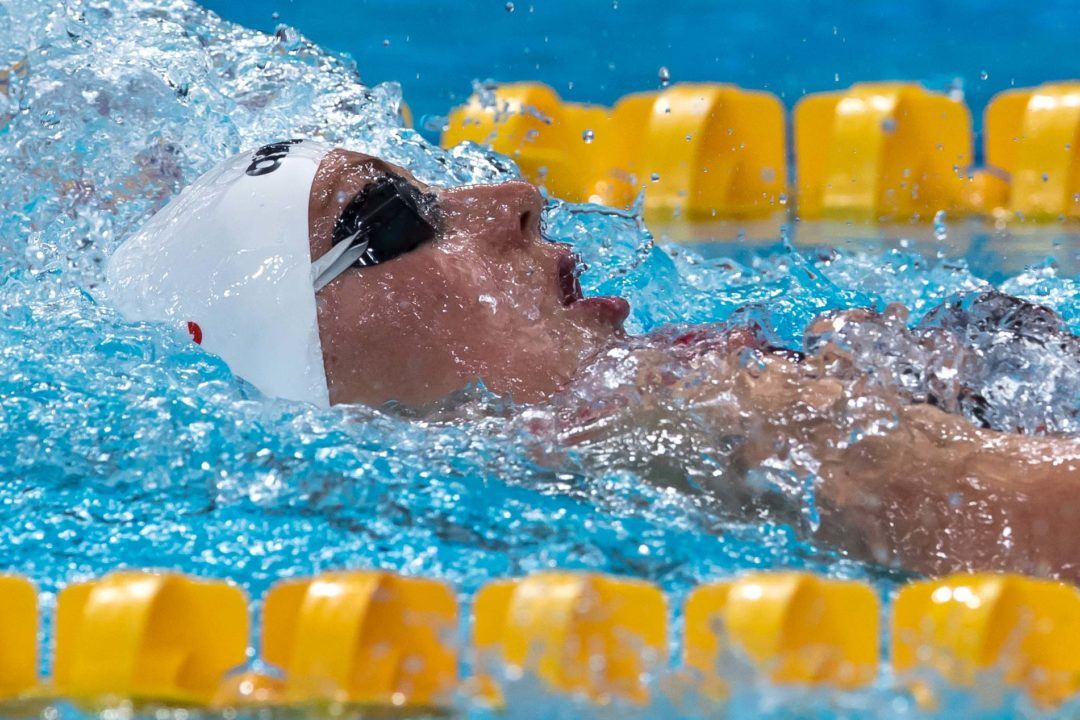 With the World Championships coming to Budapest, the Hungarian team had added pressure to perform to their best. Tonight, multiple swims on both the men’s and women’s side showed the world that Hungary is deeper than just Katinka Hosszu and Laszlo Cseh, and even better, that a lot of their nation’s talent is just getting started.

The biggest Hungarian statement today came from the men’s 4×100 free relay– not usually an event in which Hungary has ever excelled at. In fact, they have never made the podium in this race at a LC World Championships or an Olympic Games, ever. If there’s ever a time for emphatic firsts, however, it’s on home turf at a major international championship.

Buzz began during prelims, with Dominik Kozma leading off in 48.61 to break the national record. He was followed by Nandor Nemeth (48.51), Peter Holoda (48.08) and Richard Bohus (48.07) to combine for a 3:13.28, good for fifth after prelims and smashing the Hungarian 4×100 free relay record by almost two full seconds. All but Nemeth were on that record-setting relay from Rio, but Bohus and Holoda were both at least a half-second faster than they were in Rio.

In tonight’s final, the Hungarians really shined. Kozma went 48.26, taking another large chunk out of his national record, followed by a great 48.04 split from Nemeth, who is only 17 years old. Holoda was a bit off of his morning swim with a 48.48, but it really didn’t matter, as Bohus unleashed a monster split of 47.21, the third-best split in the field (not adjusting for flat start/flying start discrepancies).

The Hungarians ended with their first medal in this race at a major LC summer meet, going 3:11.99, a marked improvement from their 3:15.21 national record prior to this meet. They also did so without Laszlo Cseh, who has been the most well-known Hungarian male swimmer during his storied career.

Success was not limited to this relay, though, tonight in Budapest. Two Hungarians raced the women’s 400 free final, with Boglarka Kapas and Ajna Kesely finishing 5th and 6th, respectively. It wasn’t a great swim for Kapas, but it was a lifetime best for Kesely (4:05.77), who keeps getting better. The 15-year-old is a fast-rising star for Hungary, and if she keeps getting better, she will be very dangerous in Tokyo– but probably much sooner.

Meanwhile, Katinka Hosszu set herself up nicely for a great swim in the 200 IM final tomorrow, and she will likely be winning Hungary’s first gold at this meet.

Laszlo Cseh and Liliana Szilagyi just missed the finals in their 50 fly and 100 fly, respectively. Still, Cseh’s 50 fly is far from his best event, and he’s not one of the newcomers to the international scene. Between Tamas Kenderesi and WJR holder Kristof Milak, there is plenty of young butterfly speed for the coming years. Szilagyi was a crushing 9th in the 100 fly semis, but her 57.75 was a great swim for her, just .05 off of her national record, and she’s much better in the 200. In the women’s 4×100 free relay, though they did not make the final, the Hungarians beat Italy (holding off Federica Pellegrini) and swam well without Hosszu.

The disappointing swim came from Daniel Gyurta, who was only able to manage a 1:00.76 in the men’s 100 breast for 26th, well outside of semifinal qualification. He’s much better in the 200, but the former world record holder is on the last legs of his career, and Hungary will be looking for new breaststroke talent to fill his shoes.

Overall, though, Hungary made its presence known on night one, and you could feel it. The crowd went nuts every time a Hungarian swimmer showed up to swim behind the blocks, even for prelims, and many of their national team-ers delivered today.

Brownish — thanks for the catch. For some reason, the results page for European Jr Champs had his birthday at January 1, 1999, which is why I thought he was 18. Thought I could trust those. I’ll fix it!

Theese Juniors and some rankings are different thinking facilities. We are (also as parents) talking about the date of birth -and sometimes the hours :)- , they are thinking about the year of birth. That can be the case.

It worth to note that because of trying to save Hosszu’s ‘ironness’ Hungarian women team has not made final. Why didn’t Hosszu swim relay in the morning making Hungarian relay #9?

Because even with her, they would just make the final and finish 7th-8th there, she will swim the 4×200 where the chances are better

She will only swim relay finals, no heats.

Even with her, the HUN W4X100 would still have been something like 5sec away from the medals. Their W4X200 (incl her) does, however, look a legitimate chance of a bronze medal. Simply a case of assessing what would be worthwhile expenditures of her energy as against pointless exercises.

@COMMONWOMBAT, BROWNISH, ZER0Z
If Hungarian team is so hopeless then why to swim prelim at first place? Why Pellegrini or Sjostrom swim in relay that have no chances for medal. I don’t follow your logic unless we agree that Hosszu doesn’t care about relay if it doesn’t bring her some benefits. It looks that she is glad with this #9 place as a good excuse not to swim this useless to HER race.

We have a team in every relay and at least one swimmer in every event. Never happened this. Hosszu has six individual events (and much more km), SS and Pellegrini not.
We would need Hosszu with her maximum speed in the relays, can’t give her a medal (mostly gold) as the USA to KL. Otherwise SS swam WR in relay, she said that was the plan. And Jakabols held Pellegrini till the finish, yesterday.
I’ve already written. Their is an agreement with Csaba Sos and coaches of the other’s. She will swim in every final, but no prelims. It’s clear and known. Please don’t look for another explanation that simply can’t be true only overthinking and overreading.

Calm down lots of factors affected this, like two relays being dqued

Hungary beat both of the DQd teams anyway

Look around, it was a pure 3d place, We were far ahaed of them before their DSQ.