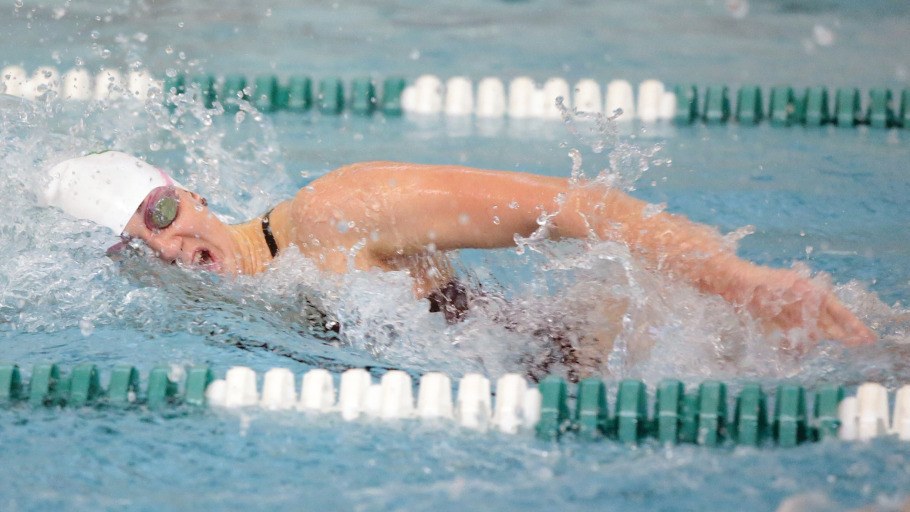 The North Texas Mean Green and University of Houston Cougars faced off Saturday afternoon in a dual meet. Both teams were fresh off Friday night duals (North Texas hosted Rice and Houston visited Southern Methodist) when they arrived for their noon meet in Denton, Texas.

The Cougars’ freshmen class had an especially strong showing. Individual event wins by freshmen included Laura Laderoute in the 100 back and Gaby Jiminez Peon  in the 400 IM. Additionally, freshman Syed Larson took home a win in the 1000 free, leading the field by nearly 9 second. Second to the wall was sophomore teammate Conor Glen. Larson would go on to win the 500 free by a margin of over 4 seconds, as well.

Sophomore Eleanna Koutsouveli was first to touch in the 200 back, while upper classman Sharo Rodriguez Rivera swept the butterly events.  Micaela Bouter and Lauren Burrell took home 1-2 finishes in both the 1 and 3 meter diving competitions.

Meanwhile, the host team bookended the meet with wins in both relays. The team of Jowita Sienczyk, Sarah Vaisse, Kelsey Opiela and Emmabeth Jensen  led the Mean Green with a win in the 200 Medley (1:45.33). Isabelle Morris joined Vaisse, Jensen, and Sienczyk to close the meet out with a Mean Green win in the 2o0 Free (1:36.65).

The Mean Green’s relay performers also had individual successes. Morris swept the sprint free events, taking home wins in the  50 (24.37), 100 (53.12), and 200 (1:53.56). Vaisse won her second 100 breast competition for the weekend. She was joined by teammate Claudia Kitching in a North Texas sweep of the breaststroke events.

The Cougars will return to action next weekend at the Rice Invitational, while the Mean Green will next compete at the Houston Invitational from Nov 18-20.

DENTON – The North Texas swimming and diving team dropped another closely contested meet to the Houston Cougars, 160-140, on Saturday at the Pohl Recreation Center.

“On paper, teams count us out based on the results to this point in the season,” interim head coach Brittany Roth said. “Our girls take on this underdog mentality and they really thrive when teams discount them. They rise to the challenge and go after it.”

Right out of the gate, the Mean Green were ready to go, securing a victory in the 200-yard medley relay. The relay team comprised of Jowita Sienczyk, Sarah Vaisse, Kelsey Opiela and Emma Beth Jensen finished with a time of 1:45.33 to secure the top spot.

North Texas went onto sweep the relay events, winning the 200-yard freestyle relay as well. The relay team comprised of Vaisse, Jensen, Sienczyk and Morris clocked a time of 1:36.65 to edge the Houston relay team (1:37.31).

“It takes some unique personalities to get up for a relay,” Roth added. “Those are the kinds of athletes that get up and perform for other people. They want to win for the team and we have a really talented group of swimmers who compete on our relay teams.”

Isabelle Morris shined throughout the meet for the Mean Green, securing three individual victories on Saturday. She claimed her second victory of the weekend in the 200-yard freestyle, finishing with a time of 1:53.56. Morris also finished with the top times in the 50-yard freestyle (24.37) with  and the 100-yard freestyle (53.12).

Vaisse once again dominated the field in the 100-yard breaststroke, claiming her third victory of the season in the event with a time of 1:04.03, over a full second ahead of the Houston swimmer who finished with a time of 1:05.22.

Claudia Kitching secured her first win of the afternoon in the 200-yard breaststroke, clocking a time of 2:19.56. This was her second victory of the season in the event, as she secured the top spot in the Little Rock Invitational as well.

Jensen, who secured victories as a member of each relay team, finished second in her other event, the 50-yard freestyle, with a time of 24.38, a split second behind Morris’ winning time of 24.37.

On the diving side, North Texas secured the third, fourth and fifth spots in both the one and three-meter boards.

On the three-meter board, Silva (231.83) and Allison Crites (219.38) each recorded a new personal best in the event. Silva’s score was good for third and Crites finished fourth.

“It went pretty well for us today,” diving coach Mark Murdock said. Our divers are showing more consistency through each of their dives and Gabby and Allison really stepped up on the three-meter board. That helped us out today.”

Up Next For North Texas

The Mean Green diving team will return to action for the Texas Diving Invitational beginning on Nov. 17 and concluding on Nov. 19 at the Lee and Joe Jamail Texas Swimming Center in Austin. The swim team will compete in the Phil Hansel Invitational that same weekend in Houston.

“It wasn’t a pretty win, but a win is a win,” Swimming and Diving Head Coach Ryan Wochomurka said. “Overall, I’m very impressed with the toughness and resilience we showed not only this weekend, but over the last three weeks through one of the toughest stretches of training we will face this year. That is exciting as we look forward to next weekend at Rice and the following weeks at the Phill Hansel Invitational and the US Nationals.”

Laderoute won the 100-yard backstroke event for the Cougars. The West Linn, Ore., native, netted a time of 56.88 to capture first overall. In the 200-yard backstroke, Koutsouveli finished with a time of 2:03.31 to edge out Laderoute for first by 33 milliseconds.

Rodriguez swept the butterfly events against the Mean Green. In the 100-yard butterfly, the Queretaro, Mexico, native, netted first touching the wall at 57.70. Rodriguez also won the 200-yard butterfly with a time of 2:05.66.

In the 400-yard IM, Jimenez captured first overall netting a time of 4:32.51 to get another win for the Cougars in the final individual event of the meet. Houston also placed second with Koutsouveli touching the wall at 4:34.20.

On the boards, Bouter swept the springboard events. The Johannesburg, South Africa, native, earned a first-place finish in the 3-meter dive with a score of 326.55, a 61.50 point difference between first and second. Bouter would also take first in the 1-meter springboard after capturing a score of 298.35.