Feeding The Stomach And The Soul 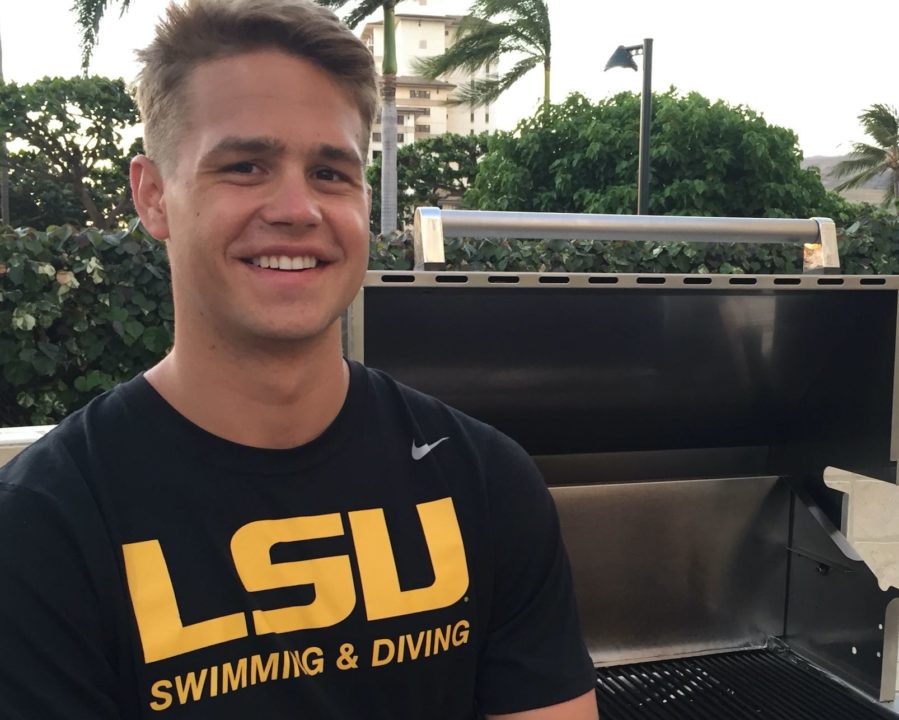 Thomas Smith was a standout in the pool and the classroom, but all of his success was almost overshadowed by tragedy. Archive photo via Thomas Smith

With the world shutting down, we’re reaching into our archives and pulling some of our favorite stories from the SwimSwam print edition to share online. If you’d like to read more of this kind of story, you can subscribe to get a print (and digital) version of SwimSwam Magazine here. This story was originally published in the 2017 College Preview edition of SwimSwam Magazine.

The afternoon prior to a recruiting weekend, the coaches at Louisiana State University would gather the team together and give quick bios for the incoming visiting prospective student-athletes.

I will never forget when our coaches started talking about a then-high school senior, Thomas Smith. After listing off his numerous accomplishments (he had already qualified for the 2016 Olympic Trials, broken 12 national age group records, was a 17- time Athletic high school All American was a 2-time USA Swim Senior Nationals Finalist, and was the number one 200 backstroker in the 2015 recruiting class), they shared that LSU was in the running. We knew when he chose to be a Tiger that he would make a huge impact in the water, but none of us were aware of the impact he was about to make outside of the pool.

From the moment he stepped on campus, Thomas was the definition of a consummate student-athlete. He broke the 200-backstroke school record, earned SEC freshman swimmer of the week honors and was named All-SEC member. In the classroom, he was named LSU student – athlete of the month because of his 4.0 GPA during his first semester and he spent a lot of his time volunteering around the community.

Thomas’ success in the pool and the classroom were almost overshadowed by tragedy. When he was 12 years old he was diagnosed with cancer in his lymph nodes. He underwent surgery and beat that cancer, but two years later it returned in the bone on his knee. His cancer is now dormant, but if it becomes malignant, his doctors will amputate his leg from just above the knee.

Yet Thomas has never let the cancer get the better of him. “Swimming is a sport of constant resistance, both physically and mentally. It epitomizes an individual refusing to give in and push through, even the resistance of me having cancer.”

In the face of it all, Thomas Smith continued to persevere under trial. Just two weeks after being informed that he could potentially lose his leg, he and three of his teammates broke the boys’ 15-16 national age group record in the 400 medley. Thomas began reaching out to others, getting involved in the NEGU Foundation (Never Ever Give up- a foundation for kids fighting cancer) and taking annual trips to Mexico to work with an orphanage in Tijuana.

During his freshman orientation, Thomas met a young man who invited him to dinner at his family’s house in Baton Rouge. Thomas was drawn in by the family’s warm welcome, and immediately felt at home in Baton Rouge. He felt compelled to share with others the southern hospitably he had received, and thought that he could best do this through cooking for others.

He learned to cook in his Southern California home after school while his siblings were at practice and his parents at work. “I would take whatever we had from the fridge, and just start cooking,” he explained. This is a direct reflection of his outlook on life, which allows Thomas to take what he has and roll with it.

He started cooking for the team on Sunday nights during the spring semester. He would spend all day marinating chicken and beef for us, and then grill it. From scratch, he made guacamole, pico de gallo, and salsa. He never asked us for money or help; Thomas just wanted to feed his team, and give us all a great reason to spend time together outside of practice.

Before long, Thomas’ tacos became known beyond the swim family and LSU students began to ask where they could buy his tacos. Responding to the interest, Thomas began selling them for $2 and donating all the proceeds to neighboring Baton Rouge elementary schools.

I asked Thomas what keeps him going and what motivates him, he said “the unknown of serving new faces and hearing untold stories I would never have heard in the future without the tacos.”

While Thomas recognizes all that he may have, and could potentially lose if cancer reactivates, he is even more aware of what others struggle with and how blessed he is despite the challenges.

“Baton Rouge showed me that there are people who need tangible things, that I have taken for granted. To turn people away because they don’t look like you, or don’t come from a particular economic status that you grew up in, to neglect those people is absurd. No matter what people have tangibly… every individual wants to be fed with encouragement and inspiration e is despite the challenges. That is what I feel I can provide. I feed them with tacos, and a listening ear.”

During his freshman year, Smith spent a lot of his time volunteering at local events. He believes that swimming is momentary, while being a person of humanity is forever and he wants to leave behind a legacy greater than swimming records. Thomas has chosen to give all of the proceeds to Baton Rouge because he has learned so much in just his first year. “If I am not recycling and giving back to the people around me, I am wasting a gift. That is what I love about Baton Rouge… there are people that do not stop pushing you.”

Thomas Smith lives by the slogan: Serving College Students with Great Food, For an Even Greater Purpose. He is leaving behind a remarkable legacy and impacting the lives of his teammates, the LSU student body, and the greater community of Baton Rouge. In just the year I have known him, I have altered my way of thinking and count my blessings daily.

“We begin to elevate others when we see the end of ourselves, but we surge forward whole heartedly with joy regardless.” – Thomas Smith