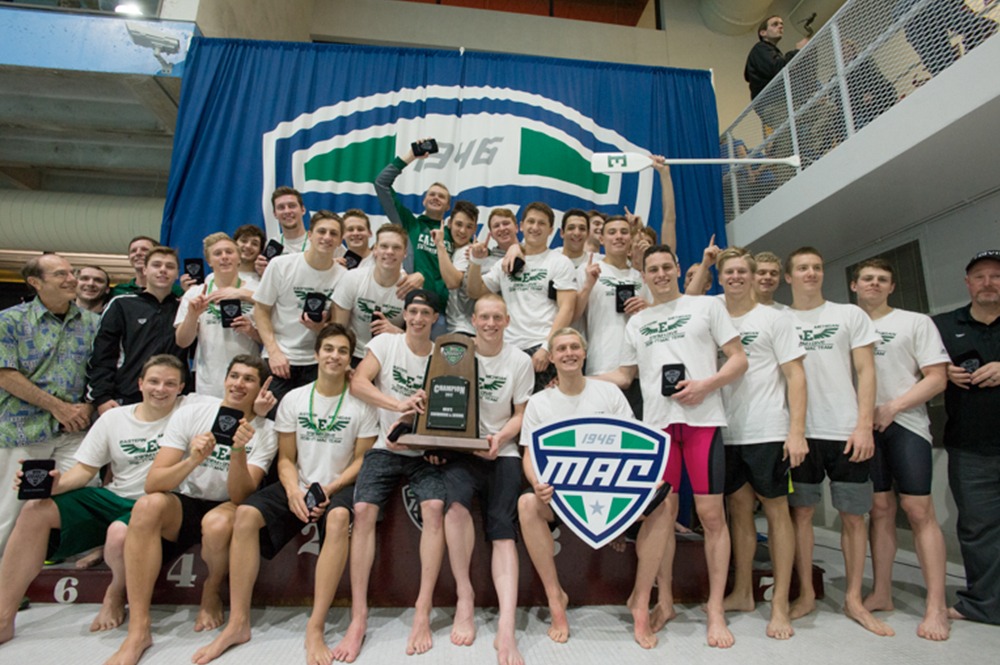 The College Swimming and Diving Coaches Association of America (CSCAA) honored Peter Linn, head coach of men’s and women’s swimming at Eastern Michigan University, with its highest award, the National Collegiate and Scholastic Trophy*, at its 58th Annual Awards Banquet on May 7, 2018 in Evanston, Illinois.

Despite its long tradition of excellence (a combined 296 individual MAC Championships –254 men and 42 women– in Linn’s tenure), Eastern Michigan University announced that it would be dropping men’s swimming and diving, along with softball, women’s tennis, and wrestling, on March 20. After EMU Accounting Professor Howard Bunsis estimated the cuts would cost the school $61,000, a “broad coalition of students, alumni, faculty and staff” held a rally to protest the cuts on April 16. University of Michigan head swim coach Mike Bottom even pledged a $10,000 donation to save the program. Yet in the end, the EMU decision held fast, and the men’s team will not be back in the fall of 2018.

In addition to developing great swimmers, Linn has been a mentor for numerous coaches. Jon Urbanchek said about Linn, “I wouldn’t be here without Peter. We are the best of friends – wet or dry. Peter was awesome and could put my ideas into words to help coaches understand what we do.” Jim Richardson gave a similar assessment: “Peter Linn is absolutely the smartest coach I have known. He has as deep an understanding of every facet of developing swimmers to their potential as any coach on the planet. Jon and I refer to the years when Peter would join us during the summer with Club Wolverine as the ‘golden years.’ He was an integral part of the successes we enjoyed during those years.”

*The National Collegiate and Scholastic Swimming Trophy is presented annually to an individual or organization which, in the estimation of the recipient’s peers has contributed in an outstanding way to swimming as a competitive sport and healthful recreational activity.  This award is also presented by NISCA to the individual or organization which has made the most significant contributions to aquatic sports at the interscholastic level.

Peter is THE man.

Simply the best! I have learned so much from Peter over the years and am very thankful.