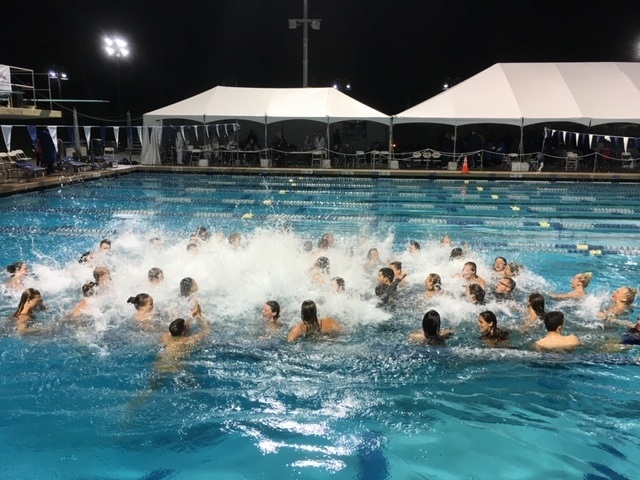 After some near-misses for NCAA qualifying at the MPSF Championships, Hawaii earned 2 new individual and 1 new relay qualifier on Saturday in Athens. Archive photo via Elliot Ptsanik

The University of Hawaii swim team is a long way from home in Athens, Georgia. That didn’t stop them from owning the first day of the University of Georgia Last Chance Meet on Saturday night, though.

Hawaii picked up at least 3 new NCAA qualifying times on the day, starting with Finnish-born junior Olli Kokko in the 100 breaststroke.

In prelims, he improved his season-best time from 52.61 to 52.48, which is probably on the right side of the bubble. Leaving nothing to chance, in finals he dropped that to a 51.86, which is a rock-solid NCAA invite time (and a Hawaii school record, breaking his own mark of 52.61 set last season).

The icing on the cake came in the 200 medley relay, where the Hawaii men swam a 1:24.51 to slide under the NCAA “A” cut by .05 seconds. They had missed the time by just .01 seconds at their conference championship meet. They don’t have any “B” cuts, so for now, that’s the only relay that they’ll be eligible to swim at NCAAs.

Wyatt Amdor of Kentucky went 52.43 in 100 Breast Final, dropping from 52.68 at SEC Championships. That may be good enough to qualify Kentucky’s relays as well (one A relay, three B relays) since they do not have another individual swimmer in the meet yet.

Georgia men 400 IMers stepped up too!

Hmm…those swims aren’t showing up on the results page. I don’t see any Saturday 400 IMs.

Ok I see it now, thanks.