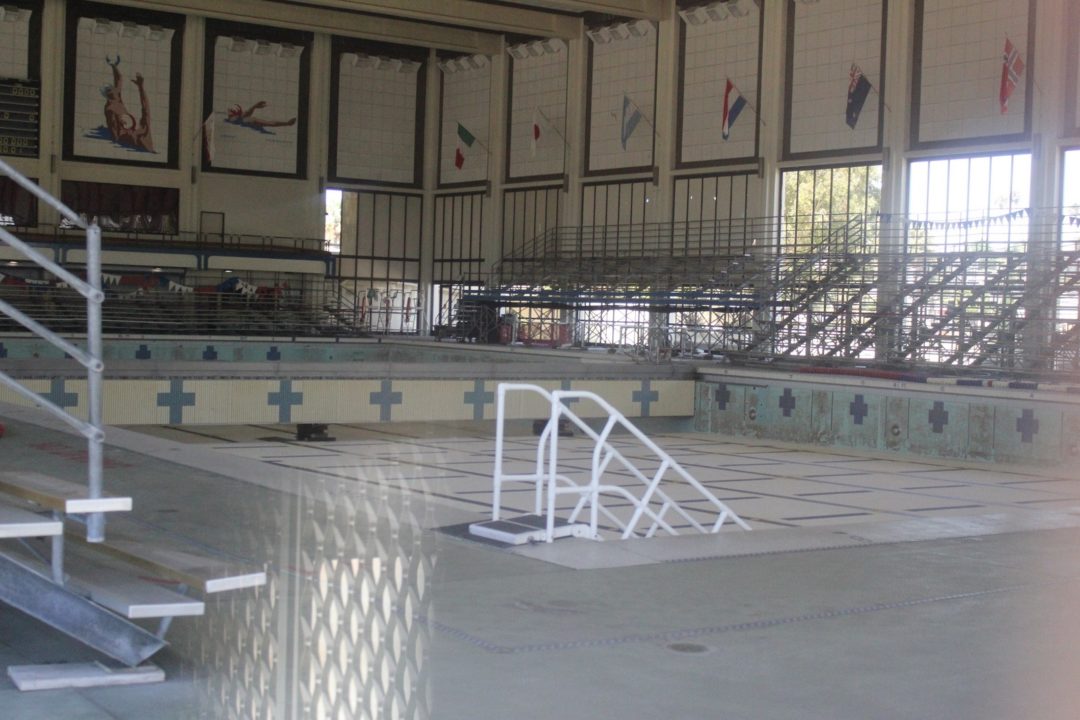 The old Belmont Plaza pool is set to be replaced by a new indoor facility in the coming years, though there's still a few details to be worked out. Archive photo via Kevin Chaney

Thanks to Lucy Johnson for her contributions to this report and her ongoing support of our coverage of the Belmont Plaza project.

The City of Long Beach has selected Harley Ellis Devereaux Corporation (HEDC) to provide architectural and engineering services for the rebuild of the Belmont Plaza Pool – a contract worth $7,858,731, according to a letter from the City Manager’s office dated for March 4th, 2014. That will now await what is expected to be quick turnaround on Mayoral and City Council approval, and then the new design can start to be finalized.

Read the full letter to the City Council here.

HEDC was selected among five finalists for the job based on a number of categories, including “substantial relevant experience on iconic, world-class and public facilities.” Those five were:

The document outlines specific reasons for why Harley Ellis Devereaux was selected, which includes a ‘team’ approach that has them working in association with Hastings + Chivetta, Roto Architects, and perhaps the United States’ best-known natatorium designer Counsilman-Hunsaker to tackle the job.

The City Council meeting will be held on March 4th at the Long Beach City Hall Council Chambers, and the public is invited to attend.

An issue that we had thought was settled was regarding a separate diving well. The local competitive aquatics community is hugely in favor of a separate indoor diving well, rather than simply putting the diving equipment at the end of the current large pool. The primary argument is the different requirements for depth, water temperature, etc. that is needed for divers and for swimmers, but the more unspoken reason probably has to do with the ability to run diving and swimming practices concurrently, and simply having more pool space. There’s also a question of installing movable flooring system, which goes back to the balance of the facility, as a public facility, between uses as a high-level, international-capable aquatics venue versus its use for the general community.

The general community would have a need for a shallow-water pool, for play, for therapy, and for learn-to-swim uses. The competitive swimming and water polo communities would prefer an all-deep pool (at least 7 feet, preferably 10 feet) to meet FINA standards. The proposal calls for a study of the ‘feasibility’ of putting in a movable floor to accommodate both purposes in full – with feasibility being a euphemism for “do we want to pay for it?”

There are several options for this type of system – one is a fully movable and adjustable system, and another is a “shelving system” that allows for a more rudimentary “shelf” to be installed when a shallower pool is needed that would simply cover up the bottom 6 feet, for example, of a 10 foot pool.

If some arrangement cannot be met for a movable floor or for adjustable depths, the likely outcome is a half-shallow, half-deep pool.

The firm was founded in 1908, giving it an impressive history of design, and has offices in Chicago, Detroit, Los Angeles, San Francisco, and San Diego.

Among the aquatic facilities listed on their website include:

They’ve also worked on several school-related and major architectural projects. While their specific expertise in indoor aquatics centers is not the broadest, their partnership with Counsilman-Hunsaker closes up that hole, and HEDC certainly has a wealth of major project design experience that will translate well to any project on the scale of Belmont (~$62 million).

It seems like this Belmont reconstruction just isn’t going to end up being built in a way that favors competitive swimming. Its pretty dissaopointing for us, but the old pool was not just the premier short course facility that we see it as. It was a big part of the community and it was used by many more than just competitive swimmers.

I don’t know much about this company but I do know that Oaks Christian, one of the pools it has built, is a couple inches short and cannot host long course meets because of that. The story is that the company never accounted for the tiles and plaster that would be placed in there after the concrete… Read more »